The House and Senate failed to reach a compromise on a sweeping energy policy bill with numerous R&D-related provisions before the end of the 114th Congress. The effort may be revived in the new Congress, but the character of the bill could change considerably since the Republicans will control the White House as well as both chambers of Congress.

A two-year effort to extensively revise U.S. energy policy for the first time in a decade broke down in the waning days of the 114th Congress, though the reasons why remain unclear. The bill would have updated policies underpinning various programs and activities of the Departments of Energy and Interior, and it contained numerous provisions on subjects such as energy R&D, energy infrastructure and supply, natural resources development, and conservation.

In September, the two chambers convened a conference committee to resolve differences between the Senate’s bill and the House’s amended version. However, after the November election, momentum for finalizing the bill appeared to wane, especially in the House.

Ultimately, members of the House asserted that time ran out to finish the legislation, but some senators claimed that the chambers had been on the cusp of reaching a final compromise. In a speech just before Congress adjourned in December, Sen. Lisa Murkowski (R-AK), the bill’s lead sponsor in the Senate, accused the House of ignoring the Senate’s final negotiation efforts and then adjourning prematurely. 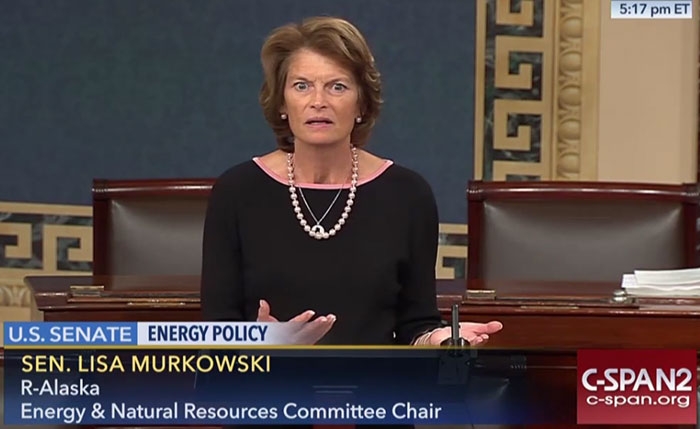 In a fiery floor speech, Murkowski accused the House of ignoring the Senate’s good-faith efforts to reach a final compromise on the sweeping energy policy reform bill.

She lamented in particular that Congress’s considerable investment of time and painstaking effort had come to nothing, remarking:

Senator Cantwell said we were doing the ‘normal’ process. But I think what we are doing now is extraordinary. It is not normal—because it seems that, if there is guerilla warfare that is going on, that seems to be the way to move a bill nowadays. That does not send a very powerful message nor set a good example for how to advance a consensus measure such as we have with the Energy bill.

It is unclear what the final points of contention were, as no draft of a compromise bill was ever publicly released. However, Murkowski alluded to nuclear and innovation-related provisions being among those subject to final negotiations, alongside provisions relating to natural gas exports, wildfire budgeting, hunting, water management, and public lands.

Notably, the House’s amendment to the Senate bill included all of the DOE-specific provisions from the House’s controversial “America COMPETES Reauthorization Act of 2015.” During the opening meeting of the conference committee, House Science Committee Chairman Lamar Smith (R-TX) said that this section of the bill “prioritizes basic research, decreases spending, and requires the Department of Energy to reduce waste and duplication and more effectively invest limited federal resources.”

Among its controversial provisions, the House bill would have significantly reduced the authorized funding levels for the Office of Science’s Biological and Environmental Research Program, the Office of Energy Efficiency and Renewable Energy, and the Advanced Research Projects Agency–Energy. The bill also would have placed certain restrictions on climate research funded by DOE and would have prevented research funded by DOE’s Office of Fossil Energy from being used in regulatory assessments. In contrast, the Senate bill authorized top-line funding increases for the Office of Science and ARPA-E and did not place any such restrictions on DOE research.

The chart below shows the top-line authorizations and appropriations for the Office of Science from these and previous bills. 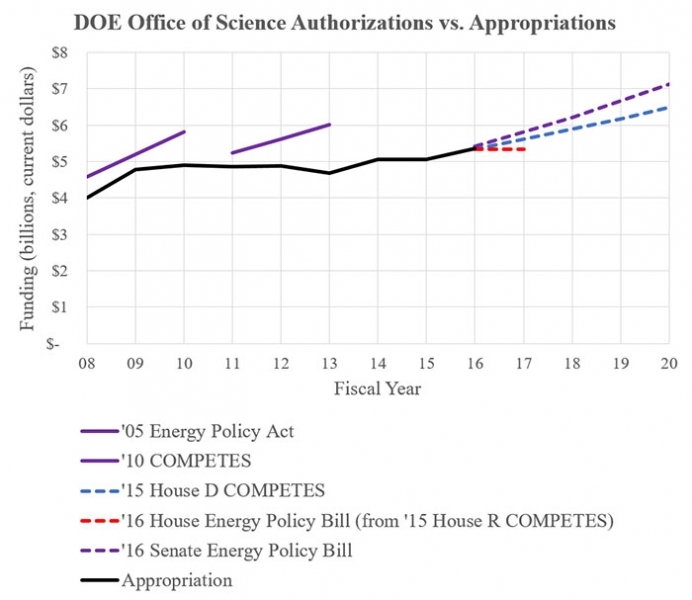 The House Science Committee’s report on the COMPETES bill contains a summary of the majority and minority views on these provisions. Energy Secretary Ernest Moniz outlined his objections to certain provisions in a letter to the committee. See FYI 2016 #108 for a more detailed comparison of the science provisions in the House and Senate bills.

Outlook for the 115th Congress

Congress may make another attempt at major energy policy reform in the 115th Congress, which convened on Jan. 3 and runs until January 2019. However, the effort would likely not begin for some time since Congress will likely first focus on dismantling the Affordable Care Act, confirming President-elect Donald Trump’s cabinet appointees, finalizing spending legislation for fiscal year 2017, and crafting new appropriations bills for fiscal year 2018, among other priorities.

With the change in presidential administration, the energy policy package could be up for major renegotiation. Nevertheless, any bill will still have to make it through the Senate, where the Republicans have only a slim majority of 52 members, down from 54 in the previous Congress.

Proposals for more extensive changes to the Department of Energy have begun to surface, although there is no indication yet of whether they will gain traction in Congress or the Trump administration. One example is a white paper released this week by Rep. Kevin Cramer (R-ND) that proposes merging DOE and the Environmental Protection Agency into a “Department of Energy and Environment.” Cramer, who reportedly is one of Trump’s advisors on energy policy issues, has said that he presented this proposal to Trump on Dec. 5.

In the document, Cramer claims that “U.S. R&D policy is broken” and recommends giving the national laboratories more flexibility and potentially reorganizing DOE’s four applied research offices into as few as three outcome-oriented offices: Power and Grid, Transport and Fuels, and Energy Efficiency Technologies. “Reorganizing the DOE will also allow the Department to get back to basics – providing funding and program goals, instead of micromanaging national labs with mandates and overreach,” he concludes.

The ultimate shape of energy policy under the Trump administration will doubtless be forged over the course of many developments to come.