US Place in Quantum Race Probed at House Hearing

At an Oct. 24 hearing, House Science Committee members and witnesses voiced concern that the U.S. could fall behind countries that are rapidly ramping up investments in quantum R&D, with some calling for a national initiative to bolster current efforts. 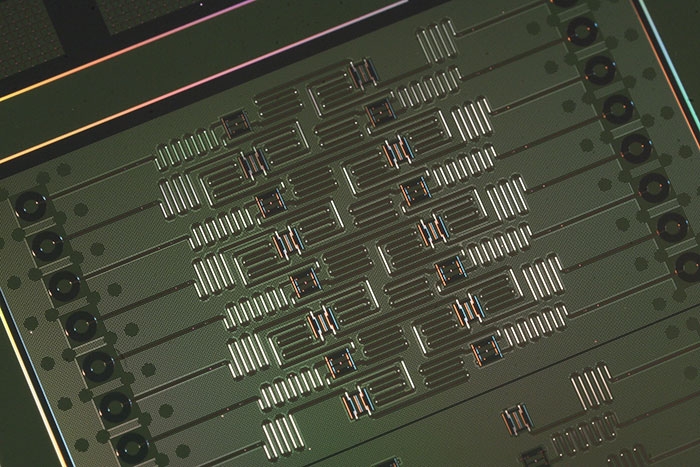 A 16 qubit processor built by IBM for use in a quantum computer.

The House Science Committee convened a hearing on Oct. 24 to examine where the U.S. stands in the “international race” to capitalize on the rapidly advancing field of quantum information science (QIS). Committee Chair Lamar Smith (R-TX) aired concerns that the U.S. could fall behind in translating fundamental knowledge into technologies, saying,

Although the U.S. retains global leadership in the theoretical physics that underpins quantum computing and related technologies, we may be slipping behind others in developing the quantum applications — programming know-how, development of national security and commercial applications.

Citing a 2015 report by the consulting firm McKinsey, Smith said that although the total unclassified U.S. investments in research on quantum technologies are estimated to be the highest in the world, other countries are not far behind. Accordingly, he argued, “We need to continue to invest in basic research. We must also take steps to ensure that we have the workforce that the future will demand.”

Rep. Dan Lipinski (D-IL), ranking member of the Research and Technology Subcommittee, expressed similar views. Observing that it had been almost two decades since the committee last focused on quantum technology, he remarked, “The state of the science and technology has come a long way since then. So has the international competition.”

He continued, “As other countries are increasing their investments in quantum technology, in some cases guided by long-term strategies, now is the time for the U.S. to start developing a more coherent strategy of our own.”

Republican committee members did not directly weigh in on whether such a national initiative is warranted, although a spokeswoman for the committee majority told FYI that there is interest in developing legislation related to the subject of the hearing.

Rep. Dana Rohrabacher (R-CA) was the only committee member to voice skepticism about the value of significantly increased federal involvement. He invoked a past episode where Congress considered pouring money into developing picture tubes, which were soon eclipsed by digital technology. “Not all the times when you spend money and you’re saying it’s for a specific end are you achieving the goal that you want to achieve,” he said.

The first of two witness panels comprised leaders from three federal agencies with large footprints in the QIS field: Carl Williams, acting director of the Physical Measurement Laboratory at the National Institute of Standards and Technology; Jim Kurose, head of the National Science Foundation’s Computer and Information Science and Engineering Directorate; and Steve Binkley, acting director of the Department of Energy Office of Science. 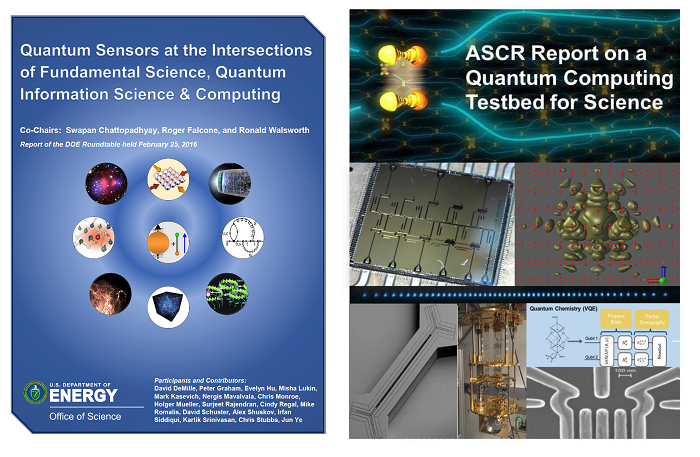 The covers of reports from two recent DOE-sponsored workshops on quantum sensors and quantum computing testbeds.

All three described their agencies’ long history of support for QIS and said the field now stands at an “inflection point,” with many companies and countries rapidly increasing their investments. They also pointed to a 2016 report by the National Science and Technology Council as a roadmap for enhancing federal support of QIS.

The report details promising applications and relevant programs, stating that federal funding of basic and applied research in QIS is “on the order of $200 million a year.” It also describes various impediments to progress, such as volatile federal funding, difficulties in training the necessary multidisciplinary workforce, intellectual property licensing challenges, and needed improvements in materials fabrication technologies.

Williams told the committee that U.S. leadership in the field increasingly relies on efforts by technology and defense companies. He also warned that other countries are in a position to capitalize on decades of U.S. investments in QIS.

Binkley added that other countries have developed long-term strategies that have already attracted top talent. In written testimony, he elaborated that researchers have taken notice of the U.S. government’s “comparative silence relative to foreign governments’ strong statements of support for quantum information science and technology.”

Binkley identified the European Union and China as having the largest QIS programs outside of the U.S., followed by the U.K. and Canada. He also noted that a number of other countries, such as Australia and the Netherlands, have made significant targeted investments.

Democratic committee members repeatedly raised the subject of how President Trump’s proposed budget cuts could harm the federal portfolio of QIS research. The agency witnesses largely sidestepped questions about potential impacts of budget cuts, although Binkley noted that the Office of Science requested a $40 million increase for QIS-related research despite the challenging budget constraints because it is such a high priority.

Binkley also made the case for sustained federal support for basic research on QIS, suggesting that the EU and U.K. governments’ more technology-centric approaches are premature.

Witnesses from the second panel made the case that the time is ripe for a concerted national effort to advance quantum R&D.

The proposal’s centerpiece is to create four Quantum Innovation Labs, which would be funded at $500 million over five years during the initiative’s first phase. The labs would host quantum “testbeds” where engineers from industry would work alongside academic researchers to gain familiarity with the relevant hardware and software. Monroe said these labs would help develop a workforce with the skills necessary to support the growth of a quantum industry.

Supratik Gruha, director of the Nanoscience and Technology Division at Argonne National Laboratory, called for greater support of basic materials research, and proposed a “National Quantum Materials Initiative” in his written testimony. “One can argue that the emergence of quantum information sciences is a direct consequence of the National Nanotechnology Initiative and a Quantum Materials Initiative could be a sequel to this,” he wrote.

The final witness — Scott Crowder, chief technology officer for quantum computing at IBM — did not explicitly call for a national initiative, but said the federal government should increase support for quantum R&D. He recommended that the DOE Office of Science significantly expand its quantum computing testbed program and that the government support both regional and topical centers of excellence focused on quantum technologies.