A draft version of the fiscal year 2018 budget outline for the National Oceanic and Atmospheric Administration proposes a 17 percent cut in funding for the weather and climate agency. NOAA research would face a 26 percent cut, while satellites and data would be cut 22 percent. 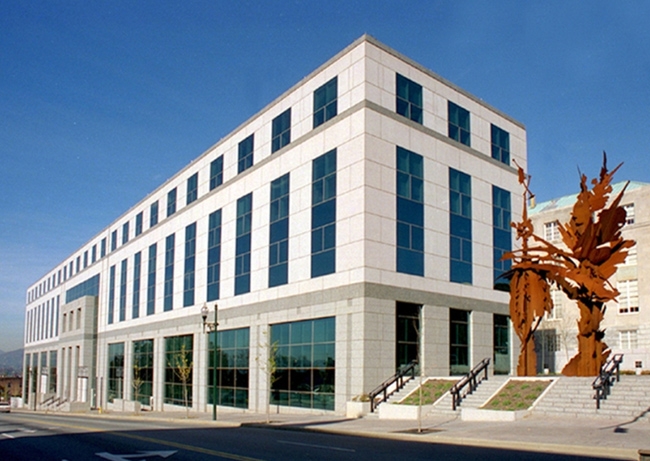 The headquarters of the National Centers for Environmental Prediction, located in Asheville, North Carolina, manages one of the nation’s leading global surface temperature datasets.

On March 3, the Washington Post reported that a four-page draft outline of the fiscal year 2018 National Oceanic and Atmospheric Administration budget that the Trump administration plans to submit to Congress next week would slash funding for the weather, climate, and oceans agency by 17 percent.

A topline funding cut at that scale would result in massive downsizing of the agency’s research and/or operations and the elimination of some programs and offices. The Post reports that the White House Office of Management and Budget has also asked the Commerce Department “to provide information about how much it would cost to lay off employees” and asked for estimates for terminating leases and government “property disposal.”

However, the draft budget could still change before the final outline is released on March 16, as the White House and NOAA remain in negotiations and nothing has yet been released publicly. Moreover, the president’s budget request is a proposal, and the Constitution stipulates that Congress - not the White House - writes the legislation that appropriates funding to NOAA and all other federal agencies.

Multiple Republican committee chairmen have already signaled that the president’s proposal to cut $54 billion, or about 10 percent, from non-defense discretionary spending in order to offset an equal increase in defense spending is unlikely to gain traction in Congress.

NOAA research, satellites, and data would bear brunt of cuts

Within NOAA, the administration’s draft budget would cut the Office of Oceanic and Atmospheric Research (OAR) - which oversees the agency’s laboratories, cooperative institutes, and extramural research - by $126 million or 26 percent. The National Environmental Satellite, Data, and Information Service (NESDIS) - which purchases and manages NOAA’s weather satellites and other observation systems - would face a $513 million or 22 percent cut.

Although the Post article does not provide many details on what would be cut within each line office, OAR and NESDIS oversee institutions, programs, and infrastructure that together are the scientific foundation for NOAA’s mission, and they are also a pillar of U.S. weather and climate research. OAR houses the Climate Program Office based in Silver Spring, Maryland; the Earth System Research Laboratory based in Boulder, Colorado; the National Severe Storms Laboratory based in Norman, Oklahoma; the Geophysical Fluid Dynamics Laboratory (GFDL) based in Princeton, New Jersey; and 16 cooperative research institutes based at universities across the nation, from the University of Alaska Fairbanks to the University of Miami. NESDIS develops and manages the nation’s primary weather and space weather observing satellites, including the multi-billion dollar Joint Polar Satellite System and Geostationary Operational Environmental Satellite system, and it operates the National Centers for Environmental Information (NCEI) headquartered in Asheville, North Carolina.

OAR and NESDIS play a key role in ongoing research on the Earth system and climate change. For example, GFDL has developed some of the scientific community’s leading global climate models, and the NCEI manages one of the few authoritative records of global surface temperature over time, the NOAA Merged Land Ocean Global Surface Temperature Analysis Dataset. NOAA provides this information to the academic research community and private sector, as well as to the public through the Climate.gov portal.

The National Weather Service, according to the Post, would face a smaller, 5 percent cut in the draft budget. The $1 billion NWS line office is the operational center of the nation’s weather forecasts issued by both the public and private sectors.

Even if the White House proposes cuts of this magnitude in its fiscal year 2018 budget request, it will need buy in from Congress to see its austerity to fruition. It is therefore notable that a number of key members of Congress are already objecting to the administration’s proposal to cut non-defense spending, which reportedly will also include a 37 percent reduction to the State Department and U.S. Agency for International Development budgets and a 25 percent reduction in the Environmental Protection Agency’s budget.

At a hearing last week, Rep. Tom Cole (R-OK), chairman of the House Labor-HHS-Education Appropriations Subcommittee, which funds the National Institutes of Health and the Department of Education, voiced his concerns:

You can’t balance the budget on the back of nondefense discretionary spending. You could eliminate it all and you’d still be running deficits of about $200 billion a year.

Moreover, Republicans including Senate Majority Leader Mitch McConnell are acknowledging they will need a significant amount of Democratic support to get appropriations legislation through the Senate, given the 60 vote threshold required to advance legislation in the chamber. And Democrats almost certainly will not support increases in defense spending at the expense of further cuts to non-defense programs. Discretionary funding has already been significantly reduced as a result of the spending caps enacted in the Budget Control Act of 2011.

President Trump's budget request will reportedly propose devastating cuts to services and investments that are critical to working families, communities, and American leadership. Enacting appropriations law - as opposed to proposing nonbinding budget resolutions - will likely require Democratic votes, just as it did in the 114th Congress when the Republican majorities were larger in both chambers of Congress.

Sen. Roy Blunt (R-MO), who chairs the Senate Labor-HHS-Education Appropriations Subcommittee appeared to concede this point in remarks made last week: “I don’t think that we’d be able to jam anything through that didn’t have some significant buy-in by Democrat appropriators and leaders.”