The National Academies released a report this week that backs the case for constructing a U.S.-based electron ion collider, a large-scale facility designed to enable new investigations in fundamental nuclear physics.

On July 23, the National Academies released a study report backing the scientific case for building a U.S.-based electron-ion collider (EIC). The study was sponsored by the Department of Energy and co-chaired by physicists Gordon Baym and Ani Aprahamian.

The study committee focused on EIC designs with high-energy, high-luminosity polarized beams that would enable new experiments on the behavior of quarks and gluons, the particles that comprise nucleons (protons and neutrons) and other members of the hadron family of particles. At a webinar marking the study’s release, Baym called the idea of building such a facility “compelling, fundamental, and timely.”

Brookhaven National Laboratory (BNL) and the Thomas Jefferson National Accelerator Facility (Jefferson Lab) have already developed preliminary plans for EICs that would take advantage of existing on-site accelerators. The study did not evaluate those proposals’ relative merits or assess the value of an EIC in view of estimated costs. 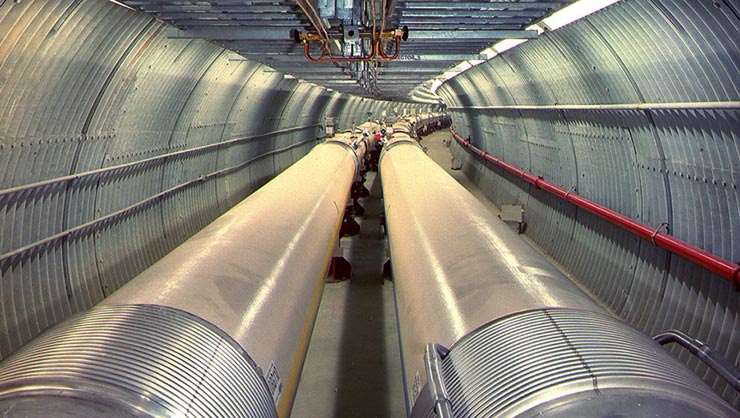 The report affirms that a new EIC could help address three major problems in quantum chromodynamics (QCD), the physics that describes quark and gluon interactions.

First, an EIC could advance understanding of the origins of nucleon mass, which cannot be explained through the Higgs mechanism that accounts for the origins of electron mass.

Second, it could advance understanding of the origin of the spin properties of nucleons, which cannot currently be reconciled with the polarization properties of their constituent quarks.

Third, it would permit new studies of the behavior of gluons, which mediate the strong force that binds quarks into nucleons and nucleons into nuclei. In particular, it could illuminate the role of gluons within nuclei and lead to the discovery of a new state of matter comprising densely packed, self-interacting gluons.

The report notes that, before it shut down in 2007, HERA was able to generate a wealth of high-energy QCD measurements that pointed to additional studies that could be performed with the proposed EIC. However, the report also observes that HERA was built to meet the needs of the high-energy particle physics community, could not collide ions, and had insufficient luminosity to explore the kinds of phenomena that could be accessed through the proposed EIC.

Other major accelerators currently in operation also have their limitations. Neither RHIC nor the Large Hadron Collider (LHC) at CERN in Switzerland were built to accelerate electrons, which prevents them from accessing the quark-scale spaces an EIC would explore with precision. CEBAF, meanwhile, does accelerate electrons into collisions with fixed targets. But, even with its recent upgrade to 12 gigaelectron volts, it cannot produce events of sufficient energy to study the phenomena that an EIC would investigate.

The BNL and Jefferson Lab proposals both aim to address the limitations of their existing facilities. At BNL, an electron accelerator would be constructed in the same tunnel as RHIC, creating a new facility referred to as eRHIC. At Jefferson Lab, a large, figure-eight-shaped collider would be built that would employ electrons accelerated by the adjacent CEBAF. Both projects would require significant R&D, which the study committee presents as an opportunity to advance accelerator science and engineering and sustain the U.S. accelerator community in the years ahead.

The study committee also observes that building an EIC presents an opportunity to keep the U.S. at the forefront of global nuclear physics as no similar facilities are currently under serious consideration elsewhere.

It notes that a preliminary proposal to append an electron accelerator to the existing LHC could not be realized until the facility concludes its currently planned experimental program in the 2030s. In addition, it reports that China also has preliminary plans to build an EIC at its Heavy-Ion Accelerator Facility, currently under construction in Huizhou, but that such a facility would not reach the energies of the proposed U.S.-based collider.

Hurdles stand between EIC proposal and go-ahead from DOE

Construction of the proposed EIC would be a major undertaking for DOE. The new report represents an intermediate step in a long process that could eventually lead to project approval.

In 2013, a National Academies overview of the field of nuclear physics identified an EIC as a potentially important investment that would have to be “carefully evaluated.” In its 2015 long-range plan, the Nuclear Science Advisory Committee (NSAC), which advises DOE and the National Science Foundation, identified an EIC as the “highest priority for new facility construction” upon completion of the Facility for Rare Isotope Beams at Michigan State University.

The new National Academies report provides further backing to the NSAC recommendation. The next step would be for DOE to formally approve the “mission need” for an EIC. Once that occurs, the department would begin working to establish an anticipated cost range for the project and to select between the BNL and Jefferson Lab proposals. Further planning and design would then precede approval to begin construction.

At the current stage of the process, timetables for future steps remain notional. Last year, for instance, BNL physicist Ferdinand Willeke presented a possible timeline in which site selection occurs in 2021 and the project is completed in 2028. However, factors such as funding availability could derail the EIC project or keep it in limbo indefinitely.

Although DOE has not yet established a cost range for an EIC project, a 2015 NSAC review of early cost estimates put the price tag for the BNL and Jefferson Lab proposals in the vicinity of $1.5 billion. NSAC’s long-range plan projects that “significant investment” in an EIC would become possible as other activities wind down, provided DOE’s Nuclear Physics program budget grows at a “modest” rate. 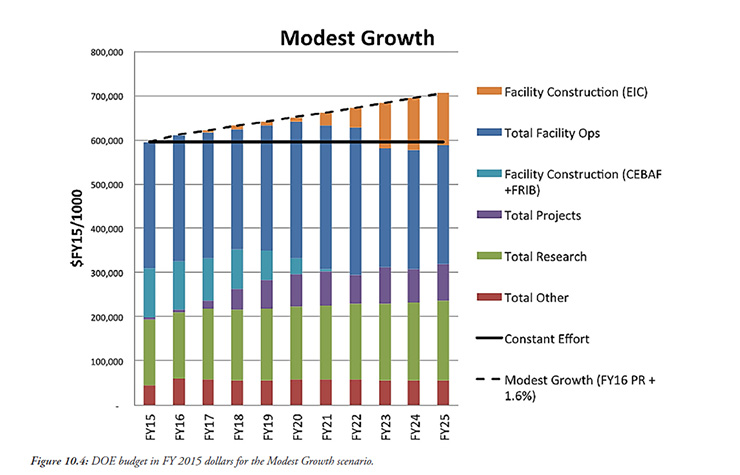 In 2015, the Nuclear Science Advisory Committee projected that, with modest increases in DOE’s Nuclear Physics budget, work on EIC could ramp up in the 2020s as construction of the Facility for Rare Isotope Beams ramps down and the Relativistic Heavy Ion Collider at BNL completes its experimental program.

Having recently raised caps on the federal budget, Congress is currently making significant increases in the DOE Office of Science budget. Consequently, funding for Nuclear Physics is rising faster than the scenario the long-range plan envisioned. For fiscal year 2019, the House and Senate are both proposing budgets of about $700 million.

However, there is no guarantee that Congress will continue to provide this level of funding. Moreover, much of the funding influx to the Office of Science is being used to kickstart major construction projects in other program offices. During the 2020s, under a limited budget, continued work on light sources, neutron sources, the $1.5 billion LBNF/DUNE neutrino experiment, and exascale computers could take priority over starting work on an EIC.