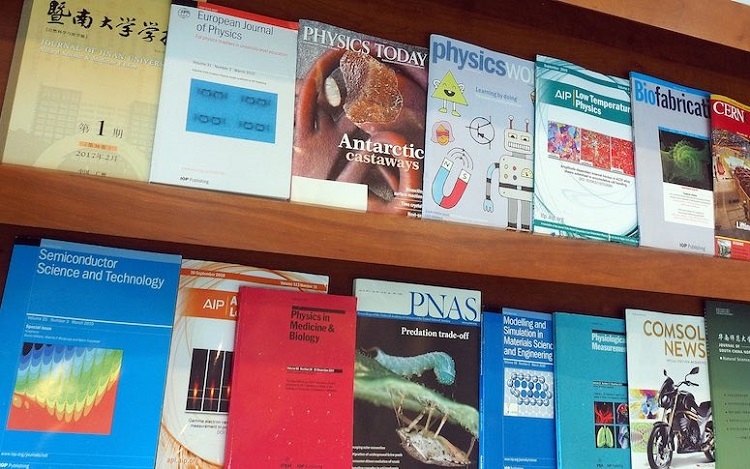 This article was first published in the Politics and Policy section of Physics Today. The following is an excerpt.

Publishers of scientific journals are facing renewed threats to their business models from both sides of the Atlantic. As European science funders promote a radical new open-access (OA) publishing mandate they unveiled last month, the Trump administration is considering changes to a five-year-old directive governing the public release of research literature sponsored by federal agencies.

A delegation led by Robert-Jan Smits, the European Commission’s special envoy on OA, visited last week with officials of the White House Office of Science and Technology Policy and other federal agencies as part of an effort to gain broad support for the new European policy, known as Plan S. Due to take effect in January 2020, the initiative would require recipients of research grants from a dozen European national funding agencies to publish their research solely in journals whose contents are immediately available for free. It would prohibit researchers funded by those agencies from publishing their findings in most high-prestige journals, including Nature and Science, which are subscription based and make papers from those agencies available for free only after a one-year delay.

Plan S has been endorsed by both the European commissioner for research, science, and innovation and the European Research Council, which administers the European Union’s research program. Officials say it will apply to the EU’s next $100 billion, seven-year research “framework” plan, which is to take effect in 2021. “For the last 20 years, libraries, universities, and [others] had the possibility to sort this out. But they did not,” Smits says. “Now the funders have stepped in, and they now call the shots.”

Smits said at a Oct. 3 briefing in Washington, D.C., that the Plan S coalition hopes to expand its model globally, though it was too early to expect any commitment from the U.S. “The publishers tell us that we can only flip our journals [to an OA model] if this happens at the global level,” he said. Plan organizers have received invitations to visit with officials of South Africa, India, China, and Japan.

Meanwhile, publishers and OA advocates have rushed to meet with OSTP staff in recent weeks upon learning the agency might change its OA policy for U.S. publicly funded research, which for now requires that such literature emerge from behind paywalls after an embargo period of up to one year. An OSTP spokesperson would not comment on the discussions. But some publishers who met with staff at the agency fear that officials may be eying shortening or eliminating the embargo and capping the fees, known as article processing charges, that publishers charge authors for their papers to be OA. Caps on these charges are also a feature of Plan S, although its framers have not yet established specific levels.

The developments in Europe and the U.S. come as scholarly journal publishers gradually shift toward a substantial but incomplete embrace of OA. The immense impact of funding agencies adopting a Plan S–like approach would extend not only to publishers but also to academic institutions and individual researchers.

Since 2013, when then presidential science adviser John Holdren instituted the one-year maximum embargo before research was made freely available, agencies have taken various paths to OA. The Department of Energy, Department of Defense, and National Science Foundation, which collectively account for nearly three-quarters of all federally sponsored non-biomedical research articles, enlisted CHORUS, a database established by commercial and nonprofit scientific publishers. NASA, the National Institute of Standards and Technology, and Environmental Protection Agency contracted with the National Institutes of Health’s long-standing PubMed Central public repository to house their sponsored research articles. In 2008 NIH had established an OA policy that required public release after one year.

Society members attending meetings at OSTP varied as to whether they thought major revisions in OA policy were in the works. These attendees, most of whom would speak only on condition of anonymity, say interpretations depend on which staff member they consulted. “Different staff have different opinions about what should go into the policy,” says one source. Most sources believe there will be some revisions.

Publishers are most concerned that cutting back or eliminating the embargo period on OA would greatly reduce incentives for universities and other institutions to pay for their journals. “Twelve months is a natural time period that librarians consider for subscriptions,” says Fred Dylla, former CEO of AIP. The concern for embargoes is particularly great for niche journals and those that are published only quarterly, he says.

Some publishers perceive OSTP to be gathering information on whether and how well the existing policy is working. “It didn’t seem like they were just going to throw it all out and start over again,” says Joel Parriott, deputy executive officer of the American Astronomical Society. “They were looking to see if there were certain areas that could use further attention.”

Heather Joseph, executive director of the open-access advocacy organization Scholarly Publishing and Academic Resources Coalition, says the OSTP staff seemed to be interested in ensuring agencies were complying with the policy. “My read is their major questions are ‘Is this an effective policy?’ and ‘Is it good enough?’” she says.

Several sources say the OSTP review appears motivated by an overarching Trump administration drive to change whatever policies were set during President Obama’s tenure. In this case, says one, the staff appeared to focus on whether the process their predecessors had followed was flawed.

Proposed changes, if any, will likely have to be approved by Kelvin Droegemeier, whose nomination as OSTP director awaits confirmation by the Senate. His views on OA are unknown.