The U.S. Geological Survey’s budget would drop by 21 percent to $860 million under the Trump administration’s proposal for fiscal year 2019. All topline research accounts would receive double-digit percentage cuts, although overall funding for energy and mineral resources programs would increase.

The Trump administration’s fiscal year 2019 budget request for the U.S. Geological Survey proposes to cut the agency’s budget from its fiscal year 2017 enacted level of $1.1 billion to $860 million, a 21 percent decrease. All USGS mission areas supporting research and investigations would see double-digit percentage cuts. However, funding for the Energy and Mineral Resources programs would be spared from cuts while the Environmental Health program is zeroed out. 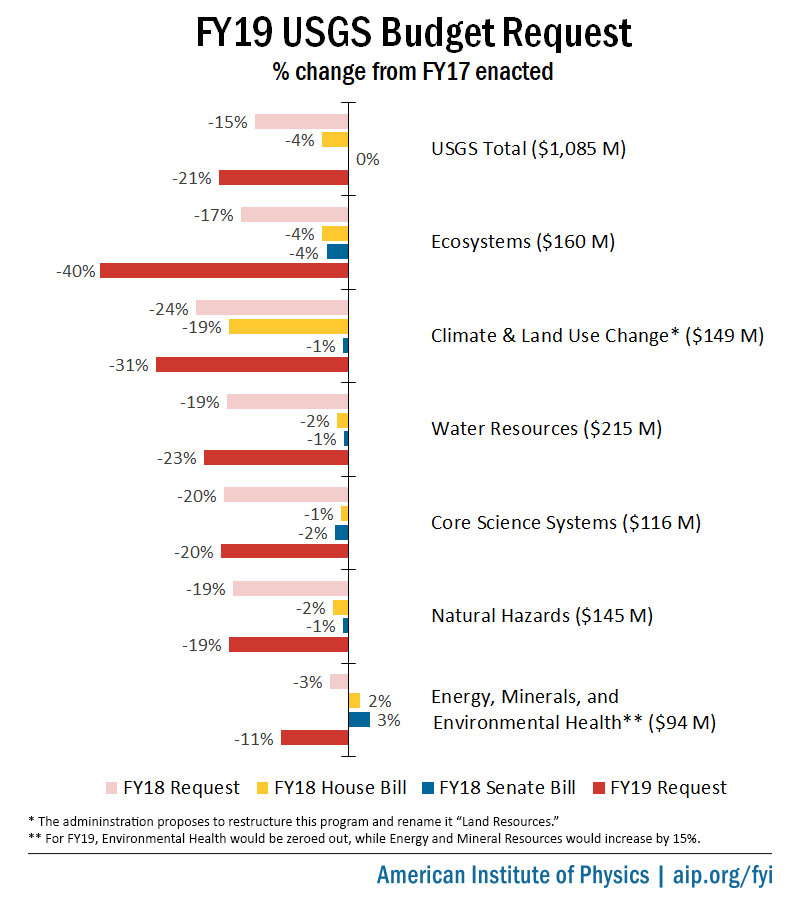 In response to the executive order issued by President Trump on reorganizing the federal government, the request includes a proposed realignment of USGS’s operational structure. In efforts to “streamline the chain of command” for the agency’s science centers, five field-based assistant director positions would be established from former regional director positions to support associate directors in the Energy and Minerals, Ecosystems, Natural Hazards, and Water mission areas. The proposed reorganization would not relocate any new employees and would “reduce the number of positions in [USGS] through attrition and voluntary placements.”

Proposed reductions and program eliminations across the mission areas echo the ones requested in fiscal year 2018, including cuts targeting natural hazards prediction and monitoring and geophysical observations. The administration again proposes to restructure the Climate and Land Use Change mission area into a new Land Resources mission area. As part of the restructuring, climate research and monitoring programs — including climate R&D and the Climate Science Centers — would be significantly cut as the agency “prioritizes funding for critical responsibilities and core mission activities.”

Last year, congressional appropriators rejected the administration’s proposed 15 percent cut to USGS’s budget in fiscal year 2018, and it is unlikely they will accede to an even greater cut in fiscal year 2019. In addition, Congress reached a budget agreement that raises nondefense spending caps by a total of $131 billion in fiscal years 2018 and 2019, and USGS may benefit from the additional spending under the new caps.

The administration proposes a $46 million, or 31 percent, decrease to the $149 million Land Resources mission area, 7 percent larger than the cut in last year’s request.

Satellite development and operations. The administration continues to prioritize the USGS-NASA Landsat program, which is scheduled to launch its latest land use observation satellite, Landsat 9, in fall 2020. The request proposes $32 million for the USGS side of the program, which includes a requested $14 million increase for ground systems development.

Climate Science Centers. The administration again seeks to cut funding almost in half for the nine Climate Science Centers, which would require six to close. The centers conduct research on the regional impacts of climate change. Support within the centers focused on the Arctic and tribal climate adaptation science would also be reduced.

Climate R&D. The administration would cut funding for climate R&D in the $38 million Land Change Science Program by $9.8 million. The program conducts scientific research on the impacts of climate, including on water resources, sea level rise, Arctic ecosystems, and land use change.

National land imaging research.  Support for research and investigations in the $86 million National Land Imaging program would decrease by $5.3 million.

The administration seeks to decrease funding for the Energy, Minerals, and Environmental Health mission area by 11 percent to $84 million. The cut is 8 percent larger than the one in its last request due to the elimination of the Environmental Health program.  Meanwhile, the Energy and Mineral Resources programs would increase by 15 percent.

Critical minerals. An $11 million increase is slated for the Critical Minerals program to develop a new Three Dimensional mapping and Economic Empowerment Program (3DEEP), which would aim to improve existing geophysical, geological, and topographic mapping to gain a better understanding of mineral resource potential. 3DEEP would focus on areas in Alaska, the middle of the North American continent, and the western U.S. that have existing topographic or elevation coverage and high mineral potential.

The proposed program comes in response to an executive order that President Trump issued in December to reduce U.S. “vulnerability to disruptions in the supply of critical minerals” imported from other nations. In accordance with the order, as well as a subsequent secretarial order issued by Interior Secretary Ryan Zinke, USGS has released a draft list of 35 minerals and mineral material groups identified as critical to the U.S. economy and national security. After a public comment period, the final list will be used to inform 3DEEP efforts as well as private sector critical mineral exploration efforts.

Energy research and assessments. The administration is requesting a $1.6 million increase to complete “a national assessment of recoverable oil and associated CO2 storage that is expected in future CO2-ehnanced oil recovery operations.” Funding would also be used to conduct research related to CO2 storage.

The administration again seeks to decrease funding for the $145 million Natural Hazards and $116 Core Science Systems mission areas by 19 percent and 20 percent, respectively. Many of the program cuts echo those included in last year’s request.

Hazard assessments. Support for hazard and risk assessments conducted in areas with low-to-moderate seismic risk would be reduced by $500,000, while funding for volcano hazard assessments would decrease by $1.5 million.

Monitoring instrument upgrades. The administration again requests a $1 million decrease for ongoing efforts focused on the repair and upgrading of outdated monitoring instruments for high-threat volcanoes. Instead, USGS would “opportunistically” upgrade six to eight instruments in Alaska in fiscal year 2019. The administration again proposes to cut $1 million for work on next-generation lahar detection systems.

Regional earthquake monitoring. A $1.8 million cut is requested within the $64 million Earthquake Hazards program for regional seismic networks, a system of 15 networks that participate in the Advanced National Seismic System to monitor and report on national earthquake activity.

3D Elevation Program. The administration is requesting a $10 million cut to the 3D Elevation Program, with a $7.3 million decrease for data acquisition and a $2.8 million decrease for technical support. The program acquires light detection and ranging (LIDAR) and interferometic synthetic aperture (IfSAR) mapping data that can be used to assess disaster reduction, infrastructure resiliency, and land use planning.