A new National Academies report reviews challenges to building a practical quantum computer and states it is difficult to project when, if ever, such a device will be realized. However, it urges actions be taken now to pave the way for future advances and prepare for their consequences. 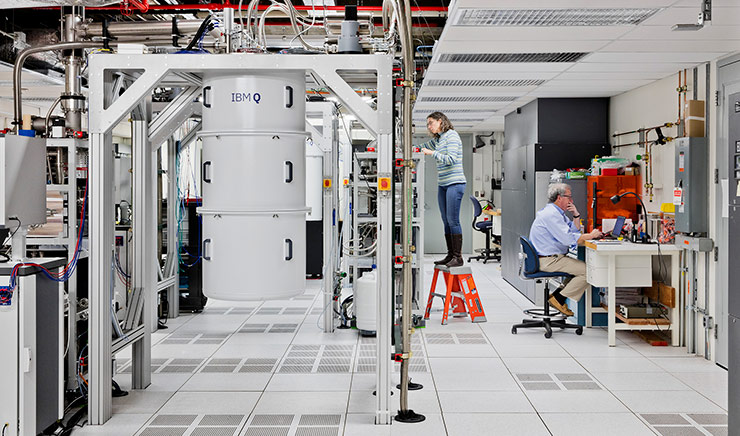 The National Academies released a report on Dec. 4 on the “progress and prospects” of the field of quantum computing. The study was sponsored by the Office of the Director of National Intelligence and produced by a committee chaired by Mark Horowitz, a professor of electrical engineering and computer science at Stanford University. The committee had no access to classified or proprietary information.

The report arrives at the end of a year in which policymakers’ interest in quantum information science (QIS) has surged. Several federal agencies have begun to focus funding on QIS research, and the National Science and Technology Council has released a general strategy to guide federal investments. Meanwhile, lawmakers, convinced of the strategic importance of QIS-based technologies, have quickly advanced legislation in both the House and Senate to establish a National Quantum Initiative. If Congress does not pass the legislation before the end of the year, it is likely to be an early priority for the 116th Congress, which convenes Jan. 3.

While policy is moving quickly, the report makes clear that practical quantum computers are a prospect for the distant future, if they are ever built at all. Nevertheless, it stresses that successful quantum computing could have profound implications for fields such as cryptography and that it is important to lay groundwork now to enable and prepare for future technological advances.

The report observes that current quantum computers are proofs of concept that fall far short of being able to perform useful computational tasks. Addressing whether it is possible to build a practical quantum computer, the report finds,

While a few researchers have argued that practical quantum computing is fundamentally impossible, the committee did not find any fundamental reason that such a system could not be built — provided the current understanding of quantum physics is accurate.

One challenge confronting quantum computation is coping with the physical “noise” in their operations. While such noise is suppressed by the binary logic of traditional computers, it distorts the indeterminate quantum states on which quantum computers rely, making them inherently error-prone. These errors can be reduced through engineering and they can also be compensated for using “quantum error correction” (QEC) algorithms, which require additional quantum computational capacity to execute.

The report projects that, to exploit the potential of quantum computers to perform certain kinds of calculations far faster than traditional computers, a machine would be required that has an average qubit error rate that is a factor of between 10 and 100 less than that found in today’s largest prototypes. Qubits are the fundamental unit of information in quantum computers. Current record-holding machines employ less than 100 qubits, and the report estimates that practical computers would need to increase that number by at least five orders of magnitude to perform their calculations and correct for errors.

Beyond the difficulties involved in constructing a functioning computer, the report points to other challenges associated with operating one. It states that, because the architecture of quantum computers is very different from that of traditional computers, achieving “quantum speedup” requires“very clever” algorithm design. The report points out that quantum computers will also require new software stacks and notes that, because quantum systems cannot be queried at an intermediate step, such software will require new debugging methods.

Given the challenges facing quantum computing, the report declines to predict when a practical computer might be developed and leaves open the possibility it may never happen.

Policies urged to enable, and prepare for, future advances

Although the report finds that practical quantum computing remains far in the future, it suggests policies can be implemented in the near term to pave the way forward.

The report observes that quantum computers’ capabilities do not fully overlap with those of traditional computers and that they have certain liabilities such as inefficiency in loading large datasets. Therefore, they will be “special-purpose devices” that will run in complement with traditional computers, “analogous to a co-processor or an accelerator.” The report suggests their unique features should be taken into account in finding ways to advance them.

In setting milestones for quantum computer development, the report notes different options are available. Teams could work to demonstrate “quantum supremacy” by successfully completing tasks that are intractable with traditional computers, or they could try to create a “commercially useful” quantum computer that carries out a practical task more efficiently than a traditional computer can. They could also work to achieve other goals such as reducing error rates. The report generally suggests that different teams adopt common reporting conventions to enable better comparisons between machines.

The report stresses that continual progress in traditional computing has been possible because of a “virtuous cycle,” in which technical advances often lead to commercially profitable products. However, it observes that early quantum computers are unlikely to have commercially useful applications, which may necessitate ongoing government R&D support, especially if private-sector funding collapses. Accordingly, the report also stresses the importance of trying to create a virtuous cycle. Noting that early machines will likely be “noisy intermediate-scale quantum” (NISQ) computers incapable of running QEC algorithms, it suggests applications for such machines be developed “by the early 2020s.”

Among long-term applications of quantum computers, the report concentrates on their ability to render current cryptography obsolete by rapidly factoring the large integers on which it is based. The report states it is “highly unexpected” that current cryptosystems will be defeated “within the next decade.” However, finding that the hazards are large and countermeasures require large lead times, it argues that “prioritization of the development, standardization, and deployment of post-quantum cryptography is critical for minimizing the chance of a potential security and privacy disaster.”

Beyond any progress R&D makes toward realizing practical quantum computers, the report anticipates such efforts will yield substantial benefits for other areas of science and technology as well.

Because work toward a quantum computer will entail R&D on general methods for controlling and measuring quantum systems, the report states results will also “spill over” to other, more near-term QIS-based technologies, including precision clocks, magnetometers, and inertial sensors. It also points out that quantum computers would employ quantum communication, which it notes is a “vibrant” field of R&D in its own right.

The report further observes that R&D on quantum computers often involves work on “foundational” problems in physical science, and that work on quantum algorithms advances fundamental theories of computation. While the report notes that research on such problems could result in practical applications in other technology areas, it also extols such work as an inherent good, stating,

Regardless of when — or whether – a large, error-corrected quantum computer is built, continued R&D in quantum computing and quantum technologies will expand the boundaries of humanity’s scientific knowledge, and the results yet to be gleaned could transform our understanding of the universe.