US Quantum R&D Strategy Unfolding Across the Government

At a Sept. 24 summit, the White House released an initial national strategy for advancing quantum information science, while the Department of Energy and National Science Foundation awarded $249 million in QIS grants. A Senate hearing the next day considered DOE’s role in a National Quantum Initiative.

Excitement around quantum R&D jumped to a new level this week in Washington, D.C., with events on both ends of Pennsylvania Avenue illuminating America’s emerging national strategy for quantum information science (QIS).

On Sept. 24, the White House Office of Science and Technology Policy convened a summit with leaders from federal agencies, academia, and industry to discuss how to accelerate progress in QIS and the development of QIS-based technologies. Coincident with the summit, the Trump administration released a National Strategic Overview for Quantum Information Science that outlines its plan for advancing the field. The Department of Energy and National Science Foundation also announced grant awards totaling $218 million and $31 million, respectively.

Meanwhile, a Senate Energy and Natural Resources Committee hearing held the next day reviewed DOE’s role in QIS and made clear that the legislative push to launch a National Quantum Initiative is continuing to gain momentum. 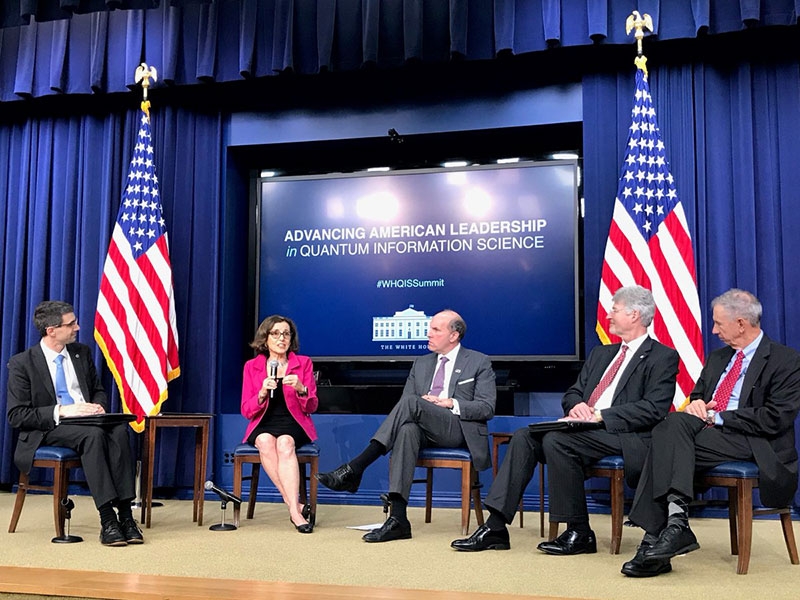 Produced by the National Science and Technology Council (NSTC), an interagency coordination body, the National Strategic Overview for QIS identifies a set of “policy opportunities” that the federal government will address through agency-level plans that are due early next year. These plans will inform the development of an overarching strategic plan.

Many of the opportunities and challenges detailed in the report are similar to those identified in a 2016 NSTC report on QIS, but the latest iteration breaks new ground by outlining an approach structured around multidisciplinary research centers that focus on “Grand Challenges” in specific subfields. The report argues such an approach is prudent because it is too early to predict what QIS-enabled technologies will materialize:

Even now, while prototype QIS applications, platforms and devices are becoming commercially available, new applications and platforms will likely come from protocols and approaches that are not yet invented. Thus, the Government should maintain robust and diverse platforms and research thrusts that continue to stimulate transformative and fundamental scientific discoveries by taking an approach that puts the science first.

Accordingly, the report continues, the “pursuit of scientific and applied Grand Challenges will be the unifying strategy.” Agencies will identify challenges in specific sub-fields such as quantum sensing, networking, and computing in their forthcoming plans. The report also anticipates solutions to such challenges will require investments in multidisciplinary teams of researchers and technologists over a period of at least ten years.

It also calls for the creation of a U.S. Quantum Consortium that would assess workforce, infrastructure, and technology needs. For instance, one focus would be to help ensure there is an adequate supply of “quantum-essential supporting technologies that are not intrinsically quantum in themselves,” such as cryogenics, low-noise microwave amplifiers, and nanofabrication devices.

The report also stresses the need for a “quantum-smart” workforce that possesses a combination of physics, computational, and engineering expertise. It identifies fundamental research as the “main mechanism” for fostering this workforce, but also states that the current U.S. educational system “rarely” provides graduates with the cross-disciplinary experience needed to solve QIS challenges.

Accordingly, academic institutions will be encouraged to take actions that ensure students are exposed to a “diverse yet convergent set of disciplines,” such as formalizing quantum engineering as a disciplinary track and establishing training programs with industry.

Beyond strengthening the domestic workforce, the report states the U.S. should increase cooperation with “like-minded” nations and “prioritize strategic bilateral partnerships” to access international talent and capabilities. Promoting open access to QIS research data when appropriate and advancing international standards that aid the adoption of new technologies are identified as further priority areas.

The report also acknowledges that the economic benefits of new QIS-based technologies must be weighed against the national security risks such advances could generate. Given the dual-use nature of some quantum technologies, federal agencies will both “ensure consistent application of existing classification and export control mechanisms” and strive to provide the “largest amount of information possible” related to QIS research to universities and industry.

The Senate hearing on Sept. 25 offered a window into how the “National Quantum Initiative Act” is also shaping agency activities despite still being under development. The Senate version of the bill does not yet contain DOE provisions, as it originated in a separate committee that lacks jurisdiction over the department. However, Committee Chair Lisa Murkowski (R-AK) said she is “proud” to be working on the bill, an indication that her committee plans to contribute DOE-related provisions to it.

DOE Under Secretary for Science Paul Dabbar noted that even though the bill has not yet been enacted, it has already stimulated conversations among national labs, universities, and industry about what form the research centers envisioned by the legislation should take.

Dabbar explicitly endorsed a provision in the House bill that directs DOE to create up to five QIS-focused R&D centers. He said that while it is important to continue supporting smaller-scale QIS research efforts, “establishing three to five national quantum centers would anchor the national program to ensure discoveries would rapidly translate from technological advances.”

Dabbar said DOE is working on a plan to spend $120 million on QIS in fiscal year 2019, nearly double the amount it spent in fiscal year 2018. In written testimony, he also detailed how the DOE Office of Science distributed the $218 million in multiyear QIS awards announced at the White House summit across three program offices.

Of the total, the Office of Advanced Scientific Computing Research is awarding $81 million to develop computing hardware and software, including two new quantum computing testbeds at Lawrence Berkeley National Laboratory and Sandia National Laboratories that will operate similarly to DOE’s other national user facilities. Of the remaining amount, the Offices of Basic Energy Sciences and High Energy Physics are awarding $106 million and $31 million, respectively, to advance R&D on a wide range of topics, from quantum materials synthesis techniques to quantum-based sensors capable of detecting dark matter particles.