Last week, the House Science Committee advanced bipartisan legislation that would launch a 10-year National Quantum Initiative to increase coordination and funding of quantum R&D supported by the Department of Energy, National Science Foundation, and National Institute of Standards and Technology. Meanwhile, in the Senate, leaders of the Commerce Committee have introduced a companion bill, and the Armed Services Committee is seeking to establish a separate quantum R&D program for the defense agencies. 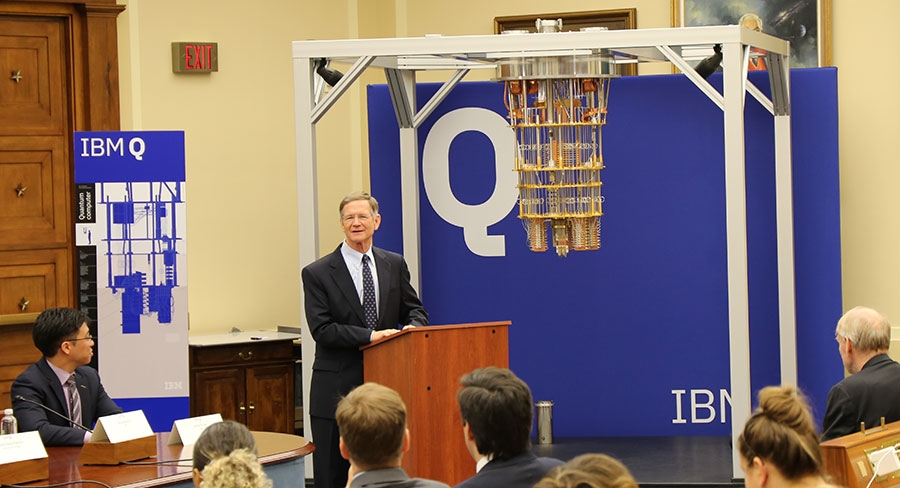 To mark the introduction of the “National Quantum Initiative Act,” House Science Committee Chair Lamar Smith (R-TX) invited IBM to showcase a prototype of its 50-qubit quantum computer in the committee’s hearing room.

Smith indicated he is optimistic the bill could become law this year, noting that the top Republican and Democrat on the Senate Commerce, Science, and Transportation Committee — Sens. John Thune (R-SD) and Bill Nelson (D-FL) — have introduced companion legislation. However, it does not include the DOE section from the House bill because the committee does not have jurisdiction over the department. Those provisions will have to be routed through the Senate Energy and Natural Resources Committee.

The leaders of both science committees pointed to international competition, particularly by China, as a key motivator for launching a concerted national effort to spur QIS. In his opening statement, Smith remarked,

China and the European Union are investing billions of dollars in new research facilities and equipment for quantum computing. China, in particular, has stated publicly its national goal of surpassing the U.S. during the next decade. … Winning this scientific race requires a new moonshot for the 21st century.

Johnson struck a similar tone in her statement, although she did not name particular countries:

Not unlike the space race of the 1960s, the stakes in today’s quantum race are high. Global leadership in quantum computing brings with it a military and intelligence edge as well as a competitive advantage in what many expect to be a massive industry for decades to come.

The NSF centers would be run by “institutions of higher education or eligible nonprofit organizations,” while the DOE centers would be run by “national laboratories, institutions of higher education, research centers, multi-institutional collaborations, and other appropriate entities.” For both types of centers, the bill indicates that private sector entities can receive funding if they are participating in a collaboration with eligible institutions. As for NIST, the bill directs it to allocate $80 million annually to expand its footprint in QIS R&D and continue to develop the measurement science and standards infrastructure necessary to support the emerging commercial market for new quantum-based technologies.

Notably, the bill stipulates that each agency “shall” expend the sums on these activities. Describing the overall effect the bill would have, Smith said, “$225 million a year of these agencies’ baseline funding will now be directed to new quantum research centers and laboratory research.”

While expressing strong support for the quantum bill, Rep. Bill Foster (D-IL) raised concerns that it could divert resources from other programs.

“The decision to legislate new activities without new funding would inevitably mean that other valuable research in these agencies would suffer,” he remarked, offering an amendment to strike language from the bill stipulating that “no additional funds are authorized to be appropriated to carry out this act.” Foster later withdrew the amendment as a courtesy to Smith, who opposed it.

Smith explained that “under House rules we can’t increase the funding right now, but let me reassure you that I do support an increase in funding and will look for ways to try to achieve that.”

Among the primary backers of the bill is the National Photonics Initiative (NPI), a coalition of scientific societies, universities, and industry groups seeking to increase federal funding in photonics-driven fields they view as critical to U.S. competitiveness and national security. Its founding sponsors are the Optical Society, an AIP Member Society, and SPIE — both international professional societies for optics and photonics researchers.

In a June 22 letter to the committee, NPI expressed strong support for the bill and called for the addition of a “Quantum Computing Access Program,” as outlined in their National Quantum Initiative Action Plan issued in April. Along these lines, Rep. Randy Hultgren (R-IL) offered a successful amendment that directs the National Quantum Coordination Office to promote external user access to quantum computing and communications systems.

Another major stakeholder for the bill is the American Physical Society (APS), a professional organization of over 50,000 physicists that is also an AIP Member Society. The society’s Office of Government Affairs told FYI that APS is “supportive of the research principles of the bill,” but also is “concerned with the comments made by Chairman Smith during last week's hearing that funding for the National Quantum Initiative would be drawn from the agencies' baseline funding and the potential impact this could have on other research programs.”

A spokesperson for the committee majority told FYI that the bill was crafted to adhere to House Republican rules that require newly authorized programs to draw funding from current resources or through offsets to other programs. However, the spokesperson assured that “the committee will work through the process to ensure that the new initiative does not take away from important core research.”

Congressional appropriators have advanced spending legislation for fiscal year 2019 that would provide the DOE Office of Science and NSF with substantial topline increases, giving the agencies room to support expanded QIS efforts. However, NIST’s overall research program is currently slated to be flat funded.

Other research and industry coalitions have also weighed in. The Computing Research Association wrote to the committee in support of the initiative, but also articulated concerns that the bill’s definition of QIS lacks a “sufficient focus on the computational aspects of the discipline.”

The Quantum Industry Coalition, a newly formed lobbying group comprised of companies engaged in quantum technology development, likewise endorsed the initiative but also hopes to modify the bill as it advances. The coalition’s executive director told FYI that it would like to add references to applied research in several sections and bolster the bill’s workforce development provisions by "expanding the number and distance-learning capabilities" of the NSF centers.

Separate efforts are underway to improve the coordination and focus of the Department of Defense’s QIS R&D portfolio, over which the science committees do not have jurisdiction.

Most notably, the Senate version of the “National Defense Authorization Act (NDAA) for Fiscal Year 2019,” which it passed on June 18, contains a provision that would direct the under secretary of defense for research and engineering to establish a program to coordinate all QIS R&D supported by DOD. It also authorizes a $20 million funding increase for QIS across DOD and directs the Defense Intelligence Agency to prepare a report comparing the capabilities of the U.S. and adversary nations in emerging technology areas, including QIS.

The report accompanying the Senate NDAA acknowledges that DOD has made longstanding investments in QIS, but explains that the committee seeks to provide an overarching strategic framework for these activities. The report also highlights how the bill directs DOD to “continuously update guidance … and policies for control of personnel participating on such activities to minimize the effects of loss of intellectual property in basic and applied quantum science and information considered sensitive to the leadership of the United States in the field of quantum computing.”

Separately, Sen. Kamala Harris (D-CA) has introduced the “Quantum Computing Research Act,” which would create a “Defense Quantum Information Consortium” comprised of institutions selected by the chief of naval research and the Army Research Laboratory director.

Correction: The initial version of this article stated that DOE plans to spend $45 million on QIS in fiscal year 2018. The agency requested that amount, but the final spending level enacted by Congress was $62 million. The article has also been updated to clarify that the funding authorized for DOE in the National Quantum Initiative Act is solely for establishing and supporting quantum centers.