Trump Administration Identifies R&D Priorities for Its Next Budget Request

On July 31, the White House issued its annual memorandum identifying the Trump administration’s latest R&D priorities. Written jointly by the Office of Management and Budget and the Office of Science and Technology Policy, the memo provides guidance to federal agencies as they prepare their submissions for President Trump’s fiscal year 2020 budget request, which is due for release in February.

In past administrations, the directors of OMB and OSTP have generally both signed off on the memos. As OSTP still lacks a director, the top political appointee in the office, Deputy U.S. Chief Technology Officer Michael Kratsios, has signed the Trump administration’s memos along with OMB Director Mick Mulvaney. The day after the White House released this year’s version, Trump announced meteorologist Kelvin Droegemeier as his pick for OSTP director. 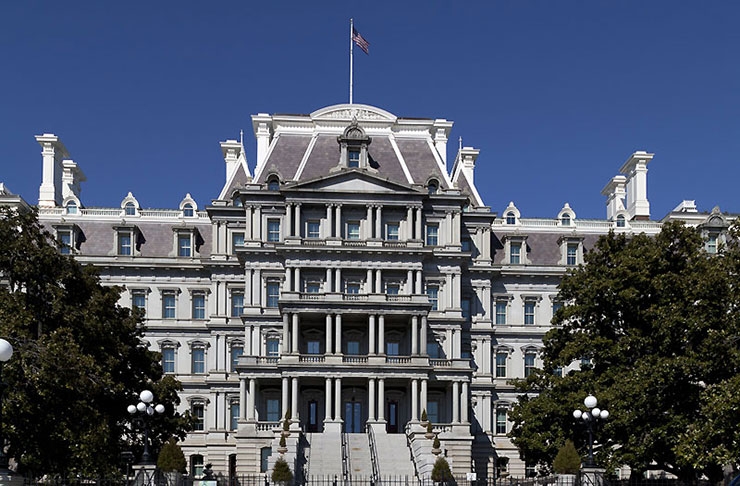 OSTP is located in the Eisenhower Executive Office Building, which is adjacent to the White House.

The section on “Energy Dominance” is largely unchanged from last year. It directs agencies to focus their efforts on “early-stage” technologies and ensure that federal energy R&D investments “continue to reflect an increased reliance on the private sector to fund later-stage research, development, and commercialization of energy technologies.” The section does include a new reference to investing in user facilities as a way of improving collaboration with industry and academia.

While last year’s memo made passing references to machine learning and quantum computing, this year’s dedicates a section to artificial intelligence (AI), quantum information science, and “strategic” computing — identifying them as “critically important” to U.S. national security and economic competitiveness. The importance of AI, machine learning, and other enabling computing technologies is also stressed elsewhere in the document. For instance, a new section on manufacturing identifies semiconductor fabrication and AI-enabled industrial robotics as key investment areas.

A new section on space exploration directs agencies to focus research investments on supporting “long-duration spaceflight, in-space manufacturing, in-situ resource utilization, long term cryogenic fuel storage and management, and advanced space-related power and propulsion capabilities.” It also identifies microgravity research as a promising field for developing new biopharmaceuticals and materials. Although the Trump administration has made space exploration a priority from the outset, last year’s memo only made a brief reference to space-related R&D.

Again absent is any reference to climate research, a departure from previous administrations. The most prominent environment-related priority is a new section on agriculture that directs agencies to focus on R&D that enables precision agriculture and aquaculture techniques. It also instructs agencies to prioritize “pre-competitive” research in gene editing technologies that have agricultural applications.

The memo also identifies five “R&D priority practices,” which range from modernizing research infrastructure to preparing the U.S. workforce for jobs of the future through STEM education.

It again emphasizes that workforce training efforts should leverage experiential learning methods such as apprenticeships and include Americans from underrepresented groups and both urban and rural areas. It also reiterates that agencies should seek to divest from obsolete facilities and use the National Science and Technology Council to coordinate cross-government initiatives.

The memo places a new focus on improving the transfer of federally funded technologies to the private sector, instructing agencies to “prioritize and highlight lab-to-market initiatives” in their budget proposals. It also directs agencies to use public-private partnerships to “align basic research with future private sector needs, establish testbeds and datasets reflective of real-world conditions, transfer techniques and technologies across sectors, and more quickly diffuse basic research results to the private sector.”

The addition reflects how the administration made improving federal technology transfer efforts an official cross-agency goal earlier this year.