The Trump administration is ramping up a cross-agency effort to review and redesign policies that govern the commercialization of federally funded technologies, with the goal of increasing the returns on taxpayer investment in R&D.

Increasing the odds that the fruits of federally funded R&D traverse the so-called “valley of death” between the lab and the market without spoiling has emerged as a top priority of the Trump administration.

Early on in his tenure, National Institute of Standards and Technology Director Walter Copan said he believes the time is ripe to conduct a comprehensive review of the practices and policies that underpin the federal technology transfer framework. Now it is clear that such an effort has the backing of the broader administration.

The administration has made improving federal technology transfer a cross-agency priority goal, designating the Commerce Department, which houses NIST, and the White House Office of Science and Technology Policy as lead agencies. As an initial step toward meeting that goal, today NIST issued a request for input (RFI) on what principles should be protected or changed as the administration works to “refocus federal technology transfer on sound business principles based on private investment.”

Between now and the July 30 comment deadline, NIST is holding four stakeholder engagement events across the U.S. as part of the initiative, called “Return on Investment.” Details about the events are included in the RFI.

To start the conversation in the run up to the RFI release, NIST convened a symposium in Washington, D.C., last month that offered initial insights into federal, academic, and private sector perspectives on the subject. 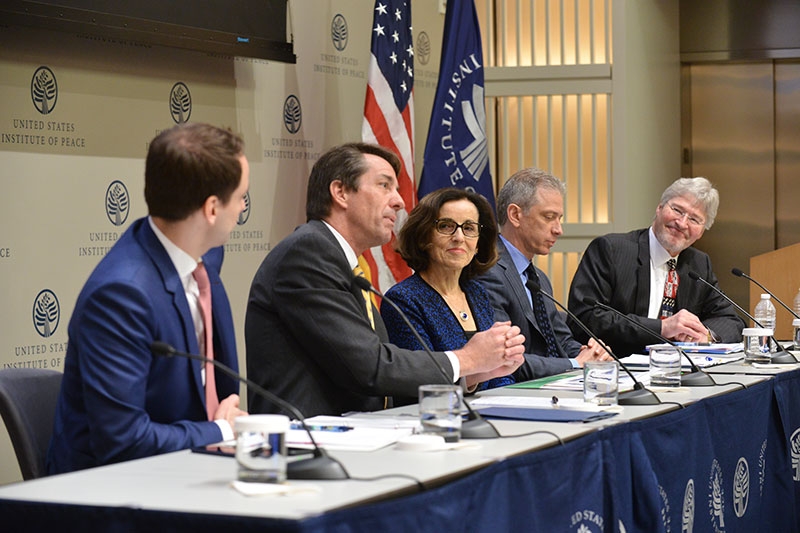 In a keynote address at the April 19 event, Commerce Secretary Wilbur Ross said that action is needed given that federal technology transfer efforts have “stagnated” and that other countries are capitalizing on U.S. R&D.

Outlining his specific concerns with the current system, Ross said that landmark technology transfer laws enacted in the 1980s — namely the Bayh-Dole Act and the Stevenson-Wydler Act — are outdated and have created unintended barriers. Ross said the laws do not fully protect intellectual property rights of companies that enter into Cooperative Research and Development Agreements (CRADAs) with federal agencies and make it difficult for federal researchers to become entrepreneurs.

More broadly, Ross said that over time “there has been a shift away from technology transfer as an important focus of our R&D enterprise.” Accordingly, he remarked,

To the directors of federal laboratories … I challenge you to make it clear to your legal, research, and administrative staff, that technology transfer must move as rapidly as industry does.

He concluded by calling on the academic and private sector R&D communities to share best practices with the government. Copan similarly stressed that it is time to rethink the federal approach to technology transfer.

“Key inventions, software, and facilities that industry and entrepreneurs want sadly remain unavailable to create value in the U.S. economy,” Copan remarked. “A realignment of the federal partnering models with U.S. industry and universities is long overdue to ensure that the American taxpayer is reaping the greatest benefit from our S&T investment.”

The event also featured three panel discussions with representatives from the federal, academic, and private sectors. Videos of each are available here.

The RFI includes an initial list of “systemic challenges to effective transfer of technology, knowledge, and capabilities from federal R&D.” Among them are the following:

Based on the feedback received on how to address these and other challenges, NIST says it will consider articulating best practices, promulgating regulations that ensure authorities are interpreted consistently across agencies and, “if appropriate,” seeking legislative changes.

Kratsios lauded recent federal efforts to foster entrepreneurship among scientists, citing the National Science Foundation’s Innovation Corps (I-Corps) program, Lawrence Berkeley National Laboratory’s Cyclotron Road, and Oak Ridge National Laboratory’s Innovation Crossroads. Elaborating on the partnership models initiative, he said that OSTP has established a new Committee on the S&T Enterprise and a Subcommittee on Lab-to-Market within the National Science and Technology Council, an interagency coordination body. He also highlighted how the administration has recently expanded the Army Research Laboratory’s Open Campus Initiative, which is designed to make it easier for lab researchers to engage with outside organizations.

Among the other federal panelists was NSF Director France Córdova, who focused her presentation on placing the agency’s new “Convergence Accelerators” program in context with existing programs that interface with industry. She referred to the pilot program as a “home for application-driven basic research” that will “advance ideas from concept to deliverables” and attract seed funding from industry.

She said that each accelerator will facilitate the formation of a large cohort of research teams, which will then pitch their ideas to NSF. Selected teams will receive large grants and then compete for a final prize. In its fiscal year 2019 budget request, NSF requested $60 million for the program and estimated that it can attract $40 million from external organizations, including companies and other agencies. 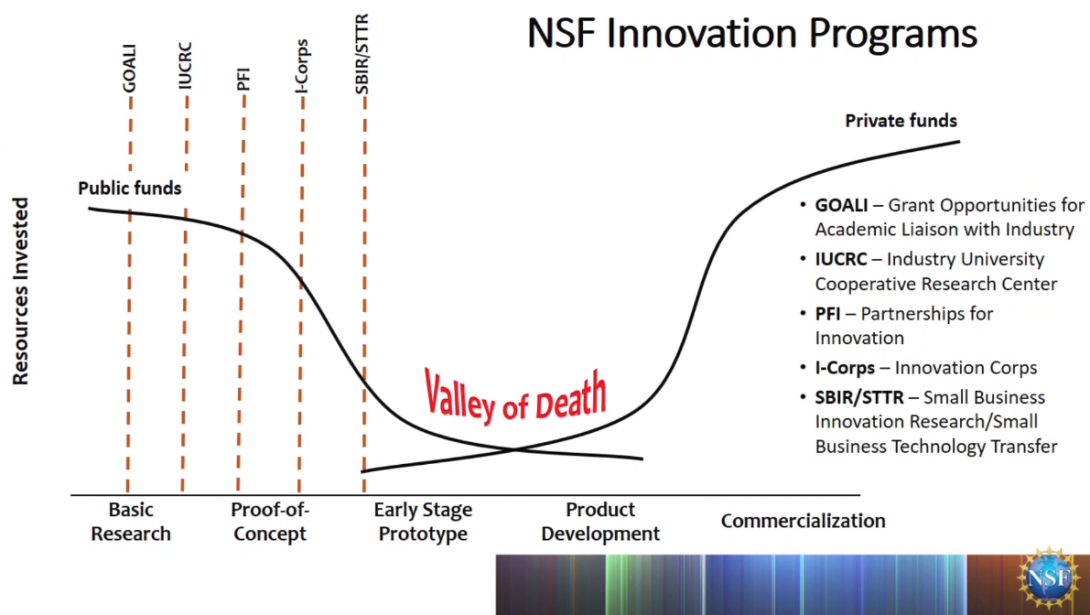 A slide from Córdova’s symposium presentation depicting NSF programs in relation to different stages of technology commercialization. Click to enlarge.

Panelists reflect on the ‘professionalization’ of tech transfer

Members of the academic and industry panels commented on how the field of technology transfer has matured since the enactment of the Bayh-Dole Act. The law ushered in a new era in the field by allowing nonprofit organizations and small businesses to retain patent rights to inventions resulting from federally funded R&D projects, subject to certain conditions. Previously, the government retained patent rights to such inventions.

Mark Kamlet, an economics professor at Carnegie Mellon University, described a 2011 National Academies study he participated in that concluded the Bayh-Dole system is “unquestionably more effective” than the previous system and does not appear to have inhibited other university missions. He also said that since the technology transfer field is now “quite professionalized,” sharing lessons learned by effective commercialization offices should be a major focus. Later adding to his remarks, Kamlet said,

In my view, Bayh-Dole [took] a system where virtually no intellectual property from university research was transferred to society to a very robust system today. The national labs still labor under the old constraints, which crippled universities. The parties involved in this symposium believe this needs to change. I agree.

Katherine Ku, director of Stanford University’s Office of Technology Licensing, also commented on the professionalization of the field, observing how her office has grown from having a few people before Bayh-Dole to having about 50 people today. Stephen Susalka, CEO of the Association of University Technology Managers, noted how the Bayh-Dole system has been emulated across the world and urged that any changes to it be made with “great caution.”

Panelists also highlighted recent initiatives to identify best practices. Peter McPherson, president of the Association of Public and Land-Grant Universities, highlighted recent recommendations made by his organization and the Association of American Universities on principles universities should follow in managing and evaluating their intellectual property portfolios. William Elkington, president of the Licensing Executives Society, said intellectual property deals are often still crafted in a “sort of mid-20th century way” and that accordingly his society is developing rigorous standards for such agreements.

Deborah Wince-Smith, CEO of the Council on Competitiveness, observed that current anxiety about technological competition with China is strikingly similar to concerns the U.S. government had about Japan in the 1980s. She recalled how that period, during which she worked in OSTP and the Commerce Department, was a time of “policy fermentation and policy innovation” that put in place structures that still exist today.

Wince-Smith said that while attention always must be paid to optimizing R&D partnerships and licensing processes, emphasis now also needs to be placed on establishing cross-sector, multidisciplinary partnerships to secure leadership in the industries of the future. She also garnered one of the biggest applauses of the day when, after recounting the perennial nature of technology transfer challenges, she remarked,

“I hope in my lifetime I will come to a meeting like this and not see the chart of the valley of death.”