US Confronting Threat of Chinese Exploitation of Intellectual Property

A chorus of concern has emerged in Congress about China’s allegedly pervasive exploitation of the U.S.’s intellectual property and open research environment, with some lawmakers seeking to overhaul foreign investment and export control systems. Meanwhile, the Trump administration is preparing a package of unilateral retaliation measures that reportedly could include visa restrictions on Chinese students and academics.

Multiple members of Congress have raised concerns in recent hearings that the Chinese government is systematically acquiring U.S. intellectual property through both legal and illegal means, ranging from investing in U.S. technology companies to carrying out intelligence collection efforts at universities. At the other end of Pennsylvania Avenue, the Trump administration is reportedly considering implementing a set of tariffs, investment restrictions, and academic visa restrictions targeted at China as retaliation for exploiting U.S. intellectual property

Committee Chair Richard Burr (R-NC) said in his opening statement that foreign investments in certain companies are “jeopardizing the nation's most sensitive technologies” and that he hoped the hearing would touch on the “counterintelligence threat to our national academic research and laboratory construct.” Committee Ranking Member Mark Warner (D-VA) said he believes China is pursuing an “all-of-society approach to gain access to our sensitive technologies and intellectual property.”

I think, in this setting, I would just say that the use of nontraditional collectors, especially in the academic setting, whether it's professors, scientists, students, we see in almost every field office that the FBI has around the country. It's not just in major cities; it's in small ones, as well. It's across basically every discipline.

And I think the level of naiveté on the part of the academic sector about this creates its own issues. They're exploiting the very open research and development environment that we have, which we all revere. But they're taking advantage of it. So one of the things we're trying to do is view the China threat — it's not just a whole-of-government threat, but a whole-of-society threat on their end, and I think it's going to take a whole-of-society response by us.

Wray then said the intelligence community has been working to raise awareness of the issue within academia and the private sector. 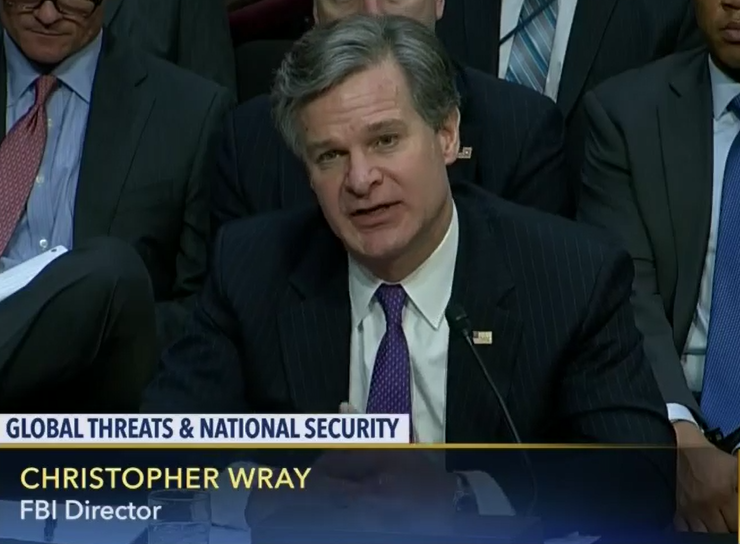 FBI Director Christopher Wray told the Senate Intelligence Committee that he believes academia is naïve about the scale of China’s counterintelligence campaign.

The FBI has increased its focus on countering such counterintelligence in recent years, although the efforts have attracted scrutiny for ensnaring some apparently innocent individuals, such as Xioaxing Xi, a physics professor at Temple University.

There is no doubt that we must take espionage threats from foreign countries seriously. However, Senator Rubio’s leading question and FBI Director Wray’s sweepingly broad response were completely irresponsible generalizations that attempt to paint all Chinese students and scholars as spies for China. … Unfortunately, the growing perception that simply being of Asian ancestry or having ties to China makes you prone to espionage has created a culture of fear that has negatively impacted the Asian American community.

We need to look no further than the examples of Sherry Chen and Dr. Xioaxing Xi, two Chinese American scientists who were wrongfully accused of espionage by the FBI only to have their charges dropped with no explanation. This caused irreparable harm to their careers, reputations, and lives, and many Asian American students, scientists, and scholars now fear that they may be subjected to the same discrimination.

He then asked Maria Zuber, the chair of the National Science Foundation's governing board, whether she shares these concerns. Zuber, who is also vice president for research at MIT, said the U.S. needs to raise awareness about these issues while continuing to attract and retain Chinese students:

There certainly is some legitimacy to those concerns. Certainly, the U.S. needs to interact with China. They’re a global power. There are things that it makes sense for us to collaborate on. It makes sense for us to attract talented Chinese students. We ought to work hard at keeping the best people in the U.S. after they get their degrees. But we need to do a much better job in terms of training those students and actually our professors about issues of intellectual property so that we can respect the inventions and achievements of our people in the universities.

These concerns about China have been aired in many other corners of Congress.

At a hearing on “Strategic Competition with China” held last month by the House Armed Services Committee, Rep. Matt Gaetz (R-FL) stated that China is pursuing a “systemic strategy of intellectual property theft, particularly at college campuses.” Later in the hearing, Rep. Vicky Hartzler (R-MO) said the Department of Defense has told Congress that China is “actively pursuing an intensive campaign to gain access to U.S. technology by using Chinese nationals such as students or researchers who are studying at U.S. universities and working in U.S. labs.”

Asked what could be done to mitigate these threats, witnesses highlighted the tensions between maintaining an open R&D environment and attracting foreign investment while also protecting national security. They said U.S. institutions should do more to understand whether they are engaging with entities tied to the Chinese government, and that foreign investment review mechanisms should be modified to better evaluate emerging technologies that could have both civilian and military applications, so-called dual-use technologies.

Congress is currently considering overhauling the Committee on Foreign Investment in the United States (CFIUS), an interagency panel that advises the president on whether acquisitions of U.S. companies by foreign entities could pose national security risks. Earlier this week President Trump blocked an attempted acquisition of the telecommunications company Qualcomm after CFIUS expressed concerns that the deal could have benefited the Chinese company Huawei.

Sens. John Cornyn (R-TX) and Dianne Feinstein (D-CA) are co-sponsoring a bill to strengthen the CFIUS review process. Cornyn has said that China and other countries are evading CFIUS scrutiny by focusing on dual-use technologies and startup companies.

Other legislators are focusing on the U.S. export control system in addition to CFIUS. At a House Foreign Affairs Committee hearing on export control reform held this week, Committee Chairman Ed Royce (R-CA) promoted a bill he is co-sponsoring with the panel’s top Democrat that would overhaul the system and improve oversight of dual-use technologies.

"Alarmingly, our competitive edge is increasingly under attack by policies from China, Russia, and others that seek to obtain advanced technologies and intellectual property by hook or crook,” Royce said in his opening statement, later adding, “In this global economy, turning inward is not the solution to these challenges. But we also cannot allow others to cheat U.S. employers — or worse, use our sensitive technology to undermine our national security.”

Several news outlets reported this week that the Trump administration is preparing a set of measures to punish China for exploiting U.S. intellectual property and put a dent in the U.S.–China trade imbalance. In addition to tariffs and investment limitations, Politico reports,

The administration is also considering restricting visas for Chinese citizens or tightening controls on exports of certain goods or technologies that have both military and civilian uses, two of the administration officials said. The visa restrictions could hit Chinese students going to school in the United States, especially graduate students in science and technology programs, as well as other Chinese nationals working in sensitive jobs, such as at national laboratories. But some administration officials have raised objections to the visa restrictions, and it’s unclear whether they’ll be included in the final package.

The Wall Street Journal has also reported that the package may include “limits on visas to Chinese students, academics, and executives to visit or study in the U.S.”

Such actions would not be entirely unexpected. In the new National Security Strategy, released in December 2017, the Trump administration states it plans to “review visa procedures to reduce economic theft by non-traditional intelligence collectors [and] consider restrictions on foreign STEM students from designated countries to ensure that intellectual property is not transferred to our competitors, while acknowledging the importance of recruiting the most advanced technical workforce to the United States.”

Furthermore, in August 2017, Trump ordered the U.S.’s top trade official to conduct an investigation to determine “whether acts, policies, and practices of the Government of China related to technology transfer, intellectual property, and innovation are unreasonable or discriminatory and burden or restrict U.S. commerce.”​

The intellectual property investigation is not yet complete, but a public hearing held by the investigation committee in October 2017 provides a window into its work. For instance, a representative of the Commission on the Theft of American Intellectual Property testified that China is conducting a broad industrial espionage campaign with targets ranging from “small industrial companies to high tech start-ups, from professors with National Science Foundation grants to our biggest corporations.”

China’s Chamber of International Commerce has disputed the premise of the investigation, arguing that none of the submissions to the investigation committee have “provided evidence that may prove the existence of the alleged ‘unreasonable’ or ‘discriminatory’ behaviors, e.g. forced technology transfer.”

It is not yet clear when the investigation will conclude, but the set of measures under consideration reportedly could be announced within the next few weeks, although they might be implemented in phases.