Efforts by Congress and the Department of Energy to spur the development and commercialization of advanced nuclear reactors have gained steam in recent months, though some moves have received criticism.

In the new Congress, lawmakers are poised to continue their ongoing efforts to bolster the U.S. nuclear industry by promoting technological innovation. In the latter half of 2018, proponents of the industry in both the House and Senate secured the enactment of two new laws that aim to promote the development and commercialization of “advanced” reactor designs: the Nuclear Energy Innovation Capabilities Act and Nuclear Energy Innovation and Modernization Act. Meanwhile, the Department of Energy has been taking steps of its own to support the industry in its pursuit of such reactors and other new technologies.

Advanced reactors have attracted interest from both established players in the nuclear industry and new entrepreneurial ventures. They employ novel design features, such as non-traditional fuels and coolants, that depart significantly from the large light water reactors the industry has operated for decades. Many advanced reactors could be built on smaller scales and at lower cost. Other design features promise improvements in operational safety and more manageable waste output.

Due in large part to the prohibitive expense of building them, only two commercial light water reactors have been brought into operation in the U.S. in the last quarter-century, and only two others are expected to be finished in the near future. Meanwhile, many existing nuclear plants have been, or are scheduled to be, shut down. Proponents of nuclear power believe advanced reactors provide a route to a new era of economic viability. They urge investment in such reactors now to prevent other nations, notably China and Russia, from dominating the field in the years ahead.

The Nuclear Energy Innovation Capabilities Act directs DOE to take several steps to assist industrial players in developing advanced reactor designs. Its most consequential provision instructs the department to prepare to build a Versatile Test Reactor, a user facility that could test fuels and materials intended for use in certain kinds of advanced reactors by irradiating them with high-energy neutrons. Idaho National Laboratory has already contracted with GE Hitachi to develop a conceptual design for the facility along with associated cost and schedule estimates. The facility is anticipated to cost at least $2 billion, and DOE is expected to formally evaluate the project for initial approval soon.

The act also directs the department to establish a National Reactor Innovation Center at which DOE and industry experts can test and validate reactor concepts. It directs the department to maintain a high-performance computational program for modeling and simulation aiding advanced reactor development. Finally, it instructs DOE to establish a cost-sharing program to assist companies in applying for licenses for advanced reactors.

Complementing these efforts, the Nuclear Energy Innovation and Modernization Act sets milestone deadlines for Nuclear Regulatory Commission to develop procedures and requirements that will ease the licensing process for a wide variety of advanced reactor designs. NRC has already begun this process, working in close collaboration with DOE laboratories and industry stakeholders. The act also sunsets the requirement that 90 percent of NRC’s budget derive from fees it collects from licensees, a move intended to prevent established utilities from bearing the costs of the commission’s preparations for licensing advanced reactors.

There were also other bills related to advanced reactors introduced during the last Congress that did not become law. The most far-reaching was the Nuclear Energy Leadership Act, which, among other provisions, would have required DOE to conduct no less than four advanced reactor demonstration projects by the end of fiscal year 2028. 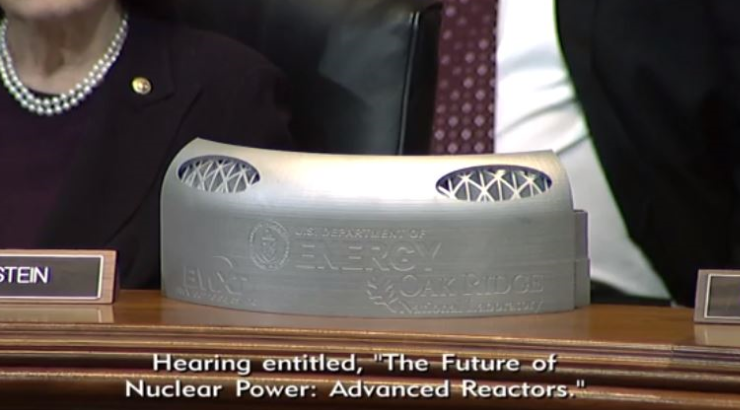 A 3D-printed section of a microreactor core prototype from Oak Ridge National Laboratory.

Although no new advanced reactor legislation has yet been introduced in the new Congress, discussion of the subject has already begun, with the Senate Energy and Water Development Appropriations Subcommittee holding a hearing dedicated to the subject on Jan. 16.

This hearing is to discuss perhaps the most promising way to assure a nuclear industry for America’s future, and that is to accelerate the development of advanced reactors. And specifically, to deal with the single biggest obstacle facing this development, which is one word — cost.

As an example of how costs could be controlled, he spotlighted Oak Ridge National Laboratory’s Transformational Challenge Reactor project, which Congress has funded at $30 million this year. Combining the lab’s expertise in both 3D printing methods and nuclear technology, the project aims to 3D print a complete microreactor core.

Oak Ridge Director Thomas Zacharia testified that the laboratory has set the “audacious goal” of completing work on the reactor in 60 months. The objective, he said, is not to compete with commercial advanced reactors, but rather to “change the manufacturing paradigm” around nuclear energy. He said 3D printing will streamline the design and testing of reactor parts, while its versatility will allow multiple parts to be combined into a single component, radically reducing the number of components that need to be certified for licensing purposes.

Christina Back, vice president for nuclear technology and materials at General Atomics, made the case that DOE can play a catalyzing role in commercializing new reactor designs. She urged the committee to consider providing DOE with funds to support R&D on a “small number” of technology concepts that promise to further improve advanced reactor designs, citing high uranium-density fuels that would improve efficiency as an example. Under her proposal, each concept would receive between $10 million and $30 million per year over five years, with grantees also required to pitch in funds, arguing that exploring concepts is necessary before companies can commit to a particular pilot plant design.

Other committee members who attended the hearing were less enthusiastic than Alexander about new technologies. Subcommittee Ranking Member Dianne Feinstein (D-CA) said she supports R&D but pointed to the need to address the industry’s ongoing challenges with matters such as safety and waste disposal. “If I'm going to help launch anything with my little vote, I want to know it's safe and it's practical and it's going to work and it's cost effective,” she said. 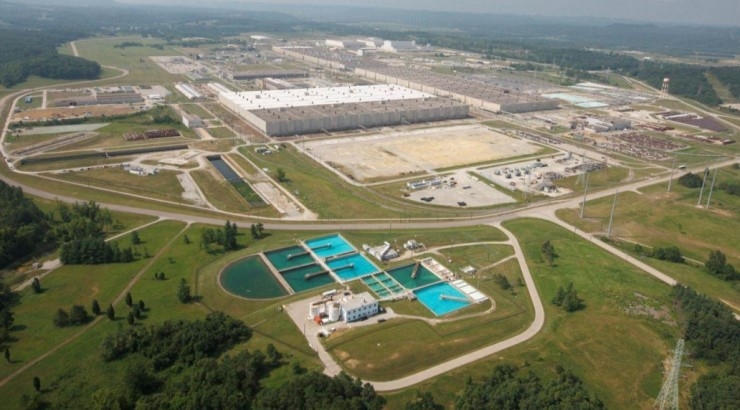 While Congress considers further ways to promote advanced reactors, DOE is taking some steps on its own initiative. Edward McGinnis, the top administration official at the DOE Office of Nuclear Energy, reviewed several of these efforts in his testimony at the hearing. Among them are the establishment of a domestic supply of high-assay low-enriched uranium (HALEU).

HALEU is uranium enriched so that the highly fissile uranium-235 isotope comprises between 5 and 20 percent of its weight. While most uranium fuel for nuclear reactors is enriched to less than 5 percent uranium-235, some advanced reactor designs require HALEU fuel to operate.

The Nuclear Energy Leadership Act as well as a standalone bill introduced in the last Congress would have required DOE to produce it. However, in January DOE approved plans for Idaho National Laboratory to begin producing a small amount of HALEU fuel for R&D purposes. It also announced its intent to award a three-year, $115 million no-bid contract to Centrus Energy to demonstrate HALEU production at the nuclear fuel production plant that it formerly operated in Ohio.

The latter move has drawn criticism from Senate Environment and Public Works Committee Chair John Barrasso (R-WY), who suggested in a letter to Energy Secretary Rick Perry that the contract is a “bailout” for Centrus, which declared bankruptcy in 2014. Barrasso also noted that Congress “did not authorize or fund this project” and pointed to Centrus’ past contract performance and business importing uranium from Russia as reasons to be wary of the arrangement. Barrasso has been a vocal advocate for the uranium mining interests in his state.

In its notice of intent to award the contract, DOE stated that Centrus is “the only source capable of executing the contract activities to meet the requirements of the HALEU Demonstration Program,” which it aims to complete by October 2020. Ohio’s two senators have praised the project, citing its role in supporting advanced reactors and bringing jobs to the state.