The Trump administration seeks to shave about $1 billion from the National Science Foundation’s budget in fiscal year 2020. Within the constrained topline, NSF proposes to embark on a major upgrade of the Large Hadron Collider and press ahead with its ten “Big Ideas,” advancing new programs dedicated to mid-scale infrastructure and convergence research. 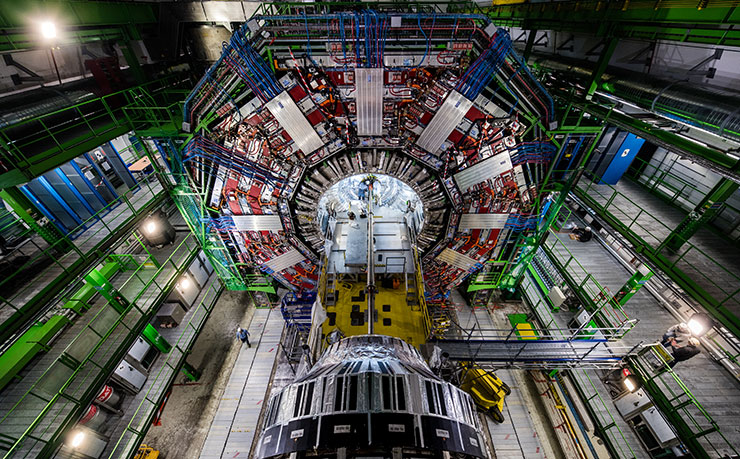 The Compact Muon Solenoid (CMS) is one of the flagship detectors at the Large Hadron Collider in Europe. NSF’s latest budget request includes $33 million to begin major upgrades of CMS and a separate detector at the facility.

Funding for the National Science Foundation would drop 12 percent to just over $7 billion under President Trump’s latest budget request, near where it stood at the beginning of the Obama administration. The proposal distributes cuts relatively evenly across NSF’s research and education programs, while favoring work related to administration priorities such as quantum science and artificial intelligence. Figures for NSF’s main accounts are available in FYI’s Federal Science Budget Tracker.

To date, Congress has shown no appetite for entertaining such a steep topline cut to NSF. At a hearing last week, the top Democrat and Republican on the House Commerce-Justice-Science Appropriations Subcommittee defended spending on NSF as a worthy investment even in times of fiscal restraint.

“NSF helps our economy grow, sustains our economic competitiveness, and enables us to remain the world leader in innovation,” said Committee Chair José Serrano (D-NY). “We will continue to work in a bipartisan manner to ensure that it is well-funded.”

Pressed to explain the proposed cuts, NSF Director France Córdova pointed to the president’s overall goal of shrinking the deficit by constraining non-defense spending. “The president’s budget reflects that steps we take today to reduce the deficit will help the nation remain globally competitive and allow our children and grandchildren to remain unencumbered by today's spending,” she said.

She nevertheless thanked Congress for the recent budget increase it provided NSF and highlighted how the agency currently is unable to fund about $4 billion worth of highly rated grant proposals each year.

The R&RA account would drop 13 percent to $5.7 billion, with the cuts spread across NSF’s research directorates. The exact distribution of the cuts is unclear because the budget document does not report how much NSF plans to spend on each directorate for fiscal year 2019. NSF submitted its final spending plan to Congress for approval shortly after the request was released.

The budget request does however provide the first comprehensive picture of how NSF distributed a large increase that Congress allocated to the R&RA account in fiscal year 2018. The Mathematical and Physical Sciences (MPS) Directorate and the Geosciences (GEO) Directorate stand out as the biggest beneficiaries, each receiving 10 percent increases over the prior fiscal year.

Much of this money went toward one-time facility upgrade and repair projects. Accordingly, these directorates are slated to receive larger cuts than most others for fiscal year 2020.

There is also considerable variation in how the money was allocated among divisions within these directorates. In MPS, the Astronomical Sciences Division received the lion’s share of the increase, which supported upgrades to several observatories. These ranged from repairing railroad tracks that move telescopes within the Very Large Array to developing a cutting-edge adaptive optics system for the Gemini Observatory.

The National Center for Atmospheric Research was a primary beneficiary of the boost to GEO. NSF reports it spent $27 million on “critical maintenance at the NCAR Mesa Laboratory, major upgrades to the NCAR Research Aviation Facility, and a new Early Career faculty visitor’s program.”

The steepest cuts proposed for fiscal year 2020 generally fall on divisions that received these one-off infusions. Conversely, divisions dedicated to multidisciplinary and integrative activities would grow because they manage each directorate’s contribution to NSF’s “Ten Big Ideas,” which the agency has prioritized in its recent budget requests.

Big Ideas. The budget makes clear NSF remains committed to the Big Ideas framework, requesting funds to advance all ten of the initial set. Six of the ten focus on particular areas of research, and the remainder represent “enabling ideas” that are dedicated to topics such as diversity in STEM and mid-scale research infrastructure. At the hearing, Córdova sought to dispel concerns that the Big Ideas represent a move toward prioritizing a handful of areas over the broader portfolio of “core” research. Referring to the initial ten ideas, she remarked, “They came out of the core and they will go back into it once they're funded for a few years, and new strategic thrusts will emerge.”

NSF requests $6.5 million to support planning for future Big Ideas. The bulk of the amount would go toward fleshing out winning submissions to the “Idea Machine” competition it held in 2018, which accepted proposals from both the scientific community and the general public. NSF further indicates it plans to explore additional novel mechanisms for identifying long-term research priorities that span directorates.

Convergence research. The budget also fleshes out how NSF intends to use the Big Idea framework to foster efforts that draw on multiple disciplines to address scientific and societal challenges. NSF requests $16 million for the Growing Convergence Research Big Idea to support capacity-building activities, exploratory grants, and identification of reviewers for convergent grant proposals. It also requests $60 million for a pilot Convergence Accelerator that would form teams of researchers drawn from different sectors to tackle projects that “have a high probability of resulting in deliverables that will benefit society within a fixed term.” The pilot would be limited to the Big Ideas on the Future of Work and Harnessing the Data Revolution. NSF anticipates that external partners will provide $40 million to the effort.

Quantum information science. The budget includes approximately $106 million for quantum information science, which is 13 percent above the amount spent in fiscal year 2018. The largest contribution would come from MPS ($58 million), followed by the engineering and computing directorates ($29 million and $15 million, respectively). The biology directorate would pitch in the remaining $3 million, supporting fundamental research on quantum phenomena in living systems. As a part of its Quantum Leap Big Idea, NSF states that it plans to increase support for “center-scale” quantum research activities through the recently issued Quantum Leap Challenge Institutes solicitation, fulfilling requirements of the National Quantum Initiative Act.

Multi-messenger astrophysics. NSF requests $55 million for the Windows on the Universe Big Idea, which is about double the amount spent in fiscal year 2018. The program will support integrated observations of electromagnetic, particle, and gravitational signals with NSF’s existing facilities. It will also support planning for the next generation of astronomical observatories.

Facility O&M pilot program. As part of its effort to mitigate the burden of rising research facility operations and maintenance costs, NSF requests $10 million to launch a “Facility Operation Transition” pilot program. Its primary purposes would be to “(1) partially support initial O&M of new facilities so that the full O&M costs can be gradually absorbed into the managing division or directorate, and (2) partially support divestment of lower-priority facilities, the full cost of which may significantly impact individual division or directorate funding.” In its first year, $8 million would be split between three major facilities that are within five years of beginning operations: the Daniel K. Inouye Solar Telescope, the Ocean Observatories Initiative, and the National Ecological Observatory Network. The remainder would support a portfolio analysis of “science priorities and divestment opportunities” in addition to “investments in actual divestment activities.”

Arecibo Observatory. NSF proposes to ramp down O&M funding for the Arecibo Observatory in Puerto Rico to $4.3 million, with the costs equally split between the MPS and GEO directorates. Both contributed about $5 million each in fiscal year 2018, and NSF seeks to reduce their contribution to $1 million each by fiscal year 2023. Serrano, who has previously criticized NSF’s plans to divest from the facility, asked several questions about Arecibo at the hearing and vowed to be a strong supporter for the observatory during his remaining time in Congress. (Just before the hearing, Serrano announced that he has Parkinson’s disease and will not seek reelection in 2020, though he plans to serve out his term.)

The budget includes $223 million for the MREFC account, which is the highest amount the administration has requested to date but 25 percent below the current enacted level. The Daniel K. Inouye Solar Telescope and the Regional Class Research Vessels projects received their final construction appropriation this year, freeing up funds for new projects.

Large Hadron Collider upgrades. NSF requests $33 million to begin a five-year, $150 million upgrade for two flagship detectors at the Large Hadron Collider. The Compact Muon Solenoid (CMS) and A Toroidal LHC ApparatuS (ATLAS) detectors would each receive $75 million through the project to prepare them for higher luminosity beam operations that will begin in 2026. Meanwhile, the Department of Energy Office of Science is also requesting $50 million for an associated upgrade to the particle accelerator and $46 million for upgrades to CMS and ATLAS.

Mid-scale research infrastructure. NSF proposes to expand its new agency-wide program dedicated to building research infrastructure that costs between $6 million and $70 million. For the first time, NSF requests funding for the program through the MREFC account to support projects in the $20 million to $70 million range. Projects in the $6 million to $20 million range would be funded through a separate agency-wide program in the R&RA account.

NSF identified high demand for mid-scale projects through a survey of the research community, and the National Science Board endorsed the creation of an agency-wide program. Córdova told the House Appropriations Committee that NSF has received about 400 proposals totaling $4.7 billion worth of projects through a recent solicitation for the program. Asked by Serrano for examples of what types of projects the program might support, Córdova cited recently funded mid-scale projects: Advanced LIGO Plus, the Frontera supercomputer at the University of Texas at Austin, upgrades to the Alvin submersible vehicle, and refurbishment of a shake table at an earthquake research center.

Large Synoptic Survey Telescope. Funding for LSST will ramp down slightly to $46 million as it nears completion in fiscal year 2022. Located in Chile, LSST will repeatedly image wide tracts of the sky over an initial survey period of ten years, enabling studies of transient phenomena and helping to identify asteroids that could impact the Earth.

The budget for the EHR Directorate would drop 10 percent to $823 million under the request. The cuts are spread across the directorate, which supports a variety of fellowship programs and research on STEM education pedagogy. Funding for NSF’s flagship Graduate Research Fellowship Program would drop 10 percent to $257 million, which would result in about 400 fewer new fellowships being awarded.

A few programs tied to priority areas would receive steady funding or slight increases. NSF’s agency-wide Innovation-Corps program, which teaches scientists entrepreneurial skills, would remain at $33 million, though EHR's small contribution would be zeroed out. The Advanced Technological Education program, which supports career and technical education programs at community colleges, would rise to $75 million, a 14 percent increase over the amount spent in fiscal year 2018. NSF has recently taken a strong interest in better understanding the types of jobs that require STEM skills but that do not necessarily require a four-year degree.

NSF’s marquee effort for broadening the participation of underrepresented groups in STEM fields — the INCLUDES Big Idea — would receive steady funding of $20 million. At the hearing, Córdova stressed that INCLUDES is meant to build on successful strategies NSF has developed through its host of other STEM diversity programs.

“The basic challenge is how do you scale really good ideas,” she said. “That's what the INCLUDES program is really trying to do — that hasn't been done so much before.”