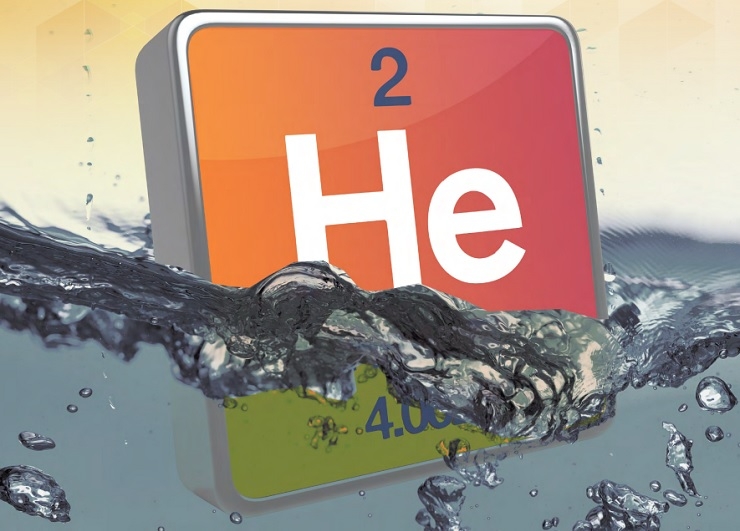 This article was first published in Physics Today. The following is an abridged version.

“We’re in a crisis mode” when it comes to helium, says William Halperin, a physics professor at Northwestern University. A shortage of the inert gas and a rise in its price are plaguing experimental physicists and chemists whose research requires low temperatures. Although helium prices and availability are perennial gripes in the community, in recent months the supply has become so restricted by growing industrial demand that users have been forced to decommission superconducting magnets, a measure that could permanently render some useless.

In the last year, there have been three “shocks” to the helium supply, says Sophia Hayes, a Washington University in St. Louis (WUSTL) chemistry professor who studies such topics as spin orientation in semiconductors and new materials for capturing carbon dioxide for sequestration. The supply has become so scarce and prices so high that Hayes has shut down two of six nuclear magnetic resonance (NMR) spectrometers in her laboratory. The instruments are a standard tool for university chemistry departments, and many institutions have half a dozen or more of them. At the core of each is a high-field superconducting magnet that must at all times be kept cooler than liquid helium’s boiling point of 4.2 Kelvin.

If helium levels get too low, magnets will warm to their resistive state. The conversion of stored current to heat could damage the coil irreparably or prevent magnets from reattaining their original field strength. It’s a slow and expensive process to return the magnets to their superconducting mode, and they can require 1,000 liters of helium — costing up to $25,000 at today’s prices, says Halperin.

Helium is a nonrenewable resource, and liquid helium has a limited shelf life. But distributors have recently been unwilling to supply it on the usual short notice, says Halperin. Unless, that is, customers are willing to pay an emergency fee of $25 to $50 a liter.

A 2016 report from the American Physical Society (APS), the American Chemical Society (ACS), and the Materials Research Society estimated that 400 U.S. research groups, mostly in the physical sciences, rely on liquid helium for experiments. (APS is an AIP Member Society.) In addition, research groups that use liquid-helium-enabled instrumentation, such as NMR spectrometers and superconducting quantum interference devices, number in the thousands

The situation at WUSTL has reached the point where helium users have just instituted a triage system: Applications that must stay cold continuously, such as NMR spectrometers and particle accelerators, get first dibs. Urgent experiments go next, followed by those that could be put off for a few weeks or months if necessary.

Kornbluth estimates the current deficit of supply worldwide at around 10 percent. Some researchers report a level of rationing greater than that, he says, because the shortage has not affected all the major suppliers equally. Globally, supply has been nearly static. Consumption has grown in the aerospace sector and in the East Asian semiconductor industry, particularly in China, which is second only to the U.S. in helium consumption.

Helium prices probably have yet to peak, says Kornbluth. The supply crunch should begin to ease next year when a new helium purification and liquefaction facility in Qatar is expected to come on line and add 11 mcm to the global supply. Russian energy giant Gazprom has a new source in eastern Siberia that is expected to begin operation in 2021 and eventually supply up to 55 mcm per year. A second, smaller new Russian source, also in eastern Siberia, will start production around the same time. A major helium prospect in Tanzania may be developed if helium prices remain high.

Another key cause of the shortfall is the continued decline in the ability of the U.S. Bureau of Land Management (BLM), which manages the federal helium reserve in Amarillo, Texas, to deliver helium to private suppliers. For a decade or so beginning in 2004, the BLM was selling 59 mcm annually. But as the crude helium (50 to 70 percent pure) is withdrawn from the underground storage formation, the pressure drops, slowing extraction. According to the BLM, deliveries will be limited to around 20 mcm this year, a little more than half the 2016 amount.

After passage of legislation in 2013 to privatize the reserve, the BLM began holding annual auctions of helium, accompanied by sale of a smaller quantity at a fixed price. The final public auction and sale, totaling 8.5 mcm, was held last summer, and sales are now restricted to federal users. Universities that use at least 7,500 liters of helium for federally sponsored research are eligible for reserve helium. But there are no restrictions on the price that distributors can charge for refining and liquefying the 99 percent pure helium product research users need.

As mandated by the legislation, the sale of all the government’s reserve assets must occur no later than Sept. 30, 2021. At that point, an estimated 68 mcm of helium will remain in storage, says Sam Burton, manager of the BLM’s Amarillo Field Office. The terms under which that helium is to be sold have yet to be worked out.

Because of their large numbers and small individual requirements, researchers are largely at the mercy of their suppliers. To increase their leverage, APS and ACS in 2016 organized a one-year pilot purchasing arrangement for a small number of universities through the Defense Logistics Agency (DLA), which had long been purchasing helium for other federal purposes. The subsequent two-year supply contract negotiated by the DLA expired on Jan. 31.

No vendor would offer the DLA a new two-year pact, and only at the last minute did a supplier agree to a one-year contract extension — at nearly double the price of the expiring arrangement, says Mark Elsesser, manager of science policy at APS. Multiple sources say the offered price under the one-year DLA deal is $21 to $23 per liter, compared with around $12 previously. Nearly all the 20 universities who signed up with the DLA have agreed to the price, Elsesser says.

In December, APS and ACS arranged conference calls between helium users and staffers on the House Science Committee and the House Natural Resources Committee. In February, researchers conferred with the White House Office of Science and Technology Policy.

An OSTP spokesperson declined to comment on the talks but noted that helium was identified on a list of critical minerals published last May by the Interior Department in response to an executive order by President Trump. That directive calls for a report assessing progress with recycling and finding technological alternatives to the listed minerals, strategies for reducing their consumption, and other steps. The report, which was supposed to be completed last summer, has yet to be released. 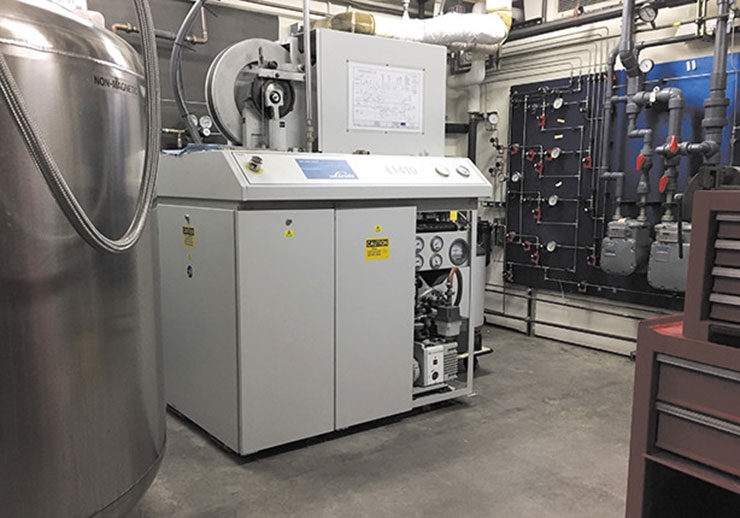 The central helium facility at Northwestern University can liquefy up to 50 liters per day from instruments across the campus.

A partial solution to alleviate the shortage is to recapture and liquefy the helium that boils off. The cost of a small-scale liquefier, capable of producing 20 liters a day, is $100,000 to $150,000, says Halperin. Few principal investigators can afford such an up-front cost. The National Science Foundation has a $1 million dedicated program to pay for a half-dozen of its largest helium-consuming grantees each year to acquire liquefiers.

Halperin manages a central helium liquefying facility for Northwestern. It’s one of just a few facilities in the country where helium is piped in from users across the campus. Such central systems, which can produce 40 to 50 liters per day, can cost several million dollars. Even with that capability, Northwestern requires as much as 10,000 liters of additional liquid helium per year. Halperin’s own lab recycles with 95 percent efficiency; 65 percent is recovered campus-wide because some researchers use helium inefficiently, he says.

At WUSTL, the four NMRs that Hayes has kept cooled require a total of 2,200 liters of helium annually. Even with a subsidy from the chemistry department, her lab’s annual helium bill is nearly $39,000. Hayes says she could cut that bill to $7,700 at current prices — excluding the initial investment and annual operating costs for the system — with a liquefaction system that recycles with 80 percent efficiency.

In the meantime, more efficient use of helium by researchers would help. In Europe, says Hayes, “they protect every puff of gas they can get out of a dewar. Why do we do it differently?”

Hayes and Halperin are participating in a free webinar on helium supply challenges on April 11. They will discuss “strategies in an era of helium shortages like conservation and helium collection or recycling.”