An expert review panel has proposed that the National Science Foundation create a directorate dedicated to materials research as part of a broader effort to focus national attention on the field. 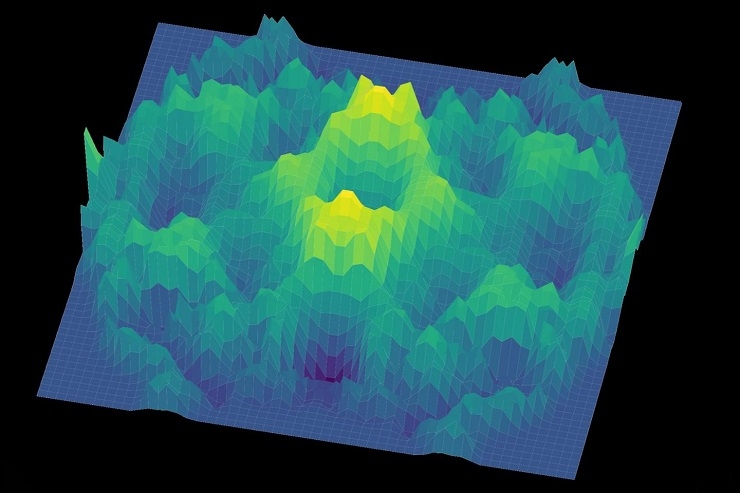 A visualization of the spin-excitation continuum for a candidate quantum spin liquid, an exotic material with unique magnetic properties.

With the U.S. facing increasingly formidable international competition in materials research, an expert panel has proposed that the National Science Foundation elevate its work in the field to the directorate level, the highest in its hierarchy of science programs. Currently, NSF’s Division of Materials Research (DMR) is one of five divisions within its Mathematical and Physical Sciences (MPS) Directorate.

The panel was one of the “committees of visitors” (COVs) that NSF forms periodically to review divisions’ grantmaking procedures. However, the panel also opted to comment at length on broad strategic matters, arguing that a “business as usual” approach to funding the field would “compromise the long-term competitiveness of U.S. innovation.”

In recommending what it calls a “drastic” change in NSF’s organizational structure, the panel points to the recently completed National Academies decadal survey for materials research, which concluded that U.S. leadership in the field is in jeopardy due to the scale of investment by countries in Europe and East Asia.

Discussing the report at a meeting of NSF’s MPS advisory committee on Oct. 23, the COV’s chair, Cornell University professor Melissa Hines, stressed the intention is not to siphon funding from other MPS divisions.

“I know I feel like I'm standing up here saying we need to secede from the union. And that's really not what I'm saying,” Hines remarked. “I'm a fundamental chemist at heart. I'm sort of a physicist too. I really love fundamental research. But we're trying to figure out how to increase funding for everyone,” she said.

Hines contrasted the trajectory of DMR’s budget, which has increased by about 2.5% per year over the past two decades, with that of the materials research budget of China’s National Natural Science Foundation, which has rapidly climbed close to parity with DMR. Citing a recent analysis in the journal Nature, she added that China now publishes far more materials science papers than the U.S.

She also noted that China has made major investments in research infrastructure, including the construction of three new synchrotron light sources and two neutron sources over the past decade.

Outlining the consequences of such increased investment abroad, the COV report states that “institutions in China and other East Asian countries are increasingly recruiting established, highly successful materials researchers from U.S. universities — something that would have been unheard of a decade ago.”

Hines argued the current structure of MPS is a barrier to spurring a national focus on materials research, remarking, “Just politically, there is no way that Congress is going to reach down in NSF through MPS and grab DMR and say ‘you get more funding.’”

Hines noted that NSF has previously seriously considered creating a directorate dedicated to materials research. The 2011 COV report for DMR proposed such a move on the grounds that it would “provide a better representation of materials-related research within NSF and would raise the profile of materials research both nationally and internationally.”

In a follow-up to the 2011 report, NSF explained it ultimately concluded the reorganization would be “too difficult to achieve,” and noted DMR had instead decided to try to unite materials research efforts across NSF and other agencies through the Materials Genome Initiative.

Responding to Hines’ presentation, the head of the MPS directorate, Anne Kinney, applauded the passion with which she made the case for increasing support for materials research but questioned whether the division deserves special treatment. Kinney suggested one could make “exactly the same argument” for each of the directorate’s other four divisions.

She continued, “What I struggle with in terms of that recommendation [is] should we split into five? Or do we do better as a group that does profound fundamental science, where there's a lot of relations between what the different parts of this group does?”

Hines replied that one reason for treating DMR differently is that it is more interdisciplinary than the other divisions and often focuses on projects that could yield applications in the near term. “I don't think that DMR is primarily funding what I would call fundamental research. DMR’s focus is more on things that have a shorter time horizon,” she said.

The head of DMR, Linda Sapochak, disputed that characterization, saying, “All of NSF research is fundamental,” while agreeing that the division funds highly interdisciplinary projects.

Kinney also questioned whether spinning off DMR would lead to better budget outcomes. “One assumption that goes along with that is that as a separate directorate they would get more funding, and I don't think that's true at all. I think MPS is a very healthy directorate, and I think it actually is embraced within a healthy budget,” she said.

The MPS advisory committee returned to the subject later in the day during a conversation with NSF Director France Córdova, who is nearing the end of her six-year term at the agency. Córdova suggested the MPS directorate could benefit from a restructuring, but did not endorse the idea of creating a separate directorate for materials research.

“If I was starting six years all over again, I think I would really work on entities like MPS to really think about how they're structured because it seems very old fashioned to me,” she began. As an example, she described difficulty she has encountered in getting people to appreciate the contributions that physicists are making to astronomy.

“It's really a much broader topic than just [DMR] being like Texas or California and going off on their own. It's really about how you think about science, and the science of the future,” she continued. “It's about bringing people together. It's not about taking them apart, but how do you bring them together in new ways.”

“I hope that [DMR] stays in the fold,” she later added, noting her emphasis has been on encouraging more collaboration across NSF’s divisions and directorates through the “Big Idea” initiatives the agency rolled out in 2016.

“We keep having to break down our silos,” she concluded.