The White House convened a roundtable of federal agency and university leaders last week to discuss how best to structure new research centers and workforce development efforts created through the National Quantum Initiative. 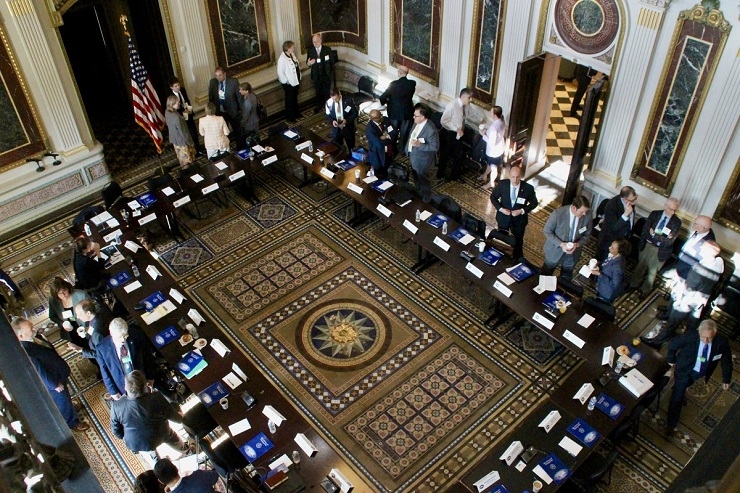 The White House Office of Science and Technology Policy convened a roundtable of agency and university leaders on May 31 to discuss plans for implementing the National Quantum Initiative (NQI) Act.

Six months after the act was signed into law, efforts to implement it are now well under way. The Department of Energy and the National Science Foundation are gearing up to create new research centers dedicated to quantum information science (QIS), while the National Institute of Standards and Technology is forming a quantum economic development consortium to assess R&D needs across industry. And in March, the OSTP established the National Quantum Coordination Office to oversee interagency efforts.

Discussion at the roundtable covered such questions as how best to structure the research centers, train a quantum-literate workforce, and spur entrepreneurship in quantum technology development. A main thread of the discussion was how to develop a truly national approach to advancing the field that engages a wide spectrum of institutions and ensures individual efforts do not work at cross-purposes.

Under the NQI Act, DOE and NSF are each required to establish between two and five research centers. On May 20, DOE issued a request for input in advance of its planned solicitation for center proposals.

The document indicates the department plans to fund “two or more” centers from among the proposals it receives, though DOE Under Secretary for Science Paul Dabbar told the roundtable it delineates the five types of centers the department anticipates creating. They span quantum communication, quantum chemistry and materials, qubit devices and sensors, quantum emulation and computing, and quantum foundries.

Dabbar also highlighted efforts underway in Chicago to position the city as a premier quantum research hub, and he briefly mentioned plans for establishing other regional hubs in New York and Los Angeles. More broadly, he said he believes innovation efforts over the past 30 years have been skewed too much toward information technology and have been “too narrow in terms of geographical footprint.” He further said not enough attention has been paid to developing a broad base of domestic infrastructure and human capital in the physical sciences.

NSF Director France Córdova noted her agency plans to award QIS center grants through its new Quantum Leap Challenge Institutes program. NSF anticipates it will provide each center up to $5 million per year over five years. She said the agency is placing a particular emphasis on supporting “convergent research” that brings people together from across disciplines.

Peter Schiffer, vice provost for research at Yale University, said co-location of research infrastructure is “extraordinarily important” based on his experiences with the Yale Quantum Institute, which launched in 2015, noting the benefits of being a car or train ride away from key facilities. Laurie Locascio, vice president for research at the University of Maryland, also attested to the value of co-location, citing the success of NIST’s Joint Quantum Institute, which was created at her university in 2006.

Terri Fiez, vice chancellor for research at the University of Colorado Boulder, said it is critical that quantum research hubs are connected so that they complement one another rather than compete. She said her university is forming partnerships with institutions in all the surrounding states to enable their students and faculty to take advantage of Colorado’s extensive laboratory infrastructure.

Another topic of discussion was the respective role of universities, national laboratories, major companies, and entrepreneurial ventures in training a workforce that is conversant in QIS. Córdova and NIST Director Walter Copan asked for input on ideal ways to introduce students to the subject and promote entrepreneurship, respectively.

Maria Zuber, vice president for research at MIT, suggested the best time to draw students into the field is after their third semester of college physics, when they are positioned to better grasp the underlying concepts. She noted MIT’s new Center for Quantum Engineering has been integral to developing curricula for courses in QIS.

Participants also discussed how the national push to advance QIS could inspire students to pursue careers in science as the space race of the 1960s did.

“Quantum could be that fascinating, strange, weird, quirky thing that draws interest even though you don’t understand quantum physics per se,” OSTP Kelvin Droegemeier posited. “We might want to think about how at the primary school level we could use quantum as a hook to draw people in with some stuff that’s really bizarre. I mean, kids like bizarre.”

Willie May, vice president for research and economic development at Morgan State University, pointed out that, although only a small fraction of the population will ultimately ever engage in quantum research, they will be users of QIS-enabled technology. Given that, he said serious thought ought to be put into providing appropriate training for end users.

Other participants commented on the surge of quantum technology startups and their role in drawing people into the field. However, caution was also aired against expectations of rapid progress in QIS.

“Generally speaking, it's slow, hard, expensive going,” said Charles Tahan, technical director of the Laboratory for Physical Sciences, a National Security Agency research center located near the University of Maryland. He added that people entering the field should understand they could ultimately have a bigger impact working in a national lab or a large company instead of a startup.

Droegemeier told FYI after the roundtable that the discussion about the importance of partnerships in the context of infrastructure stood out to him.

“When we think about building research facilities and major pieces of equipment, things like that, we need to be thinking about [how] we're not competing so much against one another, we're competing as a nation against others,” he said. “The key thing is that we can’t all have everything that’s needed. Some institutions are better resourced than others.”

Jacob Taylor, acting director of the National Quantum Coordination Office, said he felt the discussion was consistent with the Trump administration’s view that there is still much fundamental science to be done, pointing to the “science first” approach advanced in its QIS strategy document released last year. The administration is currently accepting feedback on the strategy in light of the passage of the NQI Act.

Asked whether increasing geopolitical competition could limit the U.S.’ ability to draw on foreign talent, Taylor noted the strategy document identifies a need to continue expanding international collaborations. He also commented on the potential that new export controls could be placed on QIS-enabled technologies.

“Many, many areas of emerging technology [work] through the process of balancing economic needs and growth opportunities with national security considerations,” he said. “I appreciate that it may seem like there's some sea of change coming, but maybe I don't see it that way,” he added, citing the long history of controls being placed on certain quantum technologies.