President Trump has ordered federal agencies to eliminate at least one-third of their non-statutory advisory committees created under the Federal Advisory Committee Act. Many science agencies use such committees as a mechanism for liaising with the research community. 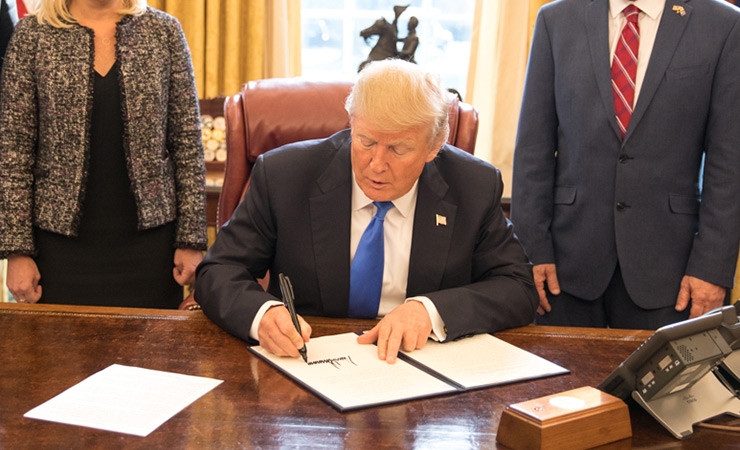 President Trump issued an executive order on June 14 that directs all federal agencies to eliminate “at least one-third” of the external advisory committees they have created under the Federal Advisory Committee Act (FACA). The order excludes FACA committees that are mandated by statute or established by presidential directive. It also exempts panels that conduct merit reviews of applications for government funding or contracts, or that provide “scientific expertise” related to the “safety or efficacy of products to be marketed to American consumers.” Agencies have until Sept. 30 to comply.

Agencies that support scientific research have established numerous FACA committees that are covered by the order. Comprising volunteers from the scientific community, these committees are routinely tasked with reviewing agency activities and conferring official recommendations. Committee meetings also serve as public forums at which committee members receive briefings from agency officials and discuss issues of common interest to the agency and researchers.

The federal government maintains a database of FACA committees that includes information about their role, the authority under which they were created, their activities, and their expenditures.

In directing agencies to terminate FACA committees, Trump’s order spotlights those that have accomplished their stated objectives, address an “obsolete” subject matter, and perform functions that have been assumed by another entity. It also points to committees for which an “agency determines that the cost of operation is excessive in relation to the benefits to the federal government.”

Although the order does not limit terminations to such committees, it does allow agencies to request waivers from the White House Office of Management and Budget if they regard more than two-thirds of their FACA committees as indispensible. Under the order, the OMB director may grant a waiver if a committee is determined to be “necessary for the delivery of essential services, for effective program delivery, or because it is otherwise warranted by the public interest.”

Agencies are also permitted to count toward their compliance any committees they have already terminated since the beginning of the Trump administration. It is not clear whether agencies will be allowed to consolidate committees. Agencies that support fewer than three FACA committees subject to termination are exempted from compliance, as are “independent regulatory agencies,” a category comprising 19 agencies that includes the Nuclear Regulatory Commission, but not, for instance, the Environmental Protection Agency.

Going forward, the order restricts the creation of new committees by capping the government-wide number of FACA committees at 350, exclusive of those required by statute, established by presidential directive, or supported by independent regulatory agencies. Once the cap has been met, agencies must secure a waiver from OMB to set up a new committee.

Although committees established by presidential directive are not counted toward agencies’ committee limit, the order also requires agencies to recommend by Aug. 1 whether any such committees they support should be continued. Agencies are also required to submit a “detailed plan” by the same date for the termination or continuation of committees required by statute, including recommendations for any necessary legislation.

Outside of merit review panels, most FACA committees supported by science agencies are subject to potential termination under Trump’s order.

Some of these, such as the six committees serving the Department of Energy Office of Science, are central to agency planning. For instance, the High Energy Physics Advisory Panel has been advising the government on the construction of particle physics facilities since the 1960s and oversees the Particle Physics Project Prioritization Panel (P5) process, which establishes a nationwide strategic direction for the field. Similarly, the Nuclear Science Advisory Committee has been producing periodic long-range plans for DOE since 1979. Those activities are serving as a model for a new long-range planning effort currently being undertaken by the Fusion Energy Sciences Advisory Committee.

Although it does not oversee an analogous planning process, DOE’s Basic Energy Sciences Advisory Committee is also highly active. Through its various reports, it has played a major role in shaping the department’s plans for developing its user facilities as well as its basic research programs. The committee’s meetings also effectively function as small conferences for stakeholders in DOE’s Basic Energy Sciences portfolio, with audience members well outnumbering committee members.

Other agencies use their FACA committees in concert with non-FACA groups. NASA, for instance, supports the NASA Advisory Council under FACA, and in 2016 it decided to spin off the council’s science subcommittees into separate FACA committees. However, to set the strategic direction of its science programs, the agency relies primarily on the decadal surveys administered by the National Academies, which is a nongovernmental institution chartered by law. In addition, NASA has itself chartered a series of “analysis and assessment groups” that provide input to its Planetary Science Division but are not under FACA.

The National Science Foundation currently supports a large number of FACA committees that advise its various research directorates and offices. It also shares certain FACA committees with DOE, and with NASA it is a key sponsor of the National Academies decadal survey for astronomy and astrophysics. Many strategic questions at NSF are handled through the National Science Board, the agency’s governing body, which has a membership drawn from the scientific community but was established under the agency’s organic statute more than 20 years before FACA’s enactment.

Some science advisory committees created under FACA are exempted from possible termination at this time. For example, the Astronomy and Astrophysics Advisory Committee, which advises NASA, NSF, and DOE, was mandated by the NSF Authorization Act of 2002. Several EPA committees, including its Science Advisory Board, are also established by law. NSF’s committee that recommends recipients for the National Medal of Science is similarly exempted because it was established by presidential directive.

In general, though, unless science agencies seek and secure waivers from OMB, it is unlikely they will be able to comply with Trump’s order without disrupting their current arrangements for obtaining input from the scientific community. How they respond, and whether Congress weighs in, are matters that will unfold as the summer continues.