A 3% increase in NASA’s science budget will keep all missions and programs on track, including the James Webb Space Telescope and Wide Field Infrared Survey Telescope, which both required substantially larger funding commitments this year.

Following last month’s enactment of fiscal year 2020 appropriations, NASA’s $21.5 billion budget is increasing by more than $1 billion, with the lion’s share of the boost going to its human exploration program. The agency’s Science Mission Directorate will see a more modest increase of 3%, bringing its budget to $7.14 billion.

Much of the additional science funding will go toward higher spending on NASA’s two flagship space telescope projects, the James Webb Space Telescope (JWST) and Wide Field Infrared Survey Telescope (WFIRST). Although the Trump administration had proposed cancelling WFIRST, Congress has decided to fully fund it in addition to covering the costs associated with JWST’s recent launch delay. Other science missions are likewise receiving the funding they need to remain on track. 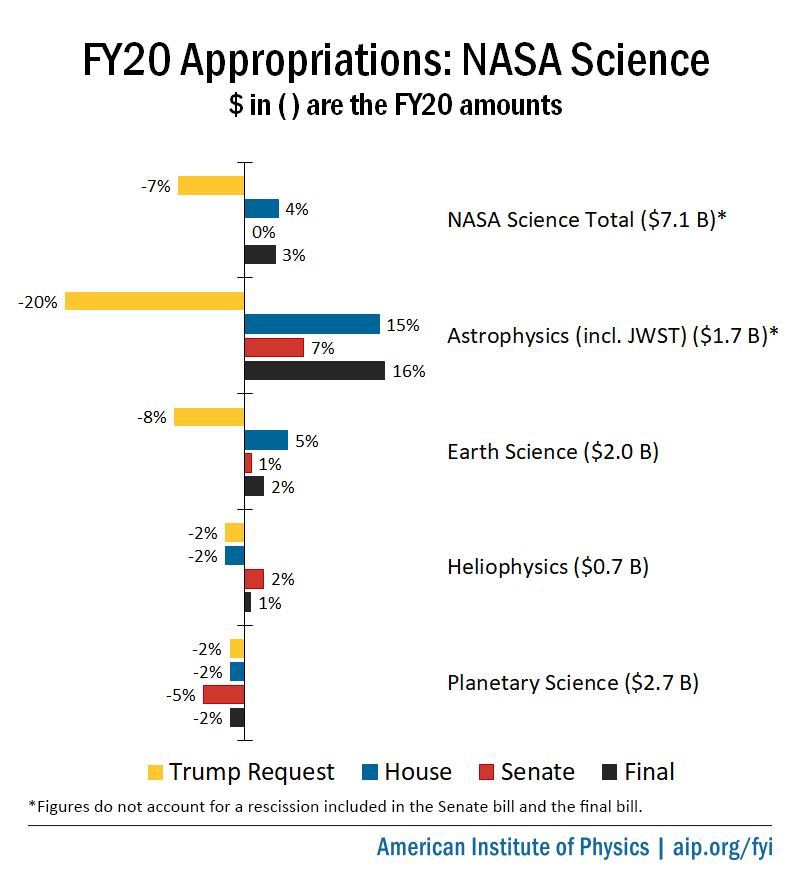 This year’s NASA appropriation was enacted through a package bill. An accompanying explanatory statement provides detailed funding direction and policy guidance on selected matters. Additional direction in the House and Senate reports on their original NASA spending bills will also apply, except where negated by language in the final statement. For summary tables, see the FYI Federal Science Budget Tracker.

The combined budget for NASA’s Astrophysics Division and the separate JWST account is rising 16% to $1.73 billion. However, outside the increases specified for JWST and WFIRST, astrophysics funding is declining 10% to $796 million. Division Director Paul Hertz has said the level is “adequate” to proceed with the division’s planned programs and projects.

James Webb Space Telescope. Funding for JWST is increasing 39% to $423 million, covering part of the costs added to the project by a launch delay announced in 2018. NASA had planned to divert $70 million in fiscal year 2019 to smooth the absorption of those costs. However, Congress is now rescinding that amount and allocating it directly to JWST by funding the project at $70 million more than NASA’s fiscal year 2020 request for it. JWST will need a similar level of funding in fiscal year 2021 before its budgetary requirements decline following its launch, which is still targeted for March 2021.

Wide Field Infrared Survey Telescope. Funding for WFIRST is climbing 64% to no less than $511 million, which is expected to be close to its peak level. Congress specifies that up to $65 million of the funding is for the mission’s coronagraph technology demonstration. It also reiterates last year’s direction that the mission should adhere to a $3.2 billion cost cap, which is at the bottom end of NASA’s current cost estimates. The agency will establish a firm baseline cost and schedule commitment for WFIRST when the mission completes its confirmation review, expected to take place early this year.

Research. Congress specifies that the division should spend the requested amount of $251 million on its Astrophysics Research program. The portions of the program that support technology development and research grants are currently in the middle of a multiyear funding ramp-up.

Funding for the Planetary Science Division is declining 2% to $2.71 billion this year, ending six straight years of growth that doubled the division’s annual budget.

Europa missions. Congress is continuing to support two missions to Jupiter’s moon Europa, which is believed to harbor a liquid water ocean beneath its icy crust. Funding for the Europa Clipper, a multiple-flyby mission, is ramping up to $593 million from the $545 million Congress provided last year. Congress disregarded a request from NASA’s inspector general to drop a requirement that the mission launch using the Space Launch System (SLS) rocket NASA is still developing, though lawmakers did push the mission’s required launch date back from 2023 to 2025.

Congress likewise retained the SLS launch vehicle requirement for a follow-on lander mission and pushed its required launch date back from 2025 to 2027. In NASA’s response last year to an internal audit dismissing the feasibility of a 2025 launch, the agency indicated it was not planning on launching a lander any earlier than 2030. In any case, Congress is not providing new funding for the lander this year. Per the House report, the project is expected to have sufficient funds remaining from last year’s appropriation of $195 million to continue. Congress has also scaled back a House proposal to nearly double technology development funding for icy planetary surface exploration to $60 million, providing instead only $3 million more than the fiscal year 2018 level.

Lunar missions. The budget for robotic lunar science missions is increasing from $218 million to as high as $300 million. That level meets NASA’s initial request for lunar science as well as a supplemental request to fund a robotic rover that would support the Artemis crewed lunar exploration program. In October, NASA announced plans for the Volatiles Investigating Polar Exploration Rover (VIPER), with a projected launch readiness date of 2022. However, this month the agency postponed its procurement of delivery services for the rover, which are to be provided through NASA’s Commercial Lunar Payload Services (CLPS) program. NASA is planning on launching two smaller landers through the CLPS program in 2021 and has just announced their science and technology payloads. 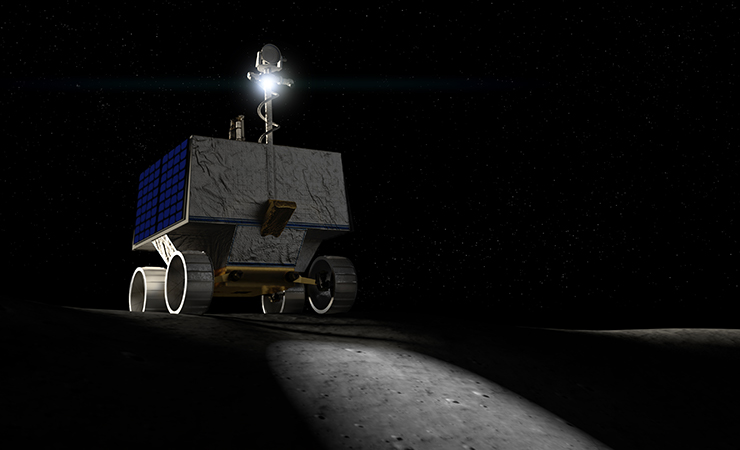 Planetary defense. The House and Senate reports specify level funding of $160 million for planetary defense missions. Within that amount, the explanatory statement specifies $36 million for work on the Near Earth Object Surveillance Mission that NASA recently announced it is moving ahead with in lieu of the proposed NEOCam mission. NASA will manage the mission directly and projects it will launch in the mid-2020s and cost between $500 million and $600 million to develop. The objective is to expedite the behind-schedule search for asteroids and comets that could pose a risk of a devastating collision with Earth. The Senate report also directs NASA to study the prospect of adding a radio transmission capability to the Green Bank Observatory in West Virginia, citing in part the telescope’s usefulness for characterizing near Earth objects.

Funding for the Earth Science Division is increasing by 2% to $1.97 billion, continuing a recent trend of essentially flat funding.

PACE. Funding for the Plankton, Aerosol, Cloud, ocean Ecosystem (PACE) satellite is ramping down from $161 million to $131 million. Congress has consistently supported the mission despite the Trump administration’s repeated proposals to cancel it. This past year, NASA gave the mission the green light to proceed into its advanced design and fabrication phase. It is expected to cost $890 million to develop.

CLARREO Pathfinder. The Trump administration has also repeatedly sought to cancel CLARREO Pathfinder, an instrument for measuring solar radiation reflected from the Earth that is scheduled to be installed on the International Space Station in 2023. Its funding will ramp up from $18 million to $26 million this year. The project is expected to cost about $100 million altogether.

The Heliophysics Division budget is increasing 1% to $725 million. The explanatory statement and House report provide no further instructions for the division, leaving language in the Senate report as Congress’ final direction.

Solar Terrestrial Probes. Funding for the Solar Terrestrial Probe program is increasing from $100 million to $183 million, primarily reflecting the ramp up of work on the Interstellar Mapping and Acceleration Probe (IMAP), which will study particles streaming to Earth from the edge of interstellar space. The mission has a cost cap of $492 million and is targeted for launch in 2024.

Space weather. Funding for the Space Weather Science Applications program is increasing from $15 million to at least $20 million. Senate language states the funding is to “support innovation in observational capabilities and advance research-to-operations, operations-to-research, and computational aspects of space weather mitigation.”

Artemis. NASA’s human exploration program is receiving a 19% budget increase that will go toward efforts associated with the agency’s Artemis program, which aims to return astronauts to the Moon in 2024. The budgets for NASA’s Space Launch System rocket and Orion crew vehicle will receive boosts, and there is also new funding for a crewed lunar lander, albeit not so much as NASA had requested. The agency indicates its 2024 Moon landing goal remains unchanged, but the program's budgetary requirements are expected to increase further in fiscal year 2021 and beyond.

Satellite servicing and robotics. Congress notes that NASA is now planning on combining its Restore-L mission, which aims to refuel Landsat 7 in 2022, with a secondary payload called the SPace Infrastructure DExtrous Robot (SPIDER), which will demonstrate in-space robotic manufacturing capabilities. Accordingly, while maintaining the current $180 million budget for the Restore-L mission, Congress is adding $47 million to support SPIDER as well.

STEM education and outreach. The budget for NASA’s Office of STEM Engagement is increasing 9% to $120 million. The Trump administration has repeatedly sought to eliminate the office, which funds student grants and outreach activities as well as grants that build research capacity in states that generally receive a lower share of federal research funding. The Science Mission Directorate’s separate $45 million budget for STEM education activities will rise by at least $600,000 this year.