STEM education programs across federal agencies would see flat to moderately increased budgets under the House and Senate’s spending proposals for fiscal year 2021. 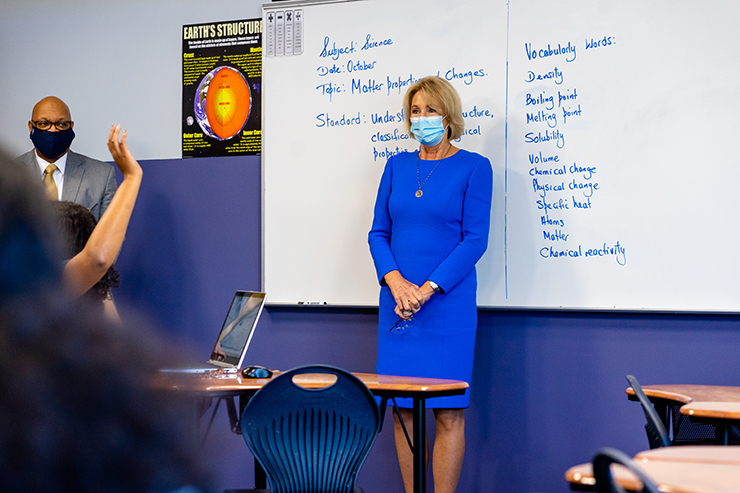 STEM education programs across federal agencies would generally see flat budgets or moderate increases under the House’s and Senate’s proposed appropriations for fiscal year 2021. Appropriators again reject the Trump administration’s proposals to consolidate various Department of Education grant programs and disband the education offices at NASA and the National Oceanic and Atmospheric Administration. They also do not support the Department of Education's proposals to launch two new STEM-focused initiatives that would center on career and technical education (CTE) and Minority-Serving Institutions, respectively.

Highlights for selected programs are summarized below, and details are available in FYI’s Federal Science Budget Tracker.

Formula grants. Congress rejects the Trump administration’s proposal to discontinue three major grant programs that states and school districts can use to support various STEM and non-STEM education activities. Instead, the House would provide a 1% budget increase each for the $1.2 billion Student Support and Academic Enrichment Grants program, the $2.1 billion Supporting Effective Instruction State Grants program, and the $1.3 billion 21st Century Community Learning Centers program. The Senate would provide a 3% increase for the Student Support and Academic Enrichment Grants and flat funding for the other programs.

Education Innovation and Research. The Senate proposes $75 million and the House $85 million for STEM-focused grants through the Education Innovation and Research program, which is currently funded at $65 million, and rejects the administration’s proposal to consolidate the program into a broad block grant. The House directs that these funds must be used to provide “additional PreK–12 computer science and STEAM [science, technology, engineering, arts, and mathematics] grants to underrepresented students such as minorities, girls, and youth from families living at or below the poverty line to help reduce the enrollment and achievement gap,” and to bolster “teacher training, proficiency, and knowledge of STEAM and computer science courses.” The Senate similarly directs that the funds support computer science education and “applicants seeking to improve diversity and address disparities in access to participation in high-quality STEM education programs.”

Career and technical education. As part of its response to the recently updated Perkins CTE Act, the department proposes to increase support for grants focused on improving the quality of CTE education from $7 million to $90 million, with an emphasis on STEM fields. The House and Senate do not endorse the proposal, though, keeping the budget level.

Opportunity Zones initiative. The administration also proposes to expand the Minority Science and Engineering Improvement Program from $12.6 million to $150 million to support Minority-Serving Institutions located in Opportunity Zones, which are distressed regions that were granted favorable tax treatment under the 2017 tax reform law. Neither appropriations committee comments on the proposal, with the House instead proposing a slight funding increase to $13.4 million for the program and the Senate an increase to $15 million.

Through its Education and Human Resources Directorate, NSF funds various fellowship programs, STEM education pedagogy research, and research capacity-building efforts at Minority-Serving Institutions. The House bill would increase the directorate’s budget from $940 million to $970 million, with much of the additional funding directed toward programs that support groups underrepresented in STEM fields, while the Senate would increase the budget to $964 million.

It expresses particular concern about the “severe underrepresentation of Hispanic Ph.D. graduates in the STEM fields” and directs NSF to develop a plan to address the matter. It also notes that NSF does not have a dedicated program for Asian American and Native American Pacific Islander-Serving Institutions and urges the agency to increase grant funding opportunities for these groups.

The Senate proposes flat funding for these programs. It also directs NSF to fund its Graduate Research Fellowship Program at no less than the current level. In recent years, the administration has proposed to reduce the annual number of fellows supported through the program from about 2,000 to 1,600.

The Senate also expresses “strong support” for informal science education efforts, encouraging NSF to “coordinate and provide necessary support for investments in both in- and out-of-school time STEM education programs across federal agencies, including support for extracurricular STEM programs.”

NASA. The Senate proposes flat funding of $120 million for NASA’s Office of STEM Engagement, while the House proposes to increase its budget to $126 million. The House’s increase would be evenly divided among the Space Grant program, the Minority University Research and Education Project, and NASA’s EPSCoR program, which seeks to build research capacity in states and territories that traditionally receive a smaller share of federal research grant funds. The Trump administration has repeatedly proposed to shutter the office. For the separate education and public outreach efforts managed by NASA’s Science Mission Directorate, the Senate directs the agency to keep funding at no less than its current level of $46 million.

Department of Energy. The budget for DOE’s primary STEM education account, Workforce Development for Teachers and Scientists, would rise $2 million to $30 million under the House proposal and $500,000 under the Senate proposal. The House splits most of its increase between programs supporting undergraduate internships and graduate student thesis research at DOE labs.

Within available funds, the House also recommends that not less than $1.5 million go toward “outreach activities for the department to widely publicize its opportunities and diversify the applicant pool, with an emphasis on targeted recruitment of individuals traditionally underrepresented in STEM.” The Senate directs DOE to “establish a working group comprised of the Office of Science and national laboratories and a consortium of universities to assist universities in the development of a curriculum to promote the next generation of scientists utilizing artificial intelligence, quantum information science, and machine learning.”

DOE funds additional workforce development activities through other accounts and across its national laboratories. Through them, the House directs that at least $5 million go toward implementing the National Laboratory Jobs ACCESS Program Congress authorized last year, supporting pre-apprenticeship and apprenticeship programs focused on skills needed across the national laboratory complex.

Department of Defense. The Senate would accept DOD’s proposal to roll back the budget for the National Defense Education Program from $144 million to $100 million, while the House would only make a $7 million cut. The program supports STEM talent development through scholarships and fellowships, STEM outreach to children of military families, and initiatives such as the Manufacturing Engineering Education Program.

National Oceanic and Atmospheric Administration. Rejecting the administration’s proposal to eliminate all major programs in NOAA’s Office of Education, the House would instead increase the office’s budget from $30 million to $34 million, while the Senate would provide flat funding. Within its proposal, the House allocates $20 million for the José E. Serrano Educational Partnership Program with Minority-Serving Institutions, a $3 million increase.