The Trump administration proposes to cut the National Institute of Standards and Technology’s budget by a third and reorient its research portfolio toward supporting “Industries of the Future,” including through a “grand challenge” initiative to build out quantum networking capabilities. 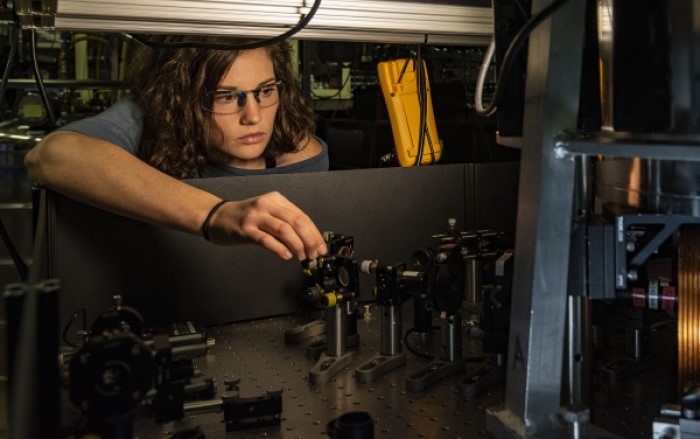 The Trump administration’s latest budget request for the National Institute of Standards and Technology seeks $738 million for the agency, a 29% cut from the currently enacted level. As in previous years, the steepest cuts fall on facility construction and industry services, with the Manufacturing Extension Partnership program once again targeted for elimination.

To date, Congress has rejected the administration’s proposed cuts to NIST, instead increasing the agency’s overall budget by 7% since fiscal year 2016 to just over $1 billion. For summary figures from the request and previous appropriations cycles, see FYI’s Federal Science Budget Tracker.

The account that funds NIST’s core research programs would drop 14% to $652 million under the request. NIST estimates such a cut would require eliminating about 350 staff positions from its scientific workforce. Within the reduced budget, NIST states it will prioritize research connected to the administration’s “Industries of the Future” rubric, which includes quantum information science (QIS), artificial intelligence, advanced communications, advanced manufacturing, and biotechnology.

Nonetheless, some of these areas would still see cuts under the proposed budget. For instance, to accommodate a 31% cut to its advanced manufacturing and material measurement portfolio, NIST states it would halt work on “materials issues relevant to energy and environmental applications” and pare back research on materials reliability testing.

Quantum information science. The budget includes $40 million for QIS research, level with the amount Congress specified for fiscal year 2020. NIST states in the coming year it will focus on a “grand challenge” initiative for quantum networking, exploring methods of securely transmitting quantum information between multiple quantum devices and sensors. According to a recent presentation by the director of NIST’s Physical Measurement Lab, the initiative will entail developing local “testbeds” and determining specifications for “plug-and-play” network components.

The QIS funds would also support NIST’s nascent Quantum Economic Development Consortium and existing research institutes at the University of Colorado Boulder and the University of Maryland. In prioritizing QIS and the associated NIST-on-a-Chip program, NIST states it would discontinue or pare back several measurement services, such as its stewardship of an atomic spectra database.

Artificial intelligence. The budget requests a $27 million increase for a “Measurement Tools and Testbeds to Power the Industries of the Future” initiative, of which $25 million would be for accelerating the adoption of AI technologies. NIST states these funds would go toward producing “datasets and use cases to supercharge efforts for new AI systems across a range of application areas, from advanced materials discovery to manufacturing robotics and wireless spectrum management.”

5G and PNT. The remainder of the new funds for the Industries of the Future initiative would go toward developing standards for 5G technologies and increasing the resilience of Position, Navigation, and Timing (PNT) services, in accord with a recent executive order. NIST states it will help develop “PNT profiles,” which the executive order defines as descriptors of how to responsibly use specific PNT services and mitigate potential disruptions.

User facilities. To accommodate a $5 million cut to its $54 million budget for user facilities, NIST proposes to cease operating several instruments at its Center for Neutron Research, reduce reactor maintenance funding, and halt planning for a replacement reactor. NIST estimates these adjustments would reduce the annual number of facility users by 200 and increase the potential for unplanned reactor shutdowns, which it notes cost $140,000 per day on average.

Infrastructure resilience. As a part of a broader deemphasis on environmental programs, the budget for NIST’s physical infrastructure and resilience portfolio would drop 28% to $43 million. NIST states it would halt work on energy efficiency in buildings, including the Net-Zero Energy Residential Test Facility, and end funding for disaster resilience research grants.

The administration proposes to halve the budget for research facilities construction to $60 million, of which $41 million would go to the Safety, Capacity, Maintenance and Major Repairs (SCMMR) account. In the face of this cut, the budget narrative depicts NIST’s laboratory infrastructure as in a dire state due to years of underfunding for facilities maintenance.

“Numerous major utility infrastructure systems are currently in critical condition, creating risks of catastrophic failure of entire laboratory buildings,” it states, citing pressing issues with water and electrical systems at its campuses in Maryland and Colorado. To address the backlog of maintenance, it suggests an annual funding level in the range of $115 million to $144 million would be appropriate for the SCMMR account.

For the second year, the administration also proposes that renovations of the main building on NIST’s Colorado campus be funded through a new Federal Capital Revolving Fund administered by the General Services Administration. The fund would cover the estimated total project cost of $294 million in the first year, which NIST would then repay over 15 years through funds from its own facility construction account. Details on the proposal are available in GSA’s budget request.

For the fourth year in a row, the administration proposes to zero out funding for the Manufacturing Extension Partnership program, which provides technical assistance to U.S. manufacturing businesses. Congress has consistently defended the program, expanding its budget from $130 million to $146 million since President Trump took office.