The U.S. Geological Survey’s budget would drop 24% to $971 million under the Trump administration’s request for fiscal year 2021, with only the Energy and Mineral Resources mission area spared from cuts. The administration also repeats its proposal to restructure the agency's seven science mission areas.

President Trump’s fiscal year 2021 budget request for the U.S. Geological Survey seeks a 24% cut to the agency’s current enacted budget of $1.27 billion. In line with previous requests, the steepest cuts are once again aimed at mission areas related to ecosystems and climate science, while those focused on natural hazards preparedness and water monitoring would see smaller decreases. Only the Energy and Mineral Resources mission area would see a marginal increase, consistent with the administration’s priorities in previous years.

Figures for each mission area and selected programs are available in FYI’s Federal Science Budget Tracker. 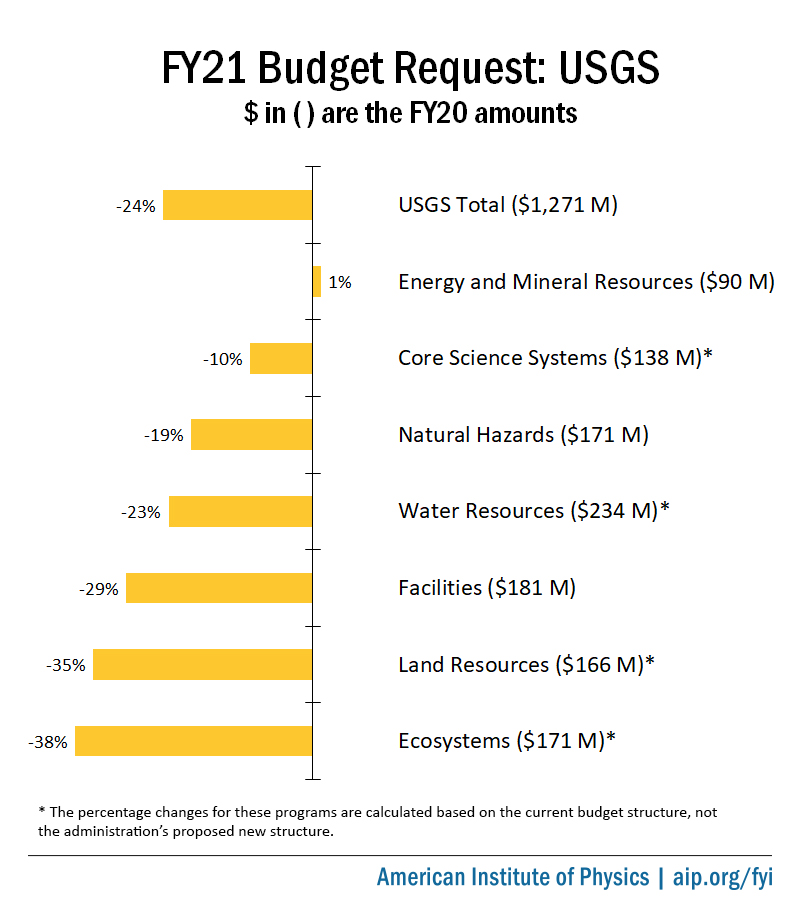 The budget justification states the restructuring would “ensure that programs of related focus and practice are managed within the same mission area,” and that reducing the number of mission areas “aligns with government-wide goals to improve efficiency and utilize resources and expertise that is readily available.” USGS Director Jim Reilly told Congress this month that the restructuring is a “very important priority.”

In the last budget cycle, Congress ultimately concluded that although consolidating the mission areas might improve efficiency, “more information is necessary in order to properly evaluate if any budget restructure would achieve that goal.” It also stated that appropriators “stand ready” to work with USGS on a more detailed proposal, indicating Congress has not closed the door on the idea.

A new element in this year’s request is a proposal to create a chief scientist position that would advise the USGS director on projects crossing mission areas and liaise with other agencies on scientific matters.

Under the request, climate research and land imaging programs currently in the Land Resources mission area would be moved into other mission areas.

Climate science centers. Funding for the Climate Adaptation Science Centers program would drop 74% to $10 million under the current structure and they would be moved into the Ecosystems mission area. When the administration sought $13 million for the centers last year, Congress instead increased their budget by 50% to $38 million, of which $4 million went toward creating a new center in the Midwest. USGS now proposes to defund the new center as part of its proposed cut.

Land imaging. The request proposes to merge the National Land Imaging Program into the Core Systems Science mission area, which houses other geospatial and geological mapping programs. Under the original structure, funding for the program would drop from $99 million to $80 million. USGS states it will prioritize development of the ground control system for Landsat 9, a flagship land imaging satellite scheduled for launch in March 2021. 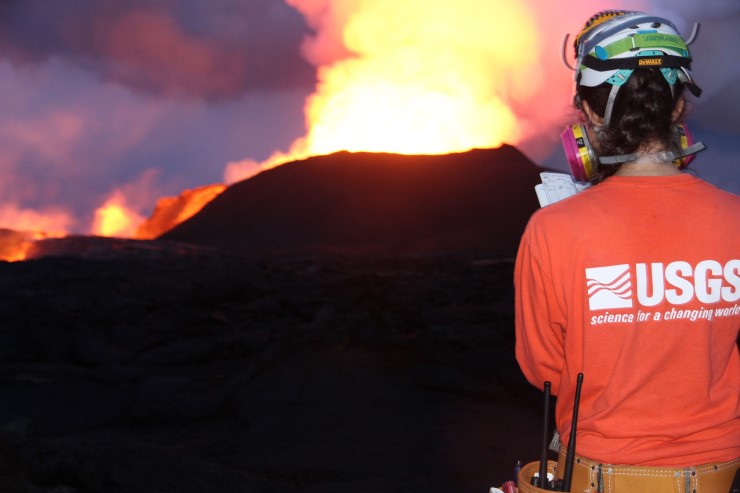 A USGS geologist from the Hawaiian Volcano Observatory monitors the 2018 eruption of Mount Kilauea.

Under the proposal, the Natural Hazards mission area budget would drop 20% to $138 million, with cuts spread across programs that support activities to increase preparedness for earthquakes, volcanic eruptions, landslides, and marine hazards.

Earthquake hazards. The overall budget for USGS earthquake monitoring and early warning programs would drop from $85 million to $60 million, rolling it back to its fiscal year 2015 level. Work to build out an earthquake early warning system for the West Coast would bear the brunt of the cut, falling from $26 million to $8 million, though USGS would continue operating the recently launched ShakeAlert system.

Volcano hazards. Funding for the Volcano Hazards program, which supports five volcano observatories across the U.S., would drop from $30 million to $28 million. Most of the decrease stems from a proposed reduction in the budget for acquiring next-generation lahar detection systems from $4 million to $2 million. The agency plans to continue development and testing of a lahar detection system on Mt. Rainier in Washington and to repair and replace equipment damaged by the 2018 eruption of Mount Kilauea in Hawaii. Congress provided funds for the repairs through a separate account in fiscal year 2020.

Geomagnetic hazards. The administration requests level funding of $4 million for the Geomagnetism program, which Congress doubled last year to launch a three year campaign to complete a magnetotelluric survey of the U.S. USGS explains that such data supports mineral resource assessments and is important for understanding the potential impacts of space weather, which can induce damaging electromagnetic currents at the Earth’s surface.

Coastal hazards. The Coastal/Marine Hazards and Resources program would see its budget drop from $41 million to $37 million. USGS states it plans to prioritize work that supports hurricane preparedness, forecasting of hazards connected to coastal erosion and sea level rise, and implementation of President Trump’s executive order to increase the domestic supply of critical minerals.

Critical minerals initiative. Funding for the Mineral Resources program would increase by 1% to $61 million, with just over half allocated to activities related to critical minerals. Of this amount, the administration requests level funding of $10.6 million for the Earth Mapping Resources Initiative (Earth MRI), which is surveying regions of the U.S. thought to harbor large amounts of critical minerals. USGS states that only 20% of the U.S. land area currently is mapped at a level of detail sufficient to support “mineral and energy exploration or land use planning.”

As an example of one such initiative, USGS highlights its Next Generation Water Observing System, which aims to provide a “dense network of high-fidelity, real-time data on water quantity, quality, and use necessary to support advanced models, modern water predictions, and decision support for daily water operations or water emergencies.” USGS began piloting the project in the Delaware River Basin in 2018 and plans to extend it to the headwaters of the upper Colorado and Gunnison River Basin in 2021.