The Department of Energy and National Science Foundation are investing over $1 billion in dozens of new research centers designed to foster collaborative research aligned with top U.S. R&D priorities. 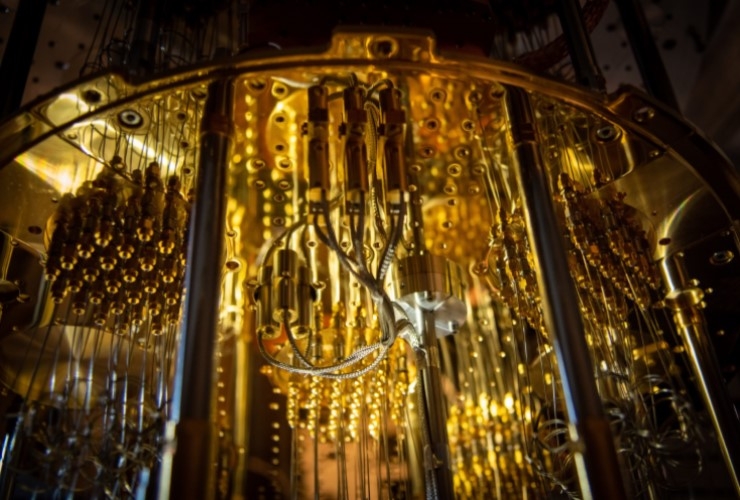 The dilution refrigerator of a quantum computer.

Over the summer, the National Science Foundation and Department of Energy announced funding for dozens of new research centers, with awards ranging from around $10 million to more than $100 million spanning over four to six years. The agencies fund such efforts to build up multi-institutional collaborations and support specialized research infrastructure that is not feasible under smaller, single-investigator grants.

Some of the centers are the first to be launched through new programs dedicated to quantum information science (QIS) and artificial intelligence, reflecting congressional and Trump administration research priorities. Both NSF and DOE also made new awards under existing center programs focused on physics, engineering, materials research, and energy innovation.

More than $1 billion planned for QIS and AI centers

The National Quantum Initiative Act of 2018 requires NSF and DOE to each fund up to five QIS research centers. In July, NSF announced it will evenly divide $75 million over five years among its first three centers, called Quantum Leap Challenge Institutes, which together will support partnerships between 16 core academic institutions, 22 companies, and eight national labs:

DOE announced its five QIS research centers in August, each receiving $115 million over five years, with commitments for additional funding from dozens of universities and companies totaling $340 million altogether. Each center will be managed by a DOE national lab:

Legislation is now pending in Congress that would establish an initiative for AI similar to the National Quantum Initiative, charging NSF with establishing a national network of research centers. NSF has already moved in that direction, announcing in August it is funding five new institutes at $20 million each over five years:

NSF plans to establish around eight more institutes funded at $160 million overall, this time with support from corporate partners including Accenture, Amazon, Google, and Intel. It is also working to build a broader network of AI research and education centers with participation from the Departments of Agriculture, Homeland Security, and Transportation. The Department of Agriculture announced its first two centers in August, focused on next-generation food systems and sustainability.

NSF also issued awards over the summer through its established center programs.

In August, NSF announced four new awards under its Engineering Research Centers program, which has funded 75 centers since its inception in 1985. The new centers will together receive $104 million over five years:

The agency has supported 17 Physics Frontier Centers since 2001, of which 11 are currently active.

The MRSEC program was founded in 1994 and now supports 19 centers in all.

The Fuels From Sunlight Energy Innovation Hub created at Caltech in 2010 to advance research in artificial photosynthesis is now sunsetting, making way for two new hubs:

DOE also announced it is awarding $100 million over four years to a cohort of 10 EFRCs, including six new centers:

Since DOE launched the program in 2009, it has supported 82 EFRCs.