The Arecibo telescope has been battered in recent years by tight budgets, poor morale, natural disasters, and now broken cables. Engineers have determined it is unsafe to repair.

This article is adapted from a Nov. 24 post by Physics Today, which is also published by the American Institute of Physics. 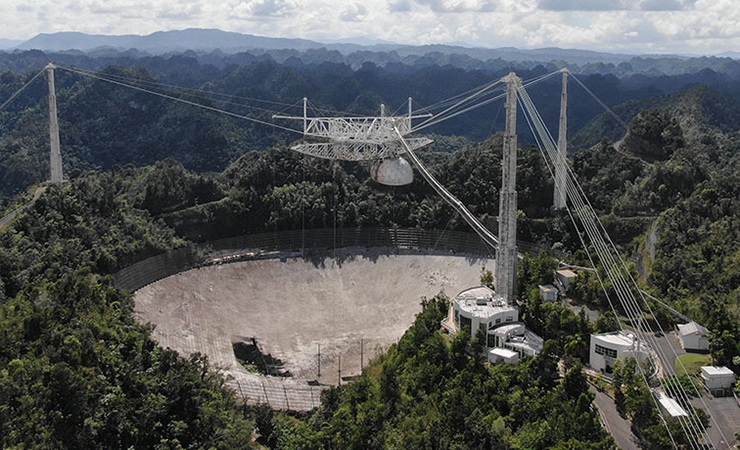 On Aug. 10, a cable at the Arecibo radio telescope in Puerto Rico popped out of its socket and whipped down to gouge a huge hole in the facility's 305 meter dish. Studies were launched to understand why the cable failed, and a replacement cable was due to arrive in December. Then, on Nov. 6 another cable snapped, precipitating an about-face: Arecibo’s owner, the National Science Foundation, announced on Nov. 19 that the telescope will be decommissioned.

That decision closes the facility, which has been the world’s largest eye on the sky throughout its 57 year history. (Although physically larger, China’s new Five-Hundred-Meter Aperture Spherical Telescope has the same effective aperture at zenith as Arecibo and it samples a narrower range of radio frequencies.) Among the major discoveries at Arecibo were the first binary pulsar, the first exoplanet, and an ionized helium layer in the upper ionosphere. The telescope was part of the NANOGrav project’s search for gravitational waves using pulsars. And it featured in the films Contact and GoldenEye.

Arecibo was also a key part of NASA’s congressionally mandated planetary defense program to detect and monitor near-Earth objects. In a statement on Nov. 19, NASA said its search efforts are “not impacted” by the decommissioning, as the telescope was only used to characterize known objects, which is also done using the Goldstone radar in California.

The Arecibo telescope’s cables support a 900 ton platform and dome housing instrumentation that is suspended 150 meters above the dish. The first to fail was an auxiliary cable that dated to an upgrade completed in 1996. The second was a main cable from the original telescope construction in 1963; it snapped on a calm day, bearing a load of 647,000 pounds, well below what it was rated for. Since making its decision, NSF has reported that additional wire breakages have been discovered on remaining cables on the same side of the telescope. The causes of the failures are unknown. According to NSF and the University of Central Florida (UCF), the lead contractor for the observatory, maintenance and inspections were current.

The reversal from fix-up to finish-off was a matter of safety, Ralph Gaume, director of NSF’s Division of Astronomical Sciences, said during a telephone news conference when the decommissioning was first announced. Several engineering firms had evaluated the site and warned of an “uncontrolled catastrophic collapse” if left untouched, he said. Ashley Zauderer, NSF program director for the Arecibo Observatory, emphasized the decision to decommission is based entirely on “safety and structural stability.” She noted the agency had recently funded a new ultrawide-band receiver for the telescope. Now it has given the green light to plan a controlled deconstruction of the facility.

Robert Kerr, Arecibo director from 2007 to 2008 and from 2011 to 2015, says he “takes the engineers and the NSF at their word that the best option is to decommission the telescope.” He attributes the failures to natural aging and a confluence of external events — a magnitude 6.4 earthquake in 2014, Hurricane Maria in 2017, and a series of temblors in late 2019. In addition, the 1996 upgrade increased the platform weight. He says the telescope was “as well maintained as a steel platform in the tropics can be.”

But John Mathews, an emeritus professor at the Pennsylvania State University who visited and used Arecibo regularly from 1969 through 2019, says that “deferred maintenance has been a problem for decades, and it’s only gotten worse.” He points to visible corrosion of dish components and sagging smaller cables. Those are external features, he admits, “but many of us suspected that the structure was compromised.” He adds that “the ship was sinking, and the people who could get jobs elsewhere wisely did so” after the transition to the current UCF-led management team in 2018.

In conversations with Physics Today, many Arecibo users and employees suggested that morale among employees was as frayed as the cables that broke, and some requested anonymity for fear of retaliation. “The family atmosphere is totally gone,” says one. The people working there have different benefits, depending on which of three entities in the management consortium employs them. Some people took pay cuts, he says, and some do not have retirement packages.

A scientist who left recently asserts that some observing time was awarded based on friendships rather than merit. “I was a loud voice against stupid decisions and the toxic environment that my colleagues and I faced since UCF took over managing the observatory,” she says. “Finding friends and colleagues crying on the stairs became routine.”

Kerr suggests that Arecibo has been headed toward decommissioning since the 2005 NSF senior review of astronomy facilities, in which the agency was looking to free up funds for the Atacama Large Millimeter Array and other new endeavors. “It’s been a battle between the communities who love Arecibo and NSF,” says Kerr.

Since the review, management has changed twice — first moving in 2011 from longtime manager Cornell University to a consortium led by SRI International, and then in 2018 to the current management team. The managers were charged with finding new sources of funding as NSF began reducing its contribution to the observatory’s annual $12 million budget, from roughly $8 million in 2018 to about $2 million in 2023.

Aside from its scientific contributions, Arecibo was an economic driver and educational hub for Puerto Rico. Nearly every schoolchild on the island visits the site. And the observatory is credited with inspiring many Puerto Ricans to go into STEM fields; the University of Puerto Rico at Mayagüez graduates the most Hispanic engineers and the second largest number of women engineers of any U.S. university, according to the Puerto Rico government’s website.

Many members of the observatory staff have worked at Arecibo for decades, notes Kerr. The closure will have a huge impact on the community. More than 100 people are employed at the observatory. “I think of the guys who work on the platform,” he says. “They do it all — adjust and hoist instruments, maintain the platform. They make about $45,000 a year, astonishingly little given the risk involved in their job.”

Gaume stressed that, while the radio telescope will be decommissioned, the observatory’s visitor center and lidar facility, and a set of instruments that measure winds, temperatures, and structures in the ionosphere at a separate site about 160 kilometers east on the island of Culebra, will be preserved. But the visitor center is likely to be less of a draw if people look at a sinkhole rather than a telescope dish. And, Kerr says, in terms of the money and scientific productivity, those facilities are “in the noise” rather than the signal.