The National Science Foundation is insisting that new discipline-specific emphasis areas included in its latest solicitation for the Graduate Research Fellowship Program will not change the way the agency reviews applications. 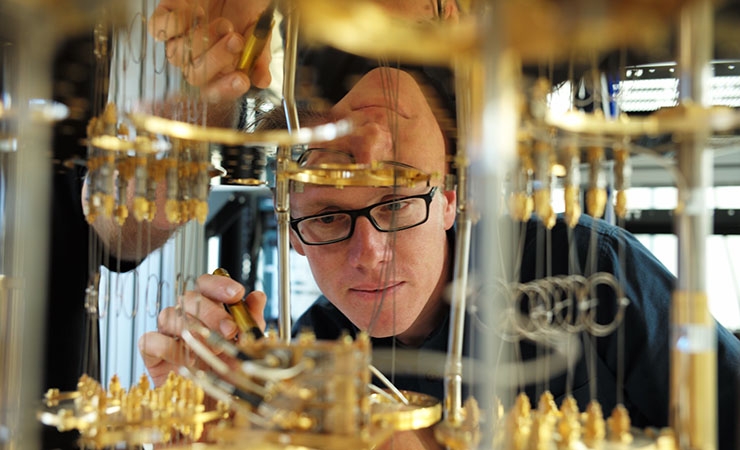 A scientist inspects the dilution refrigerator of a quantum computer.

The National Science Foundation is trying to quell concerns about its latest solicitation of applications for the Graduate Research Fellowship Program (GRFP), which announced the agency will “emphasize” the fields of artificial intelligence, quantum information science, and computationally intensive research.

The solicitation triggered a wave of comments on Twitter seeking details on how the new emphasis areas might impact award selection. Many also raised concerns that favoring certain kinds of research could lead to a less diverse group of fellows and detract from the fellowship’s goal of supporting outstanding talent rather than particular fields.

Responding to the backlash, NSF has stressed it continues to encourage applications across all disciplines and that the review process for the fellowship is not changing.

The GRFP was created shortly after NSF’s establishment in 1950 and is among the most prestigious federal science fellowship programs, supporting more than 50,000 fellows to date. The scope of the program is set by a list of fields of study included in the solicitation, encompassing all areas of research the agency funds.

To clarify the new solicitation language, NSF issued a statement on July 28 explaining it reflects a “move to align with a coordinated federal strategy to secure America’s position as a global leader in research and innovation in artificial intelligence, quantum information science, and other emergent areas.” The agency also maintains the move is “not unusual,” noting it has “previously underscored agency-wide areas of emphasis while continuing to support a broad range of research.”

However, the statement did not end the controversy. An open letter posted on July 30 by Jason Williams of the Cold Spring Harbor Laboratory that now has more than 800 signatories argues the new solicitation “sends a clearly exclusionary message and potentially adds to the problems noted in the 2014 evaluation of the GRFP (79.9% of fellows are white).”

Noting that students from underrepresented groups have “differential access and exposure” to the priority fields, the letter adds, “While we fully believe in the importance of computationally driven technologies in the sciences, bringing this emphasis into the GRFP amplifies the digital divide.” It states that only changing the solicitation text would address their concerns.

A separate petition calling on NSF to remove the emphasis areas has garnered more than 3,500 signatories. Written by Chelsea Catania, a past GRFP awardee, it suggests NSF instead advance the priorities through research grants and preserve the discipline-agnostic character of the program, exhorting, “Fund people, not projects!”

In a statement to Nature for an article published on Aug. 6, NSF stressed its commitment to increasing diversity in STEM fields and offered a further clarification on the solicitation, stating it is “simply signifying that these are areas of national importance and we are encouraging students to apply.” Asked by FYI whether this means that applications that incorporate one of the priority areas will not receive more weight in the review process, a spokesperson for NSF replied,

Every year there are multiple factors that are taken into consideration when developing the solicitation and selecting awardees. As previously stated, these are only areas of emphasis — they will not change the review or selection process. GRFP will continue to fund fellows in all areas of science and engineering supported by NSF and as always NSF will make decisions based on the peer review process.

This is the first time in its history that the program has emphasized specific disciplines among the full list of eligible fields, according to Gisele Muller-Parker, who managed the GRFP from 2008 to 2018. Now retired from NSF, she told FYI that while the agency has modified the eligible fields of study over time, the previous changes were largely done to modernize the disciplinary taxonomy.

She explained that the number of graduate students supported by the GRFP is small relative to the number supported as research assistants on NSF grants held by principal investigators, who select from students at their own institutions. “So, the big issue is that the fellowship is one of the few mechanisms where students are really in ownership of their own practice,” she remarked.

Muller-Parker said she views the potential impact of the change on fellow diversity as a valid concern, remarking, “Looking at the tweets I was like, ‘I'm so proud of the fellows, that they're saying the right things.’” She noted she has previously advocated for NSF to publish data on application success rates across fields and demographic groups as a way of increasing the transparency and accountability of the fellowship program as well as informing outreach to underrepresented groups and institutions.

Amid the pushback on NSF, some have welcomed the emphasis areas. University of Maine President Joan Ferrini-Mundy, who from 2011 to 2017 led the NSF directorate that administers the GRFP, told FYI, “I find it actually quite refreshing that NSF would call out three areas that are clearly coming areas, growing areas, areas where attention is needed. They have some interdisciplinarity connected to them, which means that they would help cross boundaries, a big focus for science going into the future.”

Ferrini-Mundy said there is precedent for the agency using its student programs to drive growth in particular areas, pointing to how the NSF Research Traineeship program has set disciplinary priorities. At the same time, she doubted NSF would take a rigid approach in the GRFP, remarking, “In my time, there wasn't a program that attached specific numbers to specific fields or anything like that at all.”

She also noted that the GRFP added STEM education and learning research to the list of eligible fields in 2010 as a way of encouraging more applications in that area. Referring to the new emphasis areas, she added, “I've talked to colleagues here on campus who feel that it's good leadership for NSF to say, ‘here's where we would like to be sure we let people know that these are eligible areas.’”

Though the new solicitation text came as a surprise to many, over the past two years NSF and the Trump administration have outlined plans to emphasize particular fields within the GRFP.

In 2019, NSF’s budget request stated the program would “continue to align awards with NSF research priorities such as big data, artificial intelligence, quantum information science, and NSF’s 10 Big Ideas.” And in this year’s budget request, NSF similarly indicated it would “continue to align [GRFP] awards with NSF and administration research priorities, including AI, QIS, and other industries of the future.”

The Trump administration has placed a particular focus on AI, and in a February 2019 executive order it instructed NSF and other agencies to “consider AI as a priority area within existing federal fellowship and service programs.” The GRFP is listed as one such program on the White House’s American AI Initiative website. A progress report on the initiative released late last year also states that NSF “began prioritizing computational and data-enabled science and engineering in 2018 in a subset of awardees of its Graduate Research Fellowships Program.”

The President’s Council of Advisors on Science and Technology has also identified the program as a means for building up the AI workforce, proposing that NSF receive funding sufficient to offer GRFP awards to all computer science undergraduates who earn GPAs above a certain threshold.

The administration has not issued an analogous executive order for QIS, though the National Quantum Initiative Act enacted in 2018 does instruct NSF to use its existing education programs to “increase participation in the quantum fields.” The act also authorizes NSF to establish a program to provide traineeships to U.S. citizens who pursue master’s or doctoral degrees in QIS. Among the latest actions taken as part of the National Quantum Initiative, the White House and NSF just launched a National Q-12 Education Partnership to introduce students to the subject at early grade levels.