The latest decadal survey for the National Science Foundation’s Earth Sciences Division recommends it undertake a number of infrastructure initiatives, while warning many may not be tractable if the division’s decade-long trend of stagnant budgets continues. 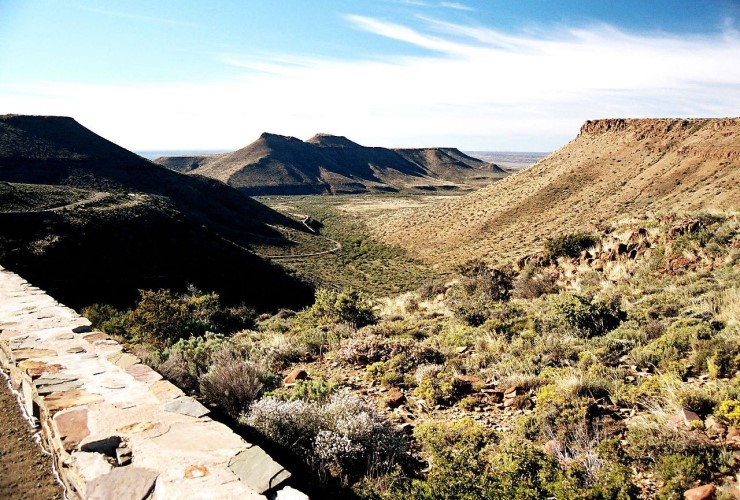 The Great Escarpment in Karoo National Park, South Africa, the site of an NSF-funded study on a past mass extinction event that could improve understanding of the potential effects of modern climate shifts.

The National Academies released a decadal survey for the National Science Foundation’s Earth Sciences Division (EAR) last week, recommending priorities for research, infrastructure, and workforce training for the coming decade. The survey was produced over a year-and-a-half period by a committee chaired by James Yoder, dean emeritus of the Woods Hole Oceanographic Institution.

NSF charged the committee with identifying a set of “high-priority scientific questions” the division should pursue and the associated physical and cyber infrastructure needed to address them. The committee was instructed to assume a constant budget while also considering potential adjustments that could be made in view of funding increases or cuts.

Presenting 12 such questions, which range from understanding how to reduce geohazard risks to reconsidering the fundamental nature of earthquakes, the committee emphasizes that executing its research vision will entail infrastructure investments that well outstrip the division’s current annual budget.

The committee notes that EAR’s budget has remained flat at about $180 million for the past decade and has declined in inflation-adjusted terms. For comparison, it observes the current budget for NSF’s Division of Atmospheric and Geospace Sciences is about $300 million, and though that division devotes about the same amount as EAR to research grants, it has a significantly higher infrastructure budget. Currently, EAR spends about a third of its annual budget on infrastructure, supporting 30 multi-user research facilities offering capabilities that span geophysics, materials characterization, geochemistry, and continental drilling. 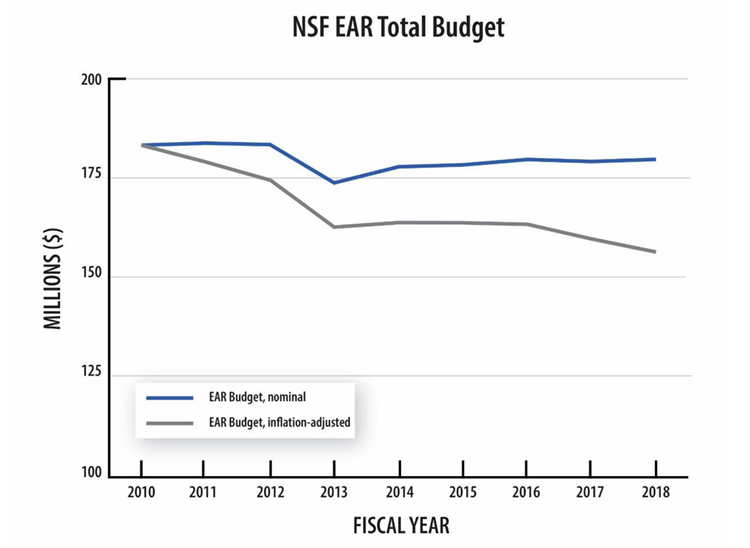 The committee states it will be “extremely challenging” to pursue new infrastructure projects if the current budget trend continues, arguing they “cannot be developed at the expense of EAR’s core disciplinary research programs.”

With that caveat, the committee recommends EAR continue to support community planning for several ambitious projects, such as a Continental Critical Zone initiative that would produce extensive maps of a subsurface layer that is key to understanding landscape evolution, hazard prediction, and land-climate interactions. It notes that, while the project could cost more than $100 million and take decades to complete, a pilot version could be initiated at a cost of about $5 million over five years. Another recommended initiative known as SZ4D would study subduction zones to improve understanding of earthquakes, tsunamis, and volcanic eruptions, with a potential price tag running into the hundreds of millions of dollars.

The committee states that implementing these projects under the current budget would require sunsetting existing programs or obtaining support from new sources of funds, such as NSF’s agency-wide research infrastructure programs. For the nearer term, the committee recommends EAR move ahead with funding three smaller project ideas that have longstanding support within the research community: a near-surface geophysics center, a U.S.-based very large multi-anvil press user facility, and a national consortium for geochronology.

According to the committee, the geophysics center would cost about $6 million over four years and support research, data acquisition, and training, helping the community to “stay abreast of changing technology.” The anvil facility would provide expanded capabilities for quantifying the physical and mechanical properties of rocks, with startup costs of between $2 million and $3 million. The consortium would aim to address longstanding challenges in disseminating geochronologic information across the research community and supporting lab operations.

Concerning the consortium, the committee explains, “Issues arise principally from the current funding model, in which most geochronology labs are supported mainly by awards to address specific science questions, with little or no funding awarded to support lab infrastructure, technique development, or educational/outreach activities.” Envisioned as a network of multi-user facilities and single-investigator labs, the consortium is estimated to cost $8 million to $10 million annually. Together, these facilities would develop improved rock dating techniques and commit to using Findable, Accessible, Interoperable, Reusable (FAIR) data principles for chronometers. They would also help train “a new generation of highly diverse, cyber-savvy geochronologists.”

The committee frames the present as an “all-hands-on-deck moment” for Earth science, offering an urgent opportunity to “make society better prepared to meet the challenges of a changing Earth.”

Elaborating on this phrase at a May 19 webinar on the report, University of Wisconsin–Madison geoscientist Andrea Dutton said it “comes from the recognition of the societal relevance that runs through many of the science priority questions.” For instance, several of them focus on how the discipline can inform pressing concerns over climate change.

Dutton added that the phrase reflects how addressing the questions will require increasingly interdisciplinary approaches. “Realizing this vision is going to depend on scientists who are intellectually and demographically diverse, who are individual investigators, as well as those participating in larger research groups and teams and networks, and also those who have expertise in analytical, computational and field-based methods,” she said.

In the report, the committee laments that Earth science “remains one of the least diverse STEM fields,” with little improvement over the past 40 years. It continues, “Going forward, diversity and inclusion must be thought of in the broadest terms to address systematic barriers to opportunity,” encompassing aspects beyond race and gender such as gender identity, parental status, age, ability, citizenship status, and veteran status, among other protected characteristics.

While noting it was beyond the scope of the report to recommend specific actions on this front, the committee adds “it is clear that the goal of improving diversity needs to rise higher as a priority in order to achieve a cultural shift where the burden of doing so does not rest disproportionately on those within underrepresented groups.”

Correction: This article was updated to reflect that EAR supports continental drilling, not ocean drilling.