With a series of high-priority projects now in progress, a new report urges the Department of Energy’s High Energy Physics program to start shifting funding back to researchers and to accelerator and detector R&D. 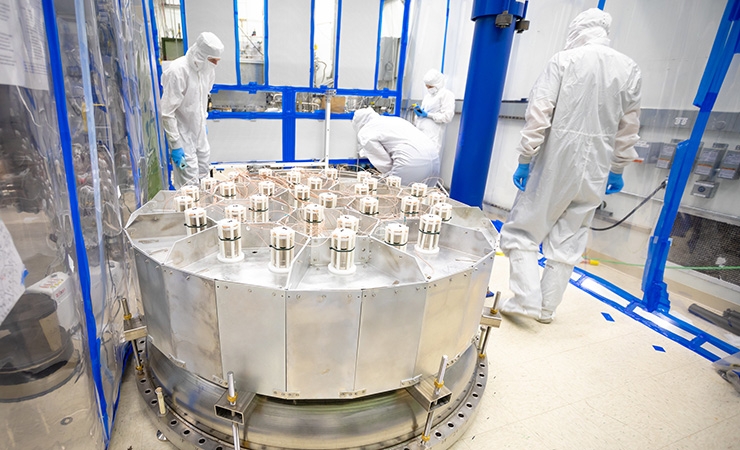 At its meeting this month, the U.S. High Energy Physics Advisory Panel (HEPAP) approved an external review of research programs administered by the Department of Energy’s HEP program. While DOE has not yet posted the review committee’s report, the key findings and recommendations were presented to the panel by Cornell University physicist Ritchie Patterson, who chaired the effort.

Patterson said the committee’s number one recommendation is to restore higher funding levels for experimental and theoretical research and for accelerator and detector R&D. In recent years, DOE has had to cut its budget for these activities as spending has increased on an array of major projects recommended by the landmark 2014 Particle Physics Project Prioritization Panel (P5) report. An earlier review flagged this issue as a concern in 2016, and the situation has only become more pronounced in the last four years.

Going forward, some funding will be freed up as projects in progress continue to be completed. However, work is just starting to ramp up on the HEP program’s flagship project, the Long-Baseline Neutrino Facility and Deep Underground Neutrino Experiment (LBNF/DUNE). DOE’s estimated price tag for the project leapt by 40% to $2.6 billion last year, and the meeting also included an update on efforts to control its costs by securing additional international contributions.

Just six years ago, when the P5 report was released, U.S. funding for HEP facilities and major experiments had reached a low ebb. That trend reversed in the report’s wake and now nearly all the projects it recommended have progressed, particularly in the past several years as Congress increased the annual HEP budget from less than $800 million to more than $1 billion.

In her presentation, Patterson said the review committee regards the shift toward project funding as “appropriate” and found the research community strongly supports it. However, when the P5 set out its project recommendations, it sought to craft a balanced agenda that would keep funding for research and technology consistently above 40% of the total HEP budget. Now, the actual percentage has dipped significantly below that threshold.

Patterson noted that, even without adjusting for inflation, funding for core research and technology programs declined between fiscal years 2014 and 2020 from $361 million to $316 million, or a little more than 30% of the HEP budget. These figures exclude small business grant programs as well as nearly $50 million now being spent on new efforts in quantum information science (QIS) and artificial intelligence and machine learning (AI/ML), which were not considered by the P5. But even adding those amounts, research and technology spending represents only 37% of the budget.

Given this situation, the review recommends DOE provide a plan to HEPAP in the next year for returning research and technology efforts to their pre-2014 levels, warning,

The ability of the university and laboratory groups to design and build, operate and analyze, and theoretically interpret the experimental data is at risk, and the accelerator and detector R&D needed to enable the next generation of experiments has been sharply curtailed. If allowed to continue, the consequences will become severe at a time when the research and technology program is increasingly central to realizing the P5 program.

Following Patterson’s presentation, Caltech physicist Mark Wise asked if it is possible to identify a root cause of the imbalance and if it implies the next P5 should recommend fewer projects. DOE official Glen Crawford opined that it was the strength and ambition of the P5’s vision that attracted funding from Congress for its full list of projects. “We are in some sense victims of our own success,” he remarked.

Among the specific areas the review committee feels are suffering from reduced funding is accelerator R&D. The review observes that in the past the program has produced “revolutionary developments,” highlighting the leap in cavity cryogenic performance that enabled major upgrade projects for accelerators at Fermilab and SLAC. It suggests efforts have now “weakened to the point where another revolution is unlikely,” and that other countries are challenging U.S. leadership in the field.

In detector R&D, the review praises work to advance P5 projects despite declining budgets. Noting that work on detectors is concentrated in national labs, it recommends developing a more “substantial role” for universities and urges a “sharp pivot toward non-directed, more blue-sky, potentially transformative R&D.”

Within HEP’s research programs, the review warns that as operations and upgrades at CERN’s Large Hadron Collider have absorbed more funding, only “scant” resources are available for simulation and detector design efforts that pave the way for future high-energy colliders. It also notes that while funding has been flat for neutrino physics, increased effort will soon be needed on LBNF/DUNE.

Although a number of research areas are facing squeezes, the review finds others are thriving. It commends DOE’s particle cosmology program, stating it is “clearly world leading,” and supports ramping up its next major project, the Cosmic Microwave Background Stage 4 experiment. The review also approves of HEP’s growing efforts in QIS and AI/ML and recommends they be further integrated with the core research and technology program.

More generally, the review states the committee was impressed with the HEP program’s management, finding it has maintained a high-quality portfolio. The review credits the program’s adherence to P5 guidance and increased engagement with the research community, such as by hosting a series of “Basic Research Needs” workshops.

However, the review does recommend DOE establish a new mechanism for obtaining community input as it adapts the P5 strategy to changed circumstances. As examples of such changes, it cites shifts in the budgetary environment, increases in project costs, and evolutions in the “international landscape” that affect the prospects for multinational projects.

At the moment, DOE is struggling with cost increases and shortfalls in international contributions as it pushes LBNF/DUNE toward its next managerial milestone, known as critical decision 2. A year ago, the project was expected to clear that hurdle during the present quarter, but Fermilab’s Chris Mossey, who leads the U.S. portion of the international effort, reported to HEPAP that the aim is now to do so in late 2021 or early 2022.

To pass the milestone, projects must establish a firm baseline cost and schedule. One problem LBNF/DUNE has faced is higher-than-expected costs to excavate caverns for the project’s neutrino detector modules at the Sanford Underground Research Facility in South Dakota. Mossey said those costs have now been stabilized following the recent award of a firm-fixed-price contract for the excavation. He said the cavern is expected to be ready for the start of detector installation in 2024.

A thornier issue concerns construction of the detector modules themselves, which is being led by an international team with DOE as a contributor. Because international contributions have not been secured for much of the module work, and because DOE cannot approve a baseline plan with unsecured commitments, the department has provisionally assumed responsibility for some of the missing contributions as contingency costs. However, if the contingency budget pushes the overall budget too high, DOE rules would demand the entire project be reevaluated.

Accordingly, the department is planning to reduce the number of modules included in the baseline plan. Mossey said the present aim is to include two modules, though the site will be built to eventually accommodate the originally planned four. He said that to put a second module onto the contingency budget, the department still needs partners to commit to contributing components such as the module’s cryostat, and he reported that “active discussions” are underway with CERN and European science agencies toward that end.