The U.S.-based neutrino project LBNF/DUNE may reduce its initial planned capabilities as part of an effort to mitigate construction cost increases and shortfalls in contributions from international partners. 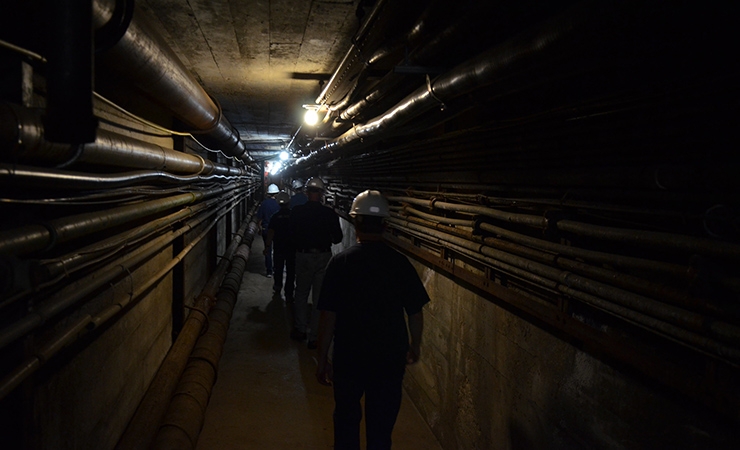 A tunnel at the Sanford Underground Research Facility.

As the Long-Baseline Neutrino Facility and Deep Underground Neutrino Experiment (LBNF/DUNE) moves toward its next management milestone, known as CD-2, project leaders are considering reducing its initial capabilities to stay under a cost limit that would trigger a reevaluation of its CD-1 approval. While the move would still allow for the project to achieve its originally envisioned capabilities at a later date, it would mark a setback for the U.S. particle physics community’s most ambitious effort in decades.

Currently in its planning and early construction stages, LBNF/DUNE represents a bid to cement the U.S. position as a world leader in experimental neutrino physics. By analyzing the elusive particles’ behaviors with unprecedented precision, the project aims to probe the foundations of physics and shed new light on processes that shaped the history of the universe. To meet these goals, the project will install highly sensitive detectors one mile underground at the Sanford Underground Research Facility in South Dakota to observe neutrinos created 800 miles away at Fermilab near Chicago.

In February, though, the Department of Energy’s annual budget request reported that LBNF/DUNE’s anticipated cost to the department had risen 40% over the previous year to $2.6 billion. It explained the new figure resulted from a shortfall in expected contributions from international partners and increased construction costs at Sanford Lab. The new estimate is only provisional, though, and the department is now working to establish the firm cost and schedule baseline needed to advance the project past CD-2 to its next phase.

From its beginnings, LBNF/DUNE has been organized as an international project that is divided, per its name, into two parts. Led by DOE, LBNF encompasses construction of the neutrino beamline and project infrastructure and has a goal of securing a 25% contribution from partners. DUNE, encompassing construction of neutrino detectors at Fermilab and Sanford Lab, is led by an international collaboration with an anticipated 25% DOE contribution.

So far, CERN has already completed work on two prototype neutrino detectors at its Large Hadron Collider facility in Geneva, Switzerland, that are not formally part of LBNF/DUNE, and it will provide a major component for one of the four detector modules planned for the Sanford Lab. The United Kingdom has agreed to provide the target for the project’s neutrino beamline, and the project has also reached agreements to receive major in-kind contributions of equipment from India, Brazil, and Poland.

Additional contributions may well follow. Notably, the European Particle Physics Strategy Update released today states, “Europe, and CERN through the Neutrino Platform, should continue to support long baseline experiments in Japan and the United States. In particular, they should continue to collaborate with the United States and other international partners towards the successful implementation of [LBNF/DUNE].”

Nonetheless, the shortfall in partner contributions continues to present a significant cost risk, which must be accounted for as part of LBNF/DUNE’s baseline cost.

DOE told FYI that the department has added $80 million to its own project costs to cover gaps in partner contributions to date. The department also stated, “Currently, there are no gaps in non-DOE commitments for LBNF to the proposed baseline, but we are still welcoming contributions to further enhance the project. DUNE is an international experiment and will scale the experiment to the resources it is able to muster.”

DUNE co-spokespersons Ed Blucher and Stefan Söldner-Rembold reported to a project advisory panel in April that without additional commitments from international partners and the National Science Foundation, LBNF/DUNE’s current $2.6 billion cost estimate is apt to rise by an additional $300 million. They said such an increase would put the project above a “hard cost cap” of $2.79 billion.

When DOE officially approved LBNF/DUNE’s basic design at its CD-1 milestone in 2015, it set out an expected range of the project's cost to the department of $1.26 billion to $1.86 billion. Should the project’s anticipated baseline cost exceed $2.79 billion, 50% above the range’s upper bound, DOE rules call for CD-1 approval to be revisited.

Blucher and Söldner-Rembold stated that project costs need to remain around $2.6 billion to be considered “comfortably below” the 50% increase limit. They indicated that DOE has consulted with project stakeholders on a strategy to contain LBNF/DUNE’s baseline cost that involves limiting the number and capabilities of the detector modules that need to be installed for the project to be considered “successful.”

Noting DOE has previously funded projects in that way, they also stressed such a plan would allow for later expansions to achieve the project’s originally envisioned capabilities using unexpended contingency funds and new international contributions. 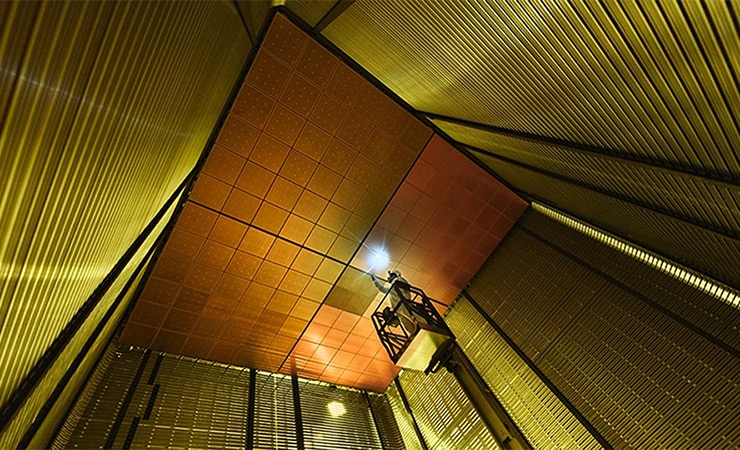 Inside one of the ProtoDUNE detectors at the CERN physics laboratory in Switzerland. The DUNE detector modules in South Dakota will be 20 times as large.

To develop LBNF/DUNE’s baseline cost and schedule, DOE is also firming up the costs of excavating the DUNE detector caverns at Sanford Lab, which is built at the site of a retired gold mine.

Last year, LBNF’s general contractor undertook “pre-excavation” work at the lab that included infrastructure improvements needed to remove about 800,000 tons of rock to create the caverns. In a December presentation, LBNF Project Director Chris Mossey indicated that phase of the project had proceeded on budget and schedule.

However, Mossey also reported the main phase of excavation would face delays and that the previously anticipated date of October 2022 for handing over the first section of the cavern to the project team did “not appear achievable.” He outlined efforts to compress the excavation schedule that were being planned, and DOE reports such measures have since been implemented.

According to DOE, the increases in excavation costs primarily reflect changes made when maturing the design of the DUNE detector facility. It states these changes have contributed to a $300 million overall increase in projected civil construction costs.

The excavation cost is currently also undergoing an independent review that is due to be completed in July. According to Mossey, the project should gain a “definitive” understanding of these costs based on bids received for the excavation subcontract, which is likewise expected to be issued this summer.

DOE told FYI that project delays and associated costs stemming from the COVID-19 pandemic are also under evaluation and will be taken into account in the project baseline.

The ambitious scope and international structure of LBNF/DUNE derive from its status as a marquee project for U.S. high energy physics.

The 2014 Particle Physics Project Prioritization Panel (P5) report recommended construction of a long-baseline neutrino facility as the “highest-priority large project” for the period in which it would be built. Managed by the federal government’s High Energy Physics Advisory Panel, the P5 process has become the key mechanism through which the U.S. high energy physics community forges consensus about its priorities.

The P5 report observed that a smaller detector that had been proposed for the surface near Sanford Lab would have “very limited capabilities,” and that a more sophisticated underground detector would enable research on a wider array of phenomena and achieve more definitive results. Recognizing the scale of effort involved in such a project, it also recommended the project be organized as an international collaboration with Fermilab as host.

In the wake of the 1993 cancellation of the Superconducting Super Collider, an enormous project the U.S. pursued on its own, international partnerships have come to be regarded as critical to advancing large efforts in particle physics. Notably, CERN successfully completed its world-leading 14 teraelectron volt Large Hadron Collider using an international model, and the new European particle physics strategy now recommends that the lab build a highly ambitious 100 teraelectron volt collider by leveraging a “global collaboration.”

Yet, such international partnerships can also make for complicated governance. Aside from its difficulties securing partner contributions, there is evidence LBNF/DUNE has suffered from managerial frictions. An independent review of the project completed last fall made 40 recommendations, which are not public. According to Mossey’s December update, though, they included actions aimed at strengthening “leadership accountability” and establishing “dedicated responsibility” over the DOE and international components of the project.

As of now, the governance of LBNF and DUNE remains split between DOE and the DUNE collaboration. However, Fermilab did reorganize its side of the project in January, which included giving Mossey responsibility over the U.S. portion of DUNE as well as LBNF.

Update: After this bulletin was published minor changes were made to the description of the 2014 P5 report's recommendations to more accurately reflect the report's language.