PCAST Delivers Roadmap to Spur ‘Industries of the Future’

The President’s Council of Advisors on Science and Technology has recommended detailed actions to spur “Industries of the Future,” meet national STEM workforce needs, and better leverage national labs within the U.S. research enterprise. 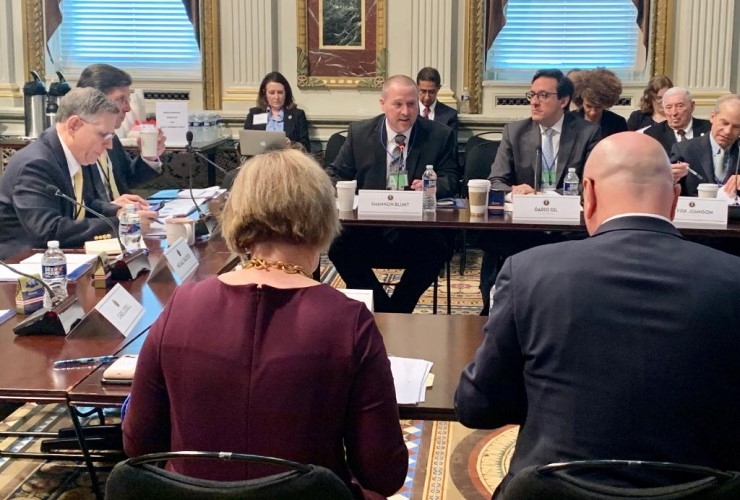 The President’s Council of Advisors on Science and Technology released a report last month recommending ways to accelerate progress in “Industries of the Future” (IoTF), a term the White House uses that encompasses quantum information science, artificial intelligence, advanced manufacturing, advanced communications, and biotechnology. The recommendations focus on targeted funding increases and an array of new mechanisms for facilitating the translation of research into scaled-up applications, bolstering the U.S. STEM workforce, and strengthening federal laboratories’ engagement in the R&D enterprise.

PCAST approved the subcommittees’ recommendations at a meeting on June 30. Promising to follow through on the roadmap, Droegemeier assured the council, “This is not a report that is going to sit on a shelf.”

Among the five Industries of the Future, the report focuses in particular on quantum information science and AI.

The report notes that the Trump administration has proposed to increase annual federal spending on QIS R&D to about $860 million by 2022, and that estimates suggest U.S. industry will spend $2 billion on quantum computing over the next five years. It recommends that the federal government provide $500 million, also over the next five years, to establish “national quantum computing user facilities,” which would function similarly to the high-performance computing facilities supported by the Department of Energy and National Science Foundation. The new facilities would work to “jump-start quantum algorithm and application development and quantum computer science, make available a critical scientific and computational resource to scientists at U.S. national laboratories and universities, and serve as a market-making catalyst to accelerate the growth of U.S. industry producing hardware and software.”

Other recommendations focus on fostering cross-sector collaboration among QIS researchers and developing a quantum workforce. These include funding “discovery institutes” that would target crucial issues over periods of 15 to 20 years and establishing “pre-competitive quantum research collaborations.” It points respectively to NSF’s Quantum Leap Challenge Institutes and the National Institute of Standards and Technology’s Quantum Economic Development Consortium as two recent activities that align with these aims. To train what PCAST calls a “quantum generation,” it stresses that educational programs should span academia, industry, and the national labs to offer the interdisciplinary skills that QIS requires.

For AI, the report states it is “reasonable” to estimate that annual U.S. industrial R&D spending in the area will exceed $100 billion during the next five years. Accordingly, it explains such a funding increase would enable expanded work on key problems such as “making AI learn from smaller amounts of data, developing causal-inferencing AI, creating trustworthy AI, developing AI engineering methodologies that allow greater scaling of AI applications, and developing new approaches for AI hardware in the post-graphics processing unit era.” It adds the resources should also support basic research in areas such as “AI security and vulnerability; connectivity and communications; data curation and governance; privacy and ethics; and the implementation of associated best practices.”

At an estimated cost of $1 billion over five years, the report recommends that NSF establish at least one AI institute in every state, building on the six it already  plans to establish through the new National AI Research Institute program. It proposes these institutes should be networked together into “National AI Consortia” that facilitate the sharing of best practices, data, and computation resources.

The report also advocates that AI, QIS, and high-performance computing be harnessed to develop an “Accelerated Discovery Workflow” for scientific research. It suggests this would comprise an AI-enabled “deep search” of the existing knowledge base, followed by “intelligent simulation” using classical or quantum methods, and ultimately AI-driven generative modeling and experimentation.

It suggests such an approach might be used to “re-energize and scale up” the federal government’s Materials Genome Initiative, an interagency effort to accelerate the discovery and application of new materials. It further proposes the initiative address a newly defined set of “Materials Grand Challenges” that identify the most critical materials across a range of sectors for the U.S. to develop over the next 5 to 20 years. The report also recommends expanding the National Strategic Computing Initiative to focus on embedding AI in software applications and facilitating the “development, delivery, and use of advanced computing technologies by a broad spectrum of commercial and research enterprises.” 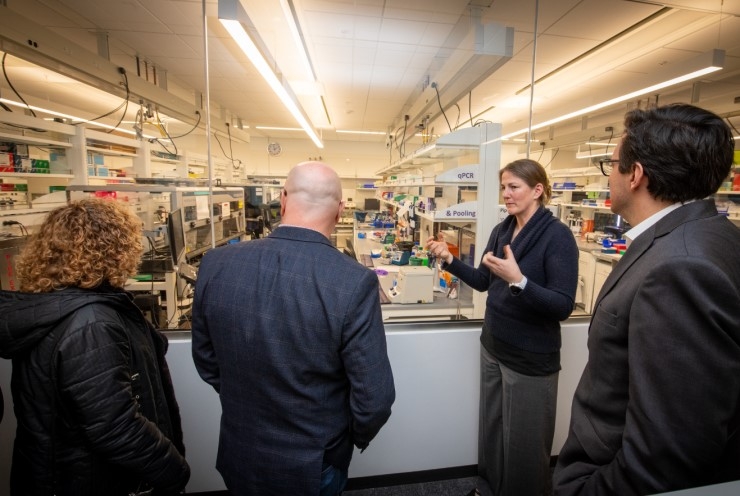 Kjiersten Fagnan, chief informatics officer of the Joint Genome Institute, discusses the lab’s work with PCAST members during a visit this past January.

Beyond efforts focused on AI and QIS, PCAST also proposes the creation of what it calls “Industries of the Future Institutes,” which would aim to strengthen the feedback between basic and applied research and accelerate technology commercialization.

Similar to the “Alpha Institutes” idea Droegemeier floated last year, PCAST envisions the IoTF Institutes as each staffed by between “several hundred to a few thousand” researchers at various career stages, including top talent from across government, industry, and academia. The institutes would also promote cross-sector partnerships by offering favorable intellectual property terms, administrative structures that reduce regulatory burdens, and other incentives. Making the case for such entities, the report states,

Past bastions of S&T excellence, such as Bell Laboratories, have been lost to a world where the risks and complexities of blue sky research, globalization, and paths to market created challenges no one entity could overcome for delivering the required advancements and innovations that will underlie American competitiveness in IotF.

Though each institute would involve participation from federal labs overseen by various agencies, PCAST proposes that DOE would be responsible for administering them. It suggests DOE could establish them “through a competitive process to serve as S&T collaboration zones driven by public-private partnerships and projects.”

Initially, the report suggests establishing two “flagship” institutes respectively focused on the application of AI to advanced manufacturing and biotechnology.

It states the biotechnology institute would apply AI and machine learning to efforts such as advancing understanding of disease spread, accelerating discovery of therapeutics and vaccines, and improving “biosphere sustainability.”

The advanced manufacturing institute would focus on “generative design,” an approach that uses advanced computational tools to identify design alternatives for manufactured articles. Another focus of this institute would be to expand the capabilities of the domestic manufacturing supply chain as a pathway to developing what the report calls “Factories of the Future.” Such factories would use “digital twins,” which the report defines as “digital replicas or simulations of all of the factory’s assets that allow companies to model, track, and understand their entire factory.”

The report focuses its workforce development recommendations on domestic educational and training programs relevant to the Industries of the Future and STEM disciplines more generally. While the report states PCAST believes it is “critically important that the United States remains a beacon for highly skilled talent,” it does not propose specific actions to increase the country's attractiveness to foreign students and scholars.

For NSF, the report recommends its Education and Human Resources Directorate establish a grant program that funds pilot multi-sector “STEM Retraining Boards” that would “connect individuals to new or existing opportunities for continuing education, training, certification, and reskilling in IotF and STEM fields.” The program would initially provide 50 grants of up to $1 million each to create the boards, with the goal that by 2025 they would collectively “bring millions of Americans from non-technical backgrounds into IotF and other STEM jobs.”

The report also proposes that NSF receive funding sufficient to offer Graduate Research Fellowships to all computer science undergraduates who earn GPAs above a certain threshold, and it suggests the agency permit its graduate fellows to spend time in industry as part of their training.

Calling for innovation in curricula development, the report recommends creating “universal skills-based licenses and certifications” for IotF that are industry-recognized and supported by both federal funding and matching support from the private sector and universities.

It explains, “Overly specialized, non-standard job specifications make it difficult for potential hires, particularly those from nontraditional backgrounds, to apply for STEM jobs and for employers to fill positions. Establishing industry-recognized credentials and standards would benefit both the recruitment and retention of individuals into STEM at all stages of the STEM pipeline.”