Scientists to Strike for Black Lives, #ShutDownSTEM on June 10

An effort organized by Black physical scientists and allies calls on the research community to take specific actions to combat anti-Black racism. 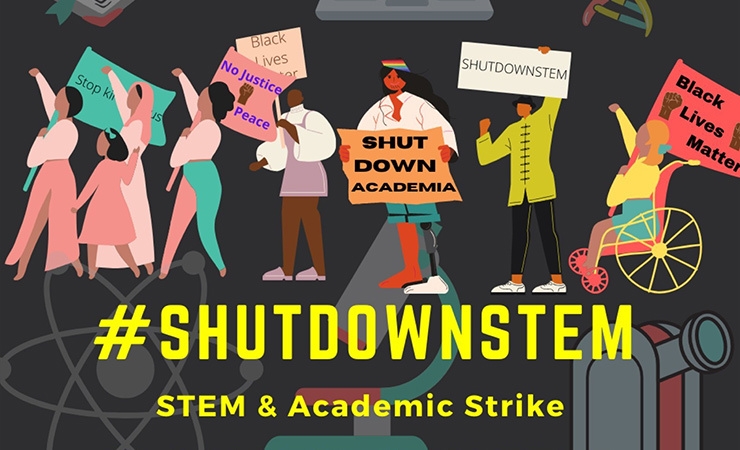 More than 3,000 physicists, astronomers, and other academics have pledged to forgo research, classes, meetings, and other normal business on June 10 to pursue a day of action dedicated to protecting the lives of Black people.

On the website Particles for Justice, a group of 15 physicist organizers write the Strike for Black Lives is needed “to hit pause, to give Black academics a break and to give others an opportunity to reflect on their own complicity in anti-Black racism in academia and their local and global communities.” The strike is being held in conjunction with the #ShutDownSTEM and #ShutDownAcademia initiative, a collaboration that includes astronomers and other physical scientists.

“I want non-Black people to respond as if lives depend on it because they do,” says Chanda Prescod-Weinstein, a particle cosmology theorist and feminist theorist at the University of New Hampshire.

The idea for the strike came from discussions between Prescod-Weinstein and Brian Nord, a cosmologist and physicist at Fermilab and the University of Chicago. The two Black scientists organized the effort with the ad hoc Particles for Justice group and collaborated with members of #ShutDownSTEM.

Emphasizing the importance of action in an open letter, Nord wrote, “When I was a child, I wanted to grow up to share the beauty and gifts of a scientific understanding of the universe with the world. I’ve had the privilege to find and create knowledge for my fellow humans. I’m one of the ‘lucky’ ones. How many have shared my dream, but never got this close, because of the science community’s complicity through inaction?”

The strike comes as people across the U.S. and abroad protest systemic racism and police violence in the wake of the killings of George Floyd, Breonna Taylor, Ahmaud Arbery, Tony McDade, and many others. Among the numerous Black Americans speaking out are scientists who are sharing their personal experiences of police brutality and racism, including racism in the ivory tower. Using the hashtag #BlackInTheIvory on Twitter, scientists have recounted, for example, being left out of networking opportunities at conferences and being told they were hired only because of their race.

Many academic institutions and scientific societies have released statements in support of protesters and the Black Lives Matter movement, but only some committed to specific plans for sustained action. Several have announced they are halting regular business on June 10 in support of the strike.

The Particles for Justice organizers call out the lack of Black physics faculty and an atmosphere in physics departments that make Black students “often feel unwelcome, unsupported, and even unsafe.” And they emphasize that seminars on implicit bias or on diversity and inclusion are not going to solve the problem: “To steward a new generation of students, research staff, and faculty in physics means to acknowledge our collective responsibility to combat anti-Blackness, not just on campus, but also in the streets, in governance, and society at large.”

The organizers write that non-Black academics should use June 10 to “educate themselves and advocate for change in their communities.” They also provide a list of suggested actions, including making an action plan for how to respond if they witness racism or police brutality, advocating for reforms to campus security procedures, and donating at least a day’s worth of salary to organizations that advance justice for Black people.

Contributors to the #ShutDownSTEM and #ShutDownAcademia initiative emphasize that to make change, academics should rethink the way they perform the duties they are being asked to give up for the day — such as writing grant proposals and recommendation letters, citing past research in papers, and sitting on admissions committees.

Scientists who are conducting time-sensitive research on COVID-19 should not feel obligated to participate in the strike, the organizers write. Nor should students, faculty, and others who fear that their standing at their institution would be harmed by participating, such as contingent faculty in precarious employment positions.

On Twitter, academics are using the hashtags #Strike4BlackLives, #ShutDownSTEM, and #ShutDownAcademia to announce their participation in the strike and to share their plans. Some participants report emailing the rest of their department to encourage them to join in. The administrators of the arXiv preprint server announced that they will not post any papers on the evening of June 9, and they encouraged researchers to not submit any work on June 10.

“We encourage arXiv readers to use the time they would normally spend reading the daily announcement or submitting an article to instead read about and discuss racism and how they will work in their own local and professional communities to address it,” the administrators wrote.

This article is adapted from an June 8 post by Physics Today, which is also published by the American Institute of Physics.