The Senate Commerce, Science, and Transportation Committee held a hearing on Feb. 12 to draw attention to a trio of space hazards requiring a global response: space weather, orbital collisions, and asteroid impacts.

Asserting each threat deserves greater attention, committee members called for more concerted monitoring efforts and highlighted pending legislation that seeks to boost preparedness. Meanwhile, the witness panel explored options for collecting the data necessary for mitigation efforts as well as how responsibilities for research and operational warnings are distributed across the government.

Opening the hearing, Committee Chair Roger Wicker (R-MS) remarked, “Our ability to prepare for and mitigate asteroid impacts, solar storms, and space debris is an important part of preserving global commerce and even human life. It sounds like a movie script, but it is reality.” He invoked the 1908 Tunguska asteroid impact, which he noted leveled millions of trees over 2,000 kilometers in Siberia, as well as the potential for solar storms to severely damage the electric grid.

Wicker observed that the NASA Authorization Act, which the committee advanced last year, would direct NASA to develop by 2025 a space-based infrared survey telescope capable of detecting NEOs that are at least 140 meters in diameter. He also highlighted the committee’s Space Weather Research and Forecasting Act, which would delineate relevant federal agency responsibilities.

“For a long time, the only way a mission to detect these asteroids could be funded was by competing with other missions in NASA,” she said, echoing a finding from a recent National Academies report. She pointed to the difficulty the NEOCam project at the Jet Propulsion Laboratory experienced in obtaining support, saying “it was not considered high enough on the value chain for science, and the government needs to change that.”

Speaking generally of the three threats explored at the hearing, Cantwell added, “We need to dramatically increase our research dollars in all of these areas. We need to ensure that agencies like NASA could fund missions and operations to improve our understandings of these threats and continue to give us assessments here in Washington to policymakers so we can move forward.” 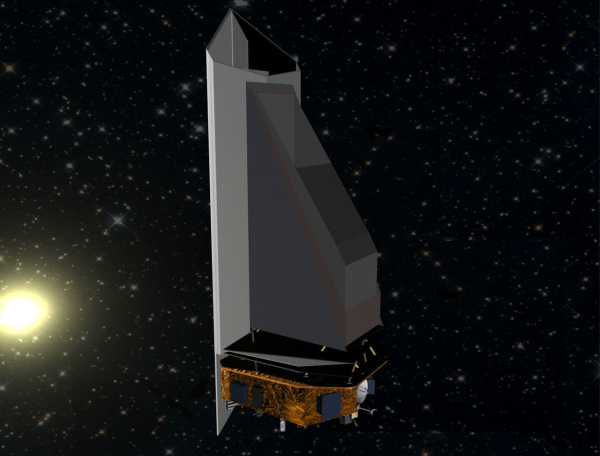 Concept image of the NEOCam telescope. NASA has committed to developing a similar telescope called the NEO Surveyor.

Thomas Zurbuchen, the head of NASA’s Science Mission Directorate, attested to the agency’s role in researching all three hazards and transitioning capabilities to other agencies when appropriate.

He said NASA is now focused on reaching the goal of detecting 90% of NEOs over 140 meters in size that was set by the NASA Authorization Act of 2005. He highlighted how NASA achieved a separate congressionally mandated goal of detecting 90% of NEOs over one kilometer in size in 2011 and has recently committed to developing a successor project to the NEOCam concept that the agency will manage directly. In NASA's appropriation for fiscal year 2020, Congress provided $36 million to begin work on the telescope, which is called the NEO Surveyor.

Asked by Wicker how the federal government would react today to an event similar to the Tunguska asteroid, Zurbuchen said the likely response would be to evacuate the expected impact area. He added that NASA is currently testing deflection technology through its Double Asteroid Redirection Test (DART) mission, which is expected to launch next year. “In some future we currently don't have but we're working on, what we'd actually like to see is the option of deflecting it,” he said.

Concerning space weather, Zurbuchen noted NASA has started a pilot program with the National Oceanic and Atmospheric administration to better transition research results into operational space weather models. He emphasized, though, that NASA has a uniquely direct operational role in planetary defense through monitoring asteroids and other NEOs. “There’s not another agency to transition that to,” he said. 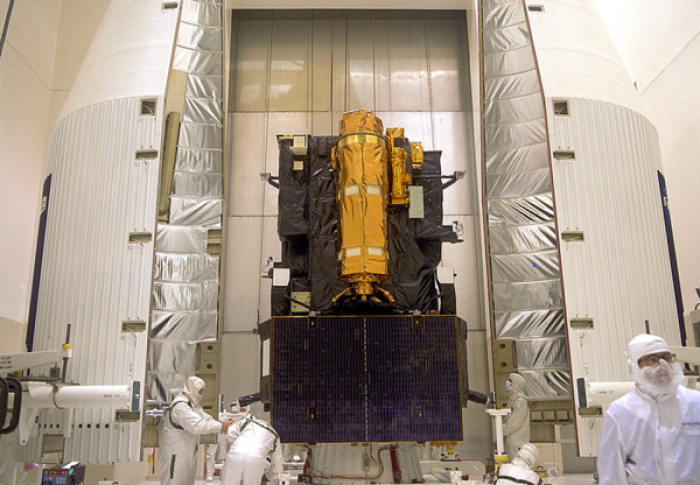 The Solar and Heliospheric Observatory being loaded into its payload fairing prior to launch in 1995.

William Murtagh, director of NOAA’s Space Weather Prediction Center, testified in support of a coordinated cross-government approach to space weather preparedness. Referencing the 2015 National Space Weather Action Plan and its 2019 update, which he played a leading role in developing, he noted the documents cover 20 federal departments and agencies but are not backed by the “force of law.”

Murtagh argued that enacting space weather legislation would provide momentum to the effort. “We need something from Congress to really move this thing along, especially when you get so many different agencies, so many different departments involved in it,” he said.

He also suggested there should be a more formal process for transitioning research advances into operational models, analogous to that used by the National Weather Service for terrestrial weather models. He noted that NOAA’s forthcoming Earth Prediction Innovation Center will help the agency partner with academia and the private sector to test and validate new capabilities.

Asked by Wicker how NOAA would respond to a major space weather event, Murtagh said the agency aims to alert power grid operators as quickly as possible so they can take mitigation measures.

Currently, the primary instrument NOAA uses to forecast coronal mass ejections is a coronagraph on the Solar and Heliospheric Observatory (SOHO) spacecraft, which launched in 1995 and is well past its design life. Cantwell pressed Murtagh on why NOAA is not planning on launching replacement spacecraft sooner than 2024, the target date for the agency’s Space Weather Follow On mission. He replied SOHO is NOAA’s “biggest concern,” but said the agency can also leverage NASA’s STEREO spacecraft over the next four or five years.

In response, Cantwell said, “Mark me down as someone who wants to be more aggressive in this space.” Drawing a comparison with how the U.S. has fallen behind Europe in weather forecasting capabilities, she said, “If we want to be the leaders here in space, then we need to have the information.”

Much of the hearing focused on ways to better track the growing number of satellites in orbit, with senators citing the impending proliferation of commercial “megaconstellations” as presenting a potential collision hazard.

Asked by Cantwell why there has not been more progress toward developing a data and software framework for tracking objects in orbit, University of Texas aerospace engineer Moriba Jah said, “I feel that if there were some dedicated resources to make this happen, you’re going to find no shortage of people … who’d be willing to contribute to this and really build it up.”

The director of the Commerce Department’s Office of Space Commerce, Kevin O’Connell, added that the administration is proposing to increase the office’s budget from $2.3 million to $15 million for fiscal year 2021, in part to support an “open architecture data repository” for space situational awareness.

Pointing to how the satellite constellations planned by SpaceX and OneWeb could increase the number of active satellites in orbit by almost 50% this year alone, he remarked, “As challenging as the space debris problem is today, it is bound to grow more complex.”