President Trump’s suspension of wide swaths of visa programs through the end of the year has drawn an outcry from universities and businesses, especially given the inclusion of H-1B visas granted to highly skilled workers. 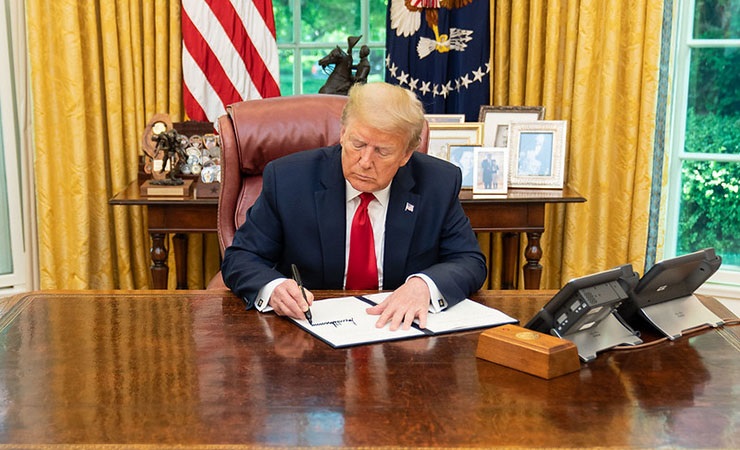 President Trump issued a proclamation yesterday that suspends the issuance of new green cards and various nonimmigrant visas through the end of the year. The order has drawn condemnation from universities and businesses, in part for halting the H-1B program, which provides temporary work visas to high-skilled immigrants.

The proclamation asserts the pause is needed to provide more job opportunities to Americans in view of the current state of widespread unemployment. But proponents of the H-1B program say it is a key tool for filling jobs lacking an adequate domestic workforce, particularly in STEM fields.

The proclamation also suspends other categories of nonimmigrant visas, though it is not as sweeping as some had feared. While the order affects various categories of J visas, it exempts those used by professors, scholars, and students. It also does not affect the Optional Practical Training program, which allows foreign students to work in the U.S. for up to three years after they finish their degree programs. The administration has reportedly considered curtailing it.

Proclamation builds on past administration orders

The restrictions expand on an initial proclamation that Trump issued in April halting the issuance of new green cards for 60 days and ordering a review of nonimmigrant visa programs. Green cards confer lawful permanent resident status, while nonimmigrant visas typically allow for stays in the U.S. lasting up to a few years.

Justifying the expansion to nonimmigrant programs, the new proclamation states, “Under ordinary circumstances, properly administered temporary worker programs can provide benefits to the economy. But under the extraordinary circumstances of the economic contraction resulting from the COVID-19 outbreak, certain nonimmigrant visa programs authorizing such employment pose an unusual threat to the employment of American workers.”

The proclamation includes a “national interest” waiver for medical workers who are involved in research on COVID-19 or care for patients afflicted with the disease. The exemption also applies to individuals who are deemed “critical to the defense, law enforcement, diplomacy, or national security of the United States … or are necessary to facilitate the immediate and continued economic recovery of the United States.” Implementation of this provision is delegated to the Departments of State, Labor, and Homeland Security.

Absent widespread exemptions, the proclamation could affect hundreds of thousands of potential visa seekers. In a press briefing, an unnamed administration official asserted the new restrictions could “open up” about 525,000 jobs for Americans.

A large fraction of the prospective applicants affected by the order are workers eligible for H-1B visas. In fiscal year 2019, the State Department issued 188,123 H-1B visas, which are valid for an initial period of three years and can be extended. Although the order’s immediate impact will be somewhat blunted given that visa processing has already slowed dramatically amid the pandemic, stakeholders fear it could be extended and, in any case, sends a message the U.S. is unwelcoming to foreign workers.

The proclamation notably affects both the “capped” portion of the H-1B program, which allocates up to 85,000 visas to companies each year via a lottery system, and the uncapped portion that is used by universities and other non-profit organizations. It also applies to H-4 visas, which are used by spouses of H-1B holders.

The order also sets in motion a prospective overhaul of the capped visas, instructing the Department of Homeland Security to “consider promulgating regulations or take other appropriate action regarding the efficient allocation of [H-1B] visas.”

At the press briefing, the administration official stated the president has “instructed us to get rid of the lottery and replace it with ranking the salaries,” meaning that the top 85,000 salary offers across all applicants would receive the visas. “This will drive both the wage level and the skill level of the H-1B applicants up. It will eliminate competition with Americans, it will reduce American competition in these industries at the entry level, and will do more to get the best and the brightest,” the official said.

The administration has long sought to modify the H-1B visa program, dating back to a 2017 executive order, and critics are charging it is using the pandemic as a pretext to push through various aspects of its broader visa and immigration agenda.

In the weeks leading up to Trump’s new proclamation, companies and research groups engaged in an intense lobbying effort to convince the administration of the benefits of nonimmigrant visa programs, emphasizing their importance for the STEM workforce.

In a letter to the White House last month, 324 employers, trade groups, and university associations argued that “temporarily or indefinitely eliminating or reducing the H-1B program or discouraging its use would not create or leave more jobs for U.S. natives and would risk reducing growth and productivity.”

A group of 36 scientific societies, including AIP, also wrote to the White House urging the administration to “prioritize the immigration of science and technology talent that will spur the scientific breakthroughs and economic growth of the United States that is needed for rapid recovery from the COVID-19 pandemic.”

Business and university associations are now blasting the proclamation as a blow to the U.S. economy.

Association of American Universities President Mary Sue Coleman asserted in a statement that the move “will harm our nation’s economic and scientific competitiveness while failing to achieve any of the president’s stated goals in issuing it.” U.S. Chamber of Commerce CEO Thomas Donohue wrote the proclamation represents “a severe and sweeping attempt to restrict legal immigration.”

“Putting up a ‘not welcome’ sign for engineers, executives, IT experts, doctors, nurses, and other workers won’t help our country, it will hold us back,” he added.

Many university scientists and administrators have also taken to Twitter to call attention to the effects of the H-1B program suspension.

Wirtz added, “This order is an unmitigated disaster for US academia and for the country. It will have a chilling effect on the ability of the US to attract the world's best scientists and engineers even if lifted by a new administration because of the uncertainty it creates.”

John Preskill, director of the Institute for Quantum Information and Matter at Caltech, wrote, “Ouch! Suspension of the H-1B visa program, even if temporary, is a very painful blow to US science and the tech industry.”

Andrew Ng, a prominent artificial intelligence researcher, tweeted, “The suspension of the H-1B visa program is bad for the US, bad for innovation, and will shatter dreams and disrupt lives. As a former H1B visa holder, my heart goes out to all the families affected.”