Trump Visa Policy Changes Could Have Broad Consequences for Science

The Trump administration has made and is considering several immigration policy changes that could have broad implications for the U.S. scientific research enterprise.

The federal government has begun implementing new visa screening procedures to implement President Trump’s calls for the “extreme vetting” of travelers and immigrants to the U.S. Many scientific societies and universities have expressed their concerns that such changes, alongside the administration’s efforts to restrict entry to travelers from certain countries, would prove detrimental to American science and engineering.

Meanwhile, the Trump administration is considering pursuing additional changes to the nation’s immigration system that would also have significant implications for international students and scientists. These include requiring students to reapply for visas each year, overhauling the H1-B visa program, and pushing for a merit-based system for allocating visas to those seeking permanent residence in the U.S. 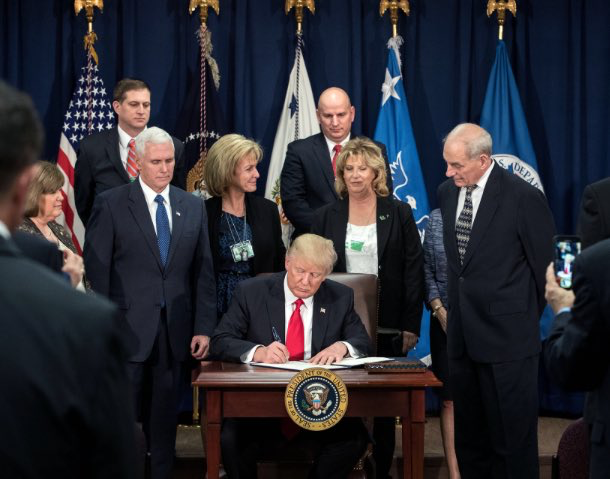 This May, the State Department received approval to use a more extensive visa application questionnaire that requests social media account names and additional biographical information from applicants. The form notes that although providing this information is voluntary, withholding it could delay or prevent processing of the application.

In its explanation of the change, the State Department said the supplementary form will be issued to “immigrant and nonimmigrant visa applicants who have been determined to warrant additional scrutiny in connection with terrorism or other national security-related visa ineligibilities.” The administration approved use of the form for six months, although this period could be extended.

More recently, Reuters reported on July 13 that the department will start requiring countries to provide more extensive data as part of the visa review process. Countries that do not take steps to provide the data may face travel sanctions.

Such measures may lead overall visa processing times to increase. Indeed, on June 21, Trump rescinded a portion of a 2012 executive order by President Obama that established goals for visa processing time. The Obama order had directed agencies to develop a plan to “ensure that 80 percent of nonimmigrant visa applicants are interviewed within 3 weeks of receipt of application,” with exceptions for security and resource constraints.

In addition to their strong opposition to the “travel ban” executive order, which the Supreme Court allowed to take partial effect before the court considers it this fall, a group of scientific societies has raised concerns about the State Department’s expanded visa application questionnaire:

We appreciate and support the need to secure our nation and its citizens from individuals who seek to do us and our interests harm. But we caution that this security need should be balanced with the need to remain open to those pursuing academic study and scientific research. ... The notice, as proposed, is likely to have a chilling effect not only on those required to submit additional information, but indirectly on all international travelers to the United States.

Their May 18 letter to the department goes on to warn that the expanded information collection could lead to visa processing delays absent increases in consulate staff and could seriously impact future scientific collaborations. The presidents of the National Academies of Sciences, Engineering, and Medicine expressed similar concerns in a separate letter.

The scientific society letter also points out that several international scientific organizations have already proposed boycotting or halting scientific meetings in the U.S. One such organization is the International Union of Pure and Applied Physics (IUPAP), which will decide at its general assembly meeting in October whether to support any conferences in the U.S. in 2018.

Scientific organizations have long been involved in efforts to reform U.S. immigration policy in ways that balance security concerns with the benefits that come from the freer flow of students and scholars. In the wake of the 9/11 terrorist attacks, visa processing times increased significantly for several years due to enhanced security measures. Scientific societies and others worked to raise the issue of scientist visa delays with the administration and reduce processing times.

On July 10, the Washington Post reported that the Department of Homeland Security is contemplating requiring foreign students to reapply each year for permission to remain in the U.S. DHS spokesman David Lapan told the paper,

DHS is exploring a variety of measures that would ensure that our immigration programs — including programs for international students studying in the United States — operate in a manner that promotes the national interest, enhances national security and public safety and ensures the integrity of our immigration system.

The article also quotes Pedro Ribeiro, a spokesman for the Association of American Universities, who called the proposal “both a policy and logistical nightmare” and said that it would have “a tremendous chilling effect on students who would have to spend more time doing paperwork than studying.” 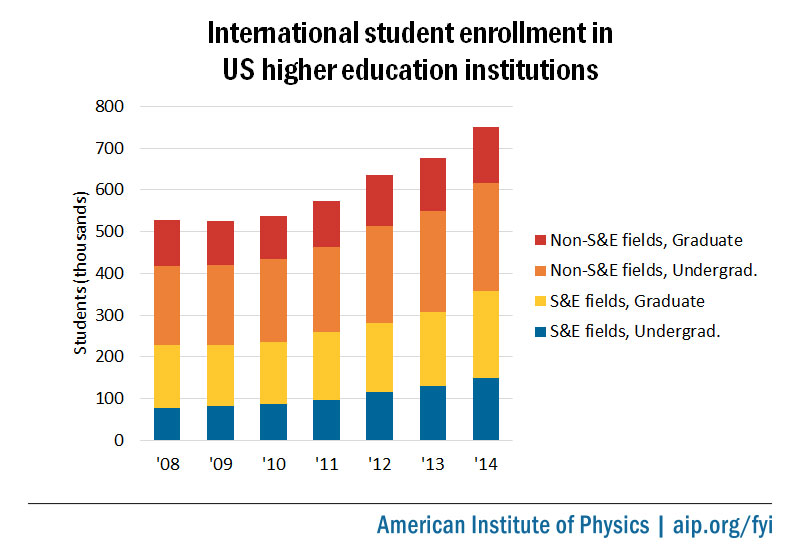 Data from the 2016 Science and Engineering Indicators. Numbers include active foreign national students on F-1 visas and exclude those in the Optional Practical Training program.

According to a June report by DHS, just under 514,000 international students were pursuing STEM degrees in May 2017, an 8 percent increase over May 2016.

The administration could also seek to modify the Optional Practical Training program, which allows international students to stay in the U.S. after graduation to work for a period of time. The number of STEM graduates using this program has increased considerably in recent years, after the Bush and Obama administrations extended their permitted duration of stay. 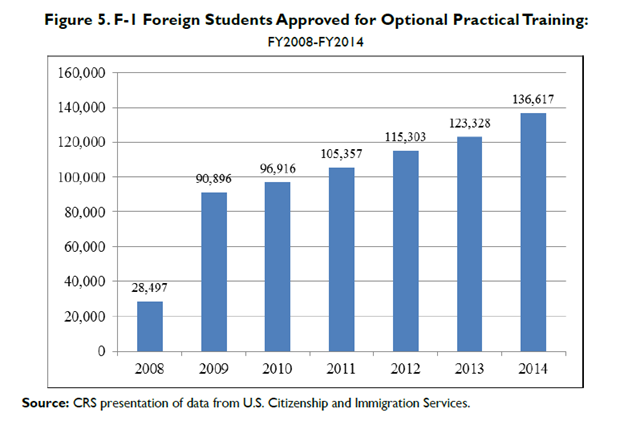 The administration is also considering policy changes that would affect the immigration of workers with technical skills. In an April 18 executive order, President Trump directed a review of the H1-B visa program, which organizations use to hire high-skill foreign workers. The order directs agencies to “suggest reforms to help ensure that H-1B visas are awarded to the most-skilled or highest-paid petition beneficiaries.”

Critics of the H1-B program claim that certain information technology companies have abused the visa allocation system. Some also argue that the program displaces American workers.

The administration could make some modifications to the H1-B program unilaterally, but major changes, such as altering the number of visas permitted, would require legislation. This year, several H1-B reform bills have been introduced in Congress.

In addition, Trump may also push to overhaul the system by which immigrants obtain permanent residence in the U.S.

On July 12, Politico reported that the administration is working on a legislative proposal that would halve the number of legal immigrants allowed into the country each year by 2027 and implement a merit-based system that would favor highly skilled immigrants. The article notes that one aspect of the proposal is that it would increase the number of green cards that are “granted on the basis of merit to foreigners in a series of categories including outstanding professors and researchers, those holding advanced degrees, and those with extraordinary ability in a particular field.”