Trump Clamps Down on Chinese Grad Students and Researchers

A new presidential proclamation bars entry to the U.S. for many Chinese graduate students and visiting researchers if they have ever been connected to Chinese institutions deemed to have military ties. The move comes as even stricter limits on Chinese nationals studying or conducting research in STEM fields are being proposed in Congress. 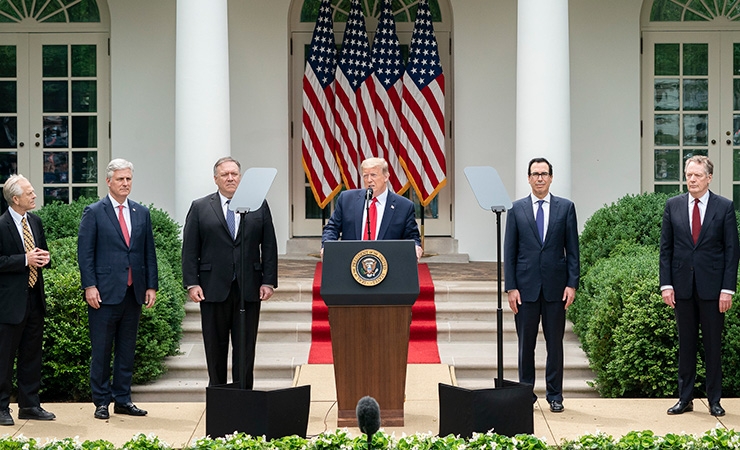 Speaking in the White House Rose Garden on May 29, President Trump announced new restrictions on entry to the U.S. for Chinese graduate students and researchers. Secretary of State Mike Pompeo, standing immediately to the left of Trump, will be responsible for applying the new policy.

President Trump issued a proclamation on May 29 that bars entry to the U.S. for Chinese graduate students and visiting researchers who are regarded as posing a risk of passing technological knowledge back to the Chinese military because they have ties to certain institutions in China. The proclamation, which took effect yesterday, does not list specific institutions that would disqualify applicants for entry, leaving application of the policy to the State Department’s discretion.

Justifying the measure, the proclamation cites longstanding allegations that the Chinese government uses a variety of means to misappropriate U.S. science and technology from companies and universities. The proclamation states there is a “particular cause for concern” that advanced students and postdoctoral researchers are apt to be “exploited or co-opted” by Chinese authorities as “non-traditional collectors of intellectual property.”

The new policy drew quick praise from Sen. Tom Cotton (R-AR), who noted it echoes a bill he and five other Republican senators introduced one year ago. Now, Cotton is advocating much stricter measures through a new bill that would bar most Chinese nationals from obtaining visas for graduate study or postdoctoral work in any STEM field, as well as from receiving any funds from federal research grants.

Trump’s proclamation specifies its prohibition on U.S. entry is directed at Chinese nationals who are funded by, or have ever been employed by, studied at, or conducted research at an entity that “implements or supports” the Chinese government’s strategy of “military-civil fusion.” The proclamation further specifies it applies to individuals seeking to enter the U.S. on an F or J visa to study or conduct research, except for those seeking to study at the undergraduate level. Among its other waivers, the policy exempts individuals in fields deemed irrelevant to military-civil fusion.

Neither the Chinese government nor the State Department maintains a public list of institutions that contribute to military-civil fusion. The department has, though, funded the Australian Strategic Policy Institute’s development of a “Defense Universities Tracker,” which assesses the risk that a collaboration with an institution will be leveraged by the Chinese military. In January, a department official highlighted the tracker as a tool U.S. researchers can use to perform due diligence before entering into partnerships with Chinese institutions.

However, it remains unclear how broadly the State Department intends to apply the new policy. The tracker lists a large number of military-affiliated institutions as well as many nominally civilian institutions flagged as “high” or “very high” risk. In a statement yesterday, though, Secretary of State Mike Pompeo played down the policy’s scope, remarking,

Our concern is with the malign actions of the Chinese Communist Party and specific individuals, not with the Chinese people. The graduate students and researchers who are targeted, co-opted, and exploited by the [Chinese] government for its military gain represent a small subset of Chinese student and researcher visa applicants coming to the United States.

Even still, more measures could be coming soon. The proclamation gives the State Department discretion to revoke visas it has already issued to individuals who meet its criteria for denial of entry, though that would not necessarily force them to leave immediately.

The proclamation also directs the Departments of State and Homeland Security to take actions on their own authority to further mitigate risks of China acquiring “sensitive” U.S. technologies and intellectual property, and to recommend additional changes in visa and immigration policy within 60 days.

While Trump’s proclamation is framed as part of his administration’s ongoing efforts to safeguard U.S. science and technology against exploitation, it was implemented alongside a number of other actions intended to establish a more confrontational posture toward China.

Announcing the new posture to reporters, Trump condemned China’s assertion of a new authority to enforce security in the semiautonomous city of Hong Kong and cast blame on China for U.S. deaths from the COVID-19 pandemic. However, Trump cited the economic conditions brought by the pandemic in justifying another recent shift in visa and immigration policy: the temporary suspension of entry to the U.S. for individuals from any country who are seeking to immigrate.

OPT permits foreign students who complete their educational programs to work in the U.S. for between one and three years. Although the senators’ proposal is not specific to China, it would severely impinge on Chinese nationals’ participation in U.S. research. According to the Institute for International Education, a nonprofit organization, about 70,000 Chinese nationals were in the U.S. through the OPT program during the 2018-2019 academic year, representing 31% of the program’s total participants.

Reportedly, the Trump administration is seriously considering suspending OPT. Higher education advocacy associations and many technology companies have united to express opposition to such a move.

Cotton first raised the idea of barring Chinese graduate students from the U.S. in April and rolled out his legislative proposal on May 27. Titled the SECURE CAMPUS (Safeguarding Educational Institutions, Colleges, Universities, and Research Entities from China’s Attempts to Misappropriate Property of the United States) Act, it is cosponsored by Sen. Marsha Blackburn (R-TN) and Rep. David Kustoff (R-TN).

The bill would bar the U.S. from issuing visas to Chinese nationals seeking enrollment in U.S. educational institutions to “participate in graduate-level or post-graduate-level coursework or academic research in a field of science, technology, engineering, or mathematics.” The provision would not apply to Hong Kong residents and waivers could be granted for religious and ethnic groups that are demonstrated to be “systematically oppressed by the Chinese Communist Party.”

In addition, the bill would require recipients of federal research grants to certify they are not Chinese nationals and will not “knowingly employ” Chinese nationals to carry out grant-funded activities. It would also bar participants in Chinese talent recruitment programs from receiving federal research funds and prohibit federally funded institutions from employing program participants. Moreover, any program participants or recruiters in the U.S. would have to declare themselves as agents of the Chinese government.

Chinese talent recruitment programs offer funding to Chinese expatriates and to non-Chinese citizens, often as inducements to establish laboratories in China. However, the FBI argues they serve as conduits for research misappropriation and it has arrested a number of individuals for concealing connections to them. In the most notable case, Harvard University Chemistry Department Chair Charles Lieber was arrested in January for concealing $1.5 million he received, plus $50,000 per month, from China’s marquee Thousand Talents program.

If implemented, the bill’s restrictions would represent a sea change for U.S. educational institutions. According to statistics compiled by the National Science Board, in 2018 there were more than 80,000 Chinese graduate students in the U.S. studying science and engineering, representing 36% of the number from all countries.

Although it is unlikely Cotton’s bill will be enacted, it could serve as a template for future administration actions, much as his bill from one year ago resembles last week’s proclamation. The 2018 Supreme Court decision in the case of Trump v. Hawaii, concerning the nation-specific travel bans implemented early in the administration, established that the president has “broad discretion” to suspend the entry of noncitizens to the U.S.

Scientific societies and university groups have not yet weighed in on the specifics of Trump’s proclamation or Cotton’s proposal. However, an “action alert” issued by the Association of American Universities on May 28 opposes the idea of broad curbs on Chinese student visas. It states, “Blanket restrictions would jeopardize our nation’s ability to attract top talent that contribute to the strength of our nation’s health, security, and economy.”