A National Academies panel has recommended the U.S. launch an exploratory research program to better characterize the feasibility and risks of solar geoengineering methods that could be used to help curb global warming. 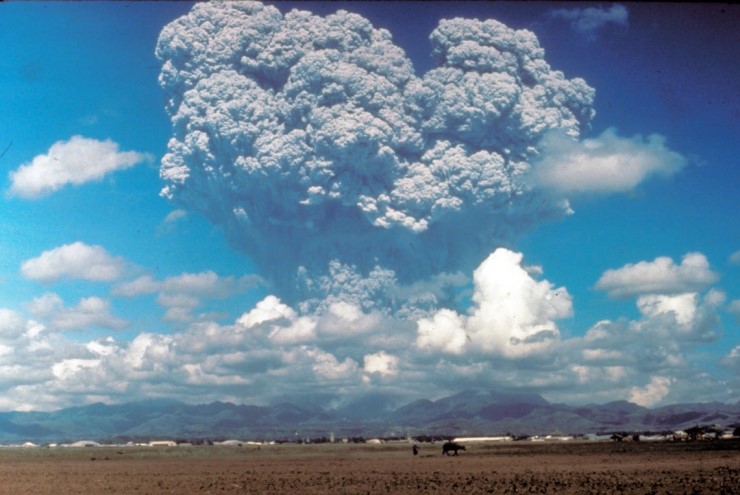 Human-directed stratospheric aerosol injection is one of three geoengineering approaches considered in a new National Academies report, which notes that the 1991 eruption of Mount Pinatubo in the Philippines injected aerosols into the stratosphere that are estimated to have cooled global mean temperatures by about 0.5°C for at least a year.

The National Academies released a report last week that recommends the U.S. spend between $100 million and $200 million over five years on exploratory research into solar geoengineering methods, which would cool the Earth by altering the atmosphere to reflect more sunlight. The report states that such methods should not be viewed as an alternative to decarbonization or climate adaptation activities, and that the research initiative would focus on “developing policy-relevant knowledge, rather than advancing a path for deployment.”

The study was launched in 2018 with funding from several private foundations and later received support from NASA, the National Oceanic and Atmospheric Administration, and the Department of Energy. It was conducted by a 16-member committee chaired by Stanford University ecologist Chris Field and builds on a 2015 Academies study on the topic.

Following its release, the report received significant attention from major media outlets, with the New York Times' coverage attracting criticism from scientists for implying the report endorses geoengineering outright. At a briefing last week, Field stressed the committee is not advocating for or against deployment, explaining that “we simply don’t have the information to make mature decisions at this point.” Instead, it recommends creating a governance framework and stakeholder engagement mechanisms that would guide how future research informs the policymaking process.

The report emphasizes that each method would not address all the impacts of rising greenhouse gas levels, such as ocean acidification, and that each could “lead to a variety of unintended consequences,” such as disrupting precipitation patterns. In addition, it states that absent simultaneous efforts to reduce emissions, reliance on solar geoengineering “entails unacceptable risk of catastrophically rapid warming if the intervention were ever terminated.”

Accordingly, the report outlines a three-pronged research agenda that addresses both technical and social factors.

It suggests that about 35% of the research budget go toward technical feasibility studies that include consideration of scalability and potential unintended impacts on climate, ecology, and social systems. About 20% would go toward examining relevant social dimensions, including public perceptions of the research, prospects for cooperation and conflict, and ways to integrate ethics and equity considerations into governance frameworks. Another 20% would support studies on the “decision space” surrounding solar geoengineering research and possible deployment, exploring “which futures (among the wide range that are possible) may be most fruitful to investigate.” The remaining 25% of the budget would be flexibly allocated across the categories depending on how the research evolves.

The report emphasizes that the research program “should not shift the focus from other important global change research, and it should recognize the risk of exacerbating concerns about a slippery slope toward deployment.” It notes that the initial five-year budget proposed for the initiative represents a small fraction of the annual budget of the interagency U.S. Global Change Research Program (USGCRP), which stood at about $2.5 billion in fiscal year 2019.

Nevertheless, the initiative would represent a substantial expansion in support for the field. The report cites an estimate that the U.S. government spent about $7 million on solar geoengineering research between 2008 and 2018.

Schematic of a solar geoengineering research and governance framework.

The governance framework that the report proposes would allow for a periodic assessment of the physical, social, geopolitical, and environmental risks of continuing research or deploying field experiments. In addition, it would establish “exit ramps” to terminate projects if they are found to pose unacceptable risks as well as to prevent projects or programs from “becoming locked into place and renewed year after year even in the absence of meaningful progress.”

Recommending a high bar for approving experiments in nature, the report states, “Deliberate outdoor experiments that involve releasing substances into the atmosphere should be considered only when they can provide critical observations not already available and not likely to become available through laboratory studies, modeling, and experiments of opportunity (e.g., observing volcanic eruptions, rocket plumes, or ship tracks).”

It further recommends that any domestic or international governance framework include procedures for granting permits to do outdoor experiments, mechanisms for stakeholder engagement, systems for openly sharing research results, and a code of conduct for researchers, among other features.

As an example of existing governance in this area, the report cites the independent advisory committee for the Stratospheric Controlled Perturbation Experiment (SCoPEx). The experiment, led by Harvard University and partially supported by philanthropist Bill Gates, aims to release small amounts of reflective molecules in the atmosphere using a high-altitude balloon. This week, the advisory committee recommended the Harvard team suspend plans for equipment test flights in Sweden, citing a need for greater community engagement, and the Swedish Space Corporation pulled support for the project.

The report expresses concerns about both private-sector and philanthropic involvement in funding solar geoengineering research because the sectors lack the “level of accountability to the broader public typically associated with governmental support.” It also points out the ethical implications of having a “small number of wealthy individuals and philanthropies setting research and policy agendas," recommending that involvement from these groups should complement rather than replace core governmental support.

Within the U.S. government, the report states that USGCRP is the “most logical” entity to coordinate solar geoengineering research. However, it adds that “the ability of USGCRP to coordinate across participating agencies has at times been hindered by the program’s inability to directly control relevant agency budgets or to shift funding to emerging research areas.” It therefore expects that successful coordination will require strong support from agency leaders and the White House Office of Science and Technology Policy.

Concluding on a cautionary note, the report states, “For a solar geoengineering research program to be truly effective, it will need to be structured to minimize the risk that findings from a single discipline, a few studies, or a small slice of the research agenda will drive pressure for or against deployment.”
It adds, “Designing such a program will require a deep commitment to exploring the full range of possible effects, avoiding the temptation to classify indirect effects as secondary or unimportant, and managing adaptively so that the program is shaped by ongoing discoveries.”