DOE Gearing Up to Bring Equity Agenda to Energy Technology

As the Senate prepares to confirm Shalanda Baker as head of the Department of Energy’s Office of Economic Impact and Diversity, the House Science Committee has taken an interest in how new energy justice policies can be implemented in the department’s R&D programs. 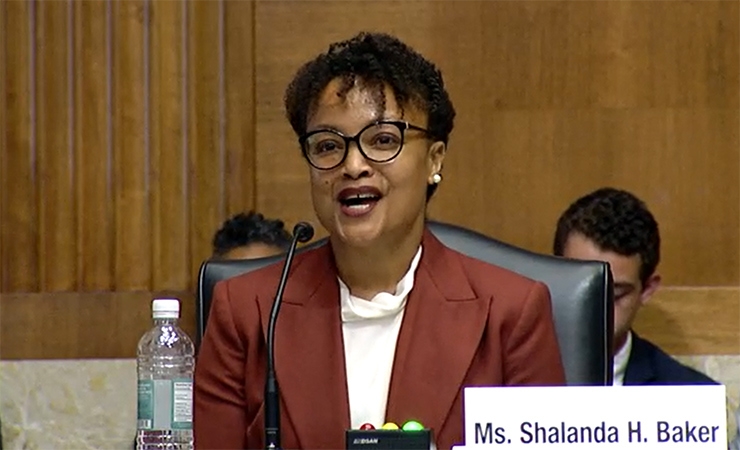 Shalanda Baker testifies before the Senate Energy and Natural Resources Committee on June 8 in support of her nomination to lead the Department of Energy’s Office of Economic Impact and Diversity.

As part of its broader equity agenda, the Biden administration is prioritizing environmental and energy justice initiatives that aim to ensure marginalized and underserved communities benefit from federal programs. At the Department of Energy, the Office of Economic Impact and Diversity will be responsible for implementing this priority, including through the administration-wide Justice40 Initiative, which aims to “deliver 40% of the overall benefits of climate investments to disadvantaged communities and inform equitable research, development, and deployment.”

To lead the office, President Biden has nominated Shalanda Baker, who is currently the office’s deputy director for energy justice, a new position created by the Biden administration. Previously, she was a lawyer, activist, and professor, and is author of the book Revolutionary Power: An Activist’s Guide to the Energy Transition. At her nomination hearing on June 8 before the Senate Energy and Natural Resources Committee, Baker previewed how the administration’s energy justice agenda will be implemented through an array of DOE programs. The committee approved her nomination by voice vote on July 22, and she is currently awaiting confirmation by the full Senate.

The House Science Committee also weighed in on the energy justice discussion at a hearing on July 16 on the subject of “fostering equity in energy innovation.” At the hearing, Energy Subcommittee Chair Jamaal Bowman (D-NY) welcomed Baker’s nomination and urged the administration to include R&D programs in Justice40. “We must build an equitable future from the ground up, not tack it on as an afterthought as technologies are ready to go out the door,” he remarked.

In her nomination hearing opening statement, Shalanda Baker said that if she is confirmed to lead DOE’s Office of Economic Impact and Diversity she will “hit the ground running,” drawing on her academic rigor, sense of entrepreneurship, and lived experiences.

She reflected that her father had worked in the fossil energy industry along the Gulf Coast of Texas and that, though he made good pay, he lived amid environmental hazards and died prematurely. She also said she was raised by her mother in a home that was often too expensive to heat and cool. “On nights when we could see our breath, we layered on blankets and clothing to keep safe from the cold and to try to get a good night’s sleep,” she recalled.

Remarking that “energy justice requires that we rethink and redesign the entirety of our energy system,” Baker said she plans to focus her work at DOE on three main objectives: tackling the financial “energy burden” borne by low-income households, expanding access to capital for communities underserved by federal programs, and bringing “clean technology parity” to communities left behind by the energy transition.

Through Justice40, Baker said she would work to secure a future in the clean energy economy for communities like her father’s, and for “those whom we have relied on for coal, oil, and gas production.” Asked by Committee Chair Joe Manchin (D-WV) whether coal mining communities in places such as West Virginia would specifically count as “disadvantaged” under Justice40, Baker replied that the administration is committed to the well-being of both disadvantaged communities and “energy communities” experiencing the transition away from fossil fuels.

Currently, the details of Justice40 are still under development, but interim guidance the White House issued to federal agencies last week clarifies that the term “disadvantaged communities” will encompass both social and economic variables, including “jobs lost through the energy transition.” The guidance states more specific instruction will be provided later this year in the form of a “geospatial Climate and Economic Justice Screening Tool.”

The guidance also offers preliminary explanations of how “benefits” will be calculated in the context of Justice40, as well as of what sorts of programs and expenditures fall within the initiative's scope. These cover activities such as environmental remediation, energy assistance, energy business loans, workforce development, and federal procurement, and, more generally, “federal grants” in areas such as climate change, clean energy, and clean transportation.

How Justice40 will eventually figure into R&D and technology demonstration programs is not discussed in the interim guidance. However, DOE has already developed a preliminary version of an “Energy Justice Dashboard” that lists and maps all department expenditures through contracts, cooperative agreements, and grants, and tags whether they are relevant to Justice40. DOE describes the tool as a resource for “academics, community leaders, scientists, policymakers, and DOE to collectively ensure our agency makes progress towards equity.”

At the Science Committee hearing, Rep. Bowman argued that equity in technology deployment should not be considered separately from R&D, citing energy storage technology designs that he said are better suited to single-family homes than community solar projects. “Incorporating equity from the beginning of the research process will help us avoid technological pathways that only serve a select few. Without every American experiencing the benefits of a good, healthy, zero-carbon life, we will never be able to meet our climate goals,” he remarked.

Bowman also suggested energy justice concerns should be reflected in the distribution of grant funds. He said, “Harvard University received more federal R&D financing than all Historically Black Colleges and Universities combined in 2018. This disparity in federal funding is unacceptable. … To achieve the best solutions, we need a diverse array of experts seated at the table.” On this issue, Bowman also pointed to the DOE Equity in Energy initiative’s goal of strengthening connections between the department’s national labs and minority-serving institutions.

One witness at the hearing, Shobita Parthasarathy, director of the University of Michigan’s Science, Technology, and Public Policy program, criticized what she called a “decide-announce-defend” model that imposes technology on communities, saying a policy of “consult-consider-modify” should be followed instead. She suggested that disparities in the distribution of benefits and harms from technology could be addressed “proactively” if “potentially affected communities and experts in the equity dimensions of innovation are brought into every step of the research and development process, even at the earliest stages.”

Parthasarathy recommended three particular paths of reform: supporting community-based innovation, consulting communities in the development and siting of high-tech projects, and incorporating equity analyses into R&D funding decisions. Describing what an equity analysis would entail, she said it might require grant applicants to “gather information about equity in design, equity in distributional and siting processes, equity in procedure, and historical legacy,” comparing it to environmental impact statements or the broader impacts statements required of applicants for National Science Foundation funds.

The other witnesses more generally stressed the need for social research and community engagement to direct technology development and deployment so that it better addresses the specific problems experienced by underserved communities. Bruno Grunau, regional director of the Cold Climate Housing Research Center in Alaska, pointed to the difficulty of matching housing technology to needs. “We can’t just create a technology and assume it will go out to everyone, just like it’s a matter of checking a box,” he said.

University of California, Berkeley professor of sustainability Dan Kammen discussed research he had conducted that found significant racial and ethnic disparities in the distribution of solar panels across all income levels, saying it was an example of why there should be a “much more nuanced approach to building diversity into the pipeline” of the clean energy transition.

Myles Lennon, a professor of environment and society at Brown University, pointed to the potential of R&D targeted at improving worker conditions, which he said would include research that identifies companies with poor labor and environmental records as well as technology development that would displace those companies in supply chains. As an example, he cited efforts to find substitutes for cobalt and lithium in batteries, which are often obtained under inhumane conditions.

Energy Subcommittee Ranking Member Randy Weber (R-TX), who represents a district on Texas’ Gulf Coast, suggested that energy equity should take into account the role of the fossil fuel industry in providing jobs and affordable energy in places such as rural Texas, which he noted has high poverty levels. Arguing for an “all-of-the-above” energy policy, he said innovation should retain a focus on making established energy sources cleaner and more efficient.

“I think it’s obvious that any plan to completely abandon our current infrastructure and energy sources would obviously be a big mistake,” he remarked.