The Defense Department’s spending on R&D, test, and evaluation is leveling out after several years of rapid growth and funding for early-stage R&D accounts is increasing 5% to $16.9 billion.

Under the Department of Defense’s fiscal year 2021 appropriation, funding for Research, Development, Test, and Evaluation activities is increasing 2% to $111 billion. The relatively small proportional increase caps off a period of rapid growth in which Congress added $45 billion to the annual RDT&E budget after it hit a low-water mark for the past two decades in fiscal year 2014.

Within the RDT&E budget, combined funding for the Science and Technology accounts — Basic Research, Applied Research, and Advanced Technology Development — is increasing 5% to $16.9 billion, bucking the cuts proposed not only in President Trump’s budget request, but also the House’s and Senate’s original spending bills. Army R&D programs are receiving particularly large overall increases this year, while basic research funding across DOD and the services is increasing 3% to $2.67 billion 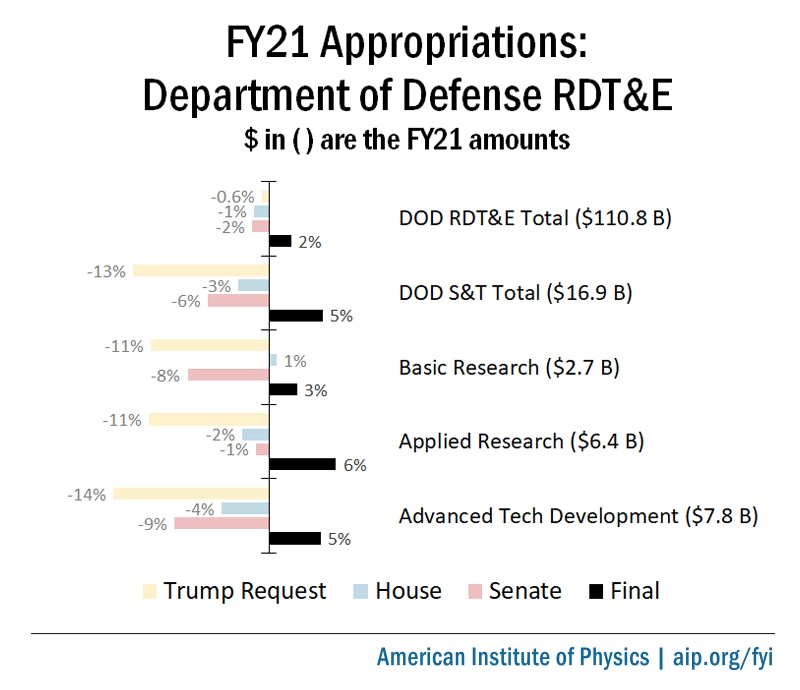 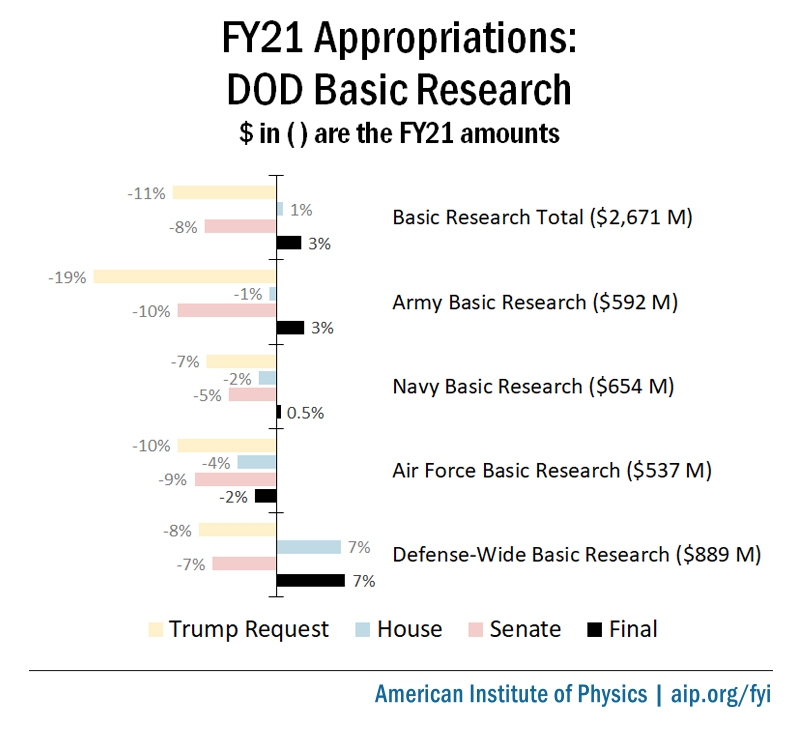 DARPA. While the budget for the Defense Advanced Research Projects Agency is increasing 1% to just above $3.5 billion, funding for the agency’s basic research portfolio is increasing 9% to $530 million.

Defense EPSCoR. Funding for the Defense Established Program to Stimulate Competitive Research is increasing from $12 million to $17 million. DOD requested no funds for the program, which is a congressional initiative and supports projects in states and territories that traditionally receive a lower share of research grant funding.

National Defense Education Program. Following a period of growth, the NDEP budget is decreasing from $144 million to $137 million, owing primarily to the cessation of congressionally directed support for the Manufacturing Engineering Education Program. As in previous years, Congress specifies that $35 million should be allocated for other assorted STEM education and outreach activities on top of DOD’s request, which was $21 million this year. The bulk of NDEP funding will go to the SMART (Science, Mathematics, and Research for Transformation) scholarship-for-service program, for which DOD requested $77 million, continuing a string of increases.

Minority-serving institutions. Funding to support Historically Black Colleges and Universities and other Minority-Serving Institutions is increasing from $53 million to $81 million, continuing a trend of substantial growth. Recently, DOD has used these congressionally directed increases to fund a series of research centers focused on areas such as artificial intelligence, aerospace engineering, and quantum technology. This budget is also funding an ongoing National Academies study on the status of defense research at HBCUs and MSIs.

Missile early warning. The marquee project within the Space Force RDT&E portfolio is the Next-Generation Optical Persistent Infrared (Next-Gen OPIR) early-warning satellite system, which aims to be a more resilient successor to the current Space Based Infrared System (SBIRS). Congress considers the project a test case for using special authorities to accelerate major technology procurements. Accordingly, it is increasing funding for Next-Gen OPIR from $1.47 billion to $2.32 billion, meeting DOD’s request and enabling the procurement to continue on pace. Last May, Northrop Grumman was awarded a contract worth $2.4 billion to develop two polar-orbiting satellites, and in January, following the enactment of the new appropriation, Lockheed Martin was awarded a contract worth $4.9 billion to produce three geostationary satellites. The Space Force aims to launch all five satellites, constituting “Block 0” of the system, by 2029. However, last summer the Government Accountability Office deemed that schedule “highly aggressive and high risk.”

Hypersonics. Congress continues to meet or exceed the budget requests for key hypersonic weapons and defense projects. Funding is more than doubling for the Army’s Long Range Hypersonic Weapon project, from $404 million to $861 million, in support of its goal of fielding an experimental prototype in 2023. To coordinate efforts across the services, Congress is providing $90 million for DOD’s recently established Joint Hypersonics Transition Office. Last year, using its $100 million initial appropriation, the office established a field site at the Naval Surface Warfare Center Crane Division in Indiana and it set up a University Consortium for Applied Hypersonics based at Texas A&M University.

Mobile reactors. Congress is providing $70 million for Project Pele, which is supporting three efforts to design a transportable nuclear reactor, and $10 million for the development of the meltdown-resistant TRISO fuel all three designs would employ. DOD may ultimately choose to support the development of one of the designs into a prototype. However, Congress expresses some concern about the project’s management and directs DOD to provide a report detailing plans for it.

5G telecommunications. Funding for the Next Generation Information Communications Technology program is increasing from $200 million to $430 million, nearly meeting DOD’s request. The program aims to accelerate the development of 5G equipment with dual military and civilian uses, facilitate collaboration with industry and academia on 5G capabilities, and develop means of dynamically sharing spectrum. Outside of established programs, Congress is also providing $10 million for “5G spectrum allocation mitigation” to assess and adapt to interference resulting from equipment operating on bands adjacent to ones used by military equipment. DOD requested $35 million for a new R&D program focused on telecommunications technologies beyond 5G, but Congress has provided only half that amount, stating the request was insufficiently justified. 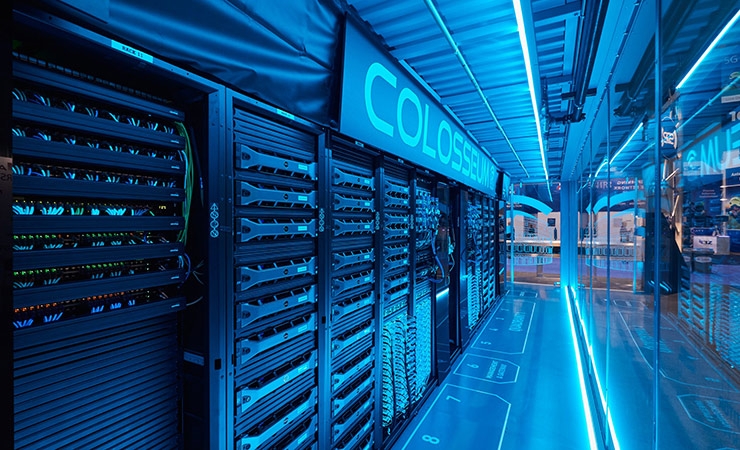 The Colosseum is a testbed for radio experiments that can connect up to 256 radios and simulate how they would transmit, receive, and interfere with each other. The machine was the centerpiece of DARPA’s Spectrum Collaboration Challenge, in which competing teams deploy artificial intelligence and machine learning methods to minimize interference in networks of collaborative, autonomously controlled radio devices.

Quantum technology. Among other programs supporting quantum information science, within the Air Force’s Dominant Information Sciences and Methods program Congress is increasing funding for a new QIS research center from $8 million to $10 million and the allocation for quantum communications research from $4 million to $10 million. In addition, it is providing $7 million for quantum cryptography.

Cooperative Threat Reduction Program. Rejecting the Trump administration’s proposal to reduce funding for the Cooperative Threat Reduction Program from $374 million to $238 million, Congress instead provides $360 million. It provides $98 million more than requested for activities to prevent the proliferation of biological weapons, increasing funding from $204 million to $225 million.

Research security. Congress is increasing funding for the Maintaining Technology Advantage account from $21 million to $26 million, stating that the request of $30 million represented “unjustified growth.” DOD is using the account for several efforts to protect the technologies it funds from exploitation by rival nations, including the development of “Technology Area Protection Plans” that will inform actions such as foreign investment reviews to better tailor them to specific technologies.

Secure capital. Through the National Defense Authorization Act for Fiscal Year 2019, Congress has authorized DOD to establish a program known as National Security Innovation Capital to invest in dual-use hardware startups as a counterweight to venture capital from rival nations. However, the program remains unfunded. The department is continuing to implement another effort it launched in 2019 called Trusted Capital Marketplace, which aims to link technology companies with vetted investors.

High-performance computing. Congress is increasing funding for DOD’s Army-administered High Performance Computing Modernization Program by $3 million to $228 million, which is $40 million more than requested. The explanatory statement notes that DOD’s requests for the program have barely grown over the last decade and observes, “Originally focused on support to science and technology efforts, HPCMP now supports an expansive and ever-growing set of competencies, including digital engineering, virtual prototyping, and virtual testing.” Accordingly, it directs DOD to review the program to determine if it is adequately funded and organized.

AI coordination. Congress expresses concern over “a lack of coordination among the myriad of artificial intelligence programs within the department and the military services.” It therefore directs DOD’s recently established Joint AI Center to provide an “inventory of all artificial intelligence activities” that details each program’s current funding and anticipated funding needs, and identifies their partners in academia and industry.

Strategic Capabilities Office. Funding for SCO is decreasing from $1.19 billion to $793 million. The office is a relatively new entity and, as a core element of DOD’s drive to improve its ability to innovate, it grew rapidly during the latter half of the 2010s. Noting that the office is now transferring some of its programs to the military service branches, Congress directs DOD to provide information that will facilitate congressional oversight of them.