The budget for the National Institutes of Health is increasing by 3% to just under $43 billion for fiscal year 2021, and Congress has provided an additional $1.25 billion for the agency through its latest pandemic response legislation.

The National Institutes of Health is receiving a 3% funding increase in fiscal year 2021, bringing its total budget to just under $43 billion. This is the sixth year in a row the agency has received a boost of over $1 billion. Most of NIH’s component institutes will receive budget increases of between 1.5% and 3%, except for those focused on aging and minority health disparities, which will see significantly larger increases.

Beyond its regular appropriation for NIH, Congress is providing the agency with an additional $1.25 billion through a separate pandemic relief measure to "prevent, prepare for, and respond to coronavirus, domestically or internationally." Of the total, $1.15 billion is for “research and clinical trials related to long-term studies of COVID-19” and the remainder is for rapid diagnostics. These funds add to the more than $3 billion NIH has received through previous pandemic response bills. However, the latest measure does not provide any emergency funding for offsetting disruptions to research projects caused by the pandemic, which the House had sought to include.

An explanatory statement accompanying the legislation provides funding and policy direction, and language from the House Appropriations Committee report conveys additional direction unless specifically negated in the final statement. The Senate Appropriations Committee did not formally submit its report, but language from a publicly released draft is incorporated in the explanatory statement. For summary tables, consult the FYI Federal Science Budget Tracker. 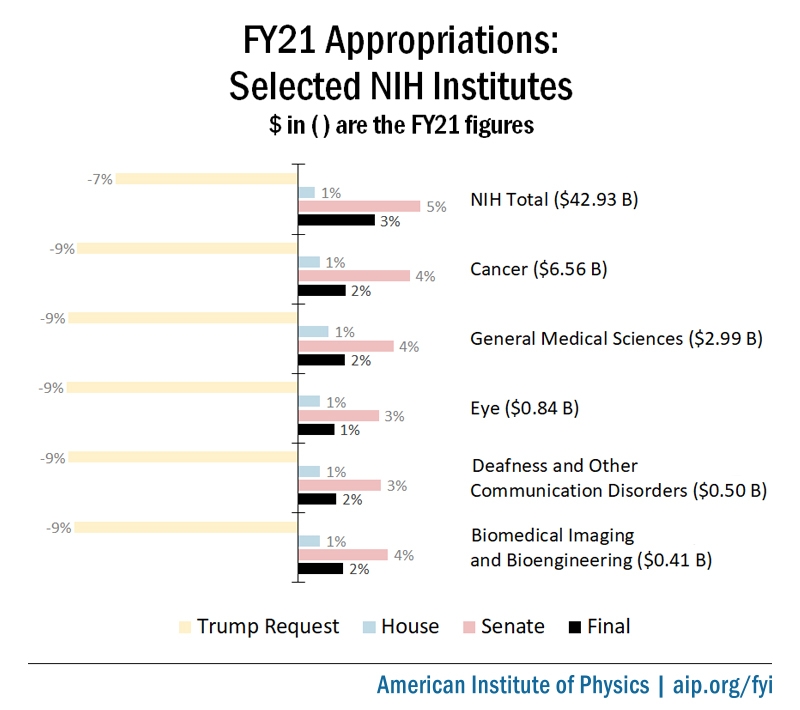 Pandemic response. In addition to the pandemic response funding, Congress provides $40 million through its regular appropriations to be split evenly among NIH’s 12 Regional Biocontainment Laboratories to support a range of disease outbreak preparedness activities, including vaccine development, facility upgrades, and workforce training. More broadly, Congress directs the Department of Health and Human Services (HHS), which oversees NIH, to explore how best practices from the Operation Warp Speed COVID-19 vaccine development program can be applied to other areas of medical research.

Artificial intelligence. NIH’s emerging AI and data science efforts are receiving a substantial funding boost. Funding for the Office of Data Science Strategy is nearly doubling to $55 million, and Congress is providing an additional $50 million for AI-focused research grants. Congress directs NIH to increase access to large AI-ready data sets, establish guidelines for “transparently addressing ethics and bias,” expand data science training programs, and explore ways to increase university participation in national AI efforts. In addition, it supports the use of AI and supercomputing to respond to epidemics, encouraging NIH and its partner biomedical agencies to “maximize” their use of advanced computing resources managed by other federal agencies.

National lab partnerships. The House report encourages NIH to continue coordinating with the Department of Energy and its national laboratories, emphasizing that their supercomputing resources could help address NIH’s “rapidly growing data and computational challenges.” In addition, the final statement urges NIH to “explore novel applications for radiopharmaceuticals and leverage next-generation advanced manufacturing techniques for isotope production being made by DOE-funded research universities and national laboratories.” 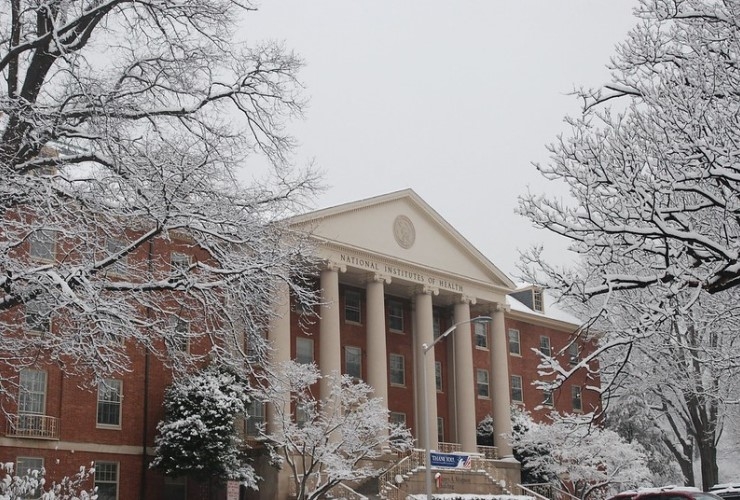 The NIH Campus in Bethesda, MD

Infrastructure modernization. The base amount for the Buildings and Facilities account is remaining flat at $200 million, but Congress is also transferring $225 million from a special fund to support additional facilities projects, as it did last year. In light of a 2019 National Academies report documenting pressing infrastructure needs across NIH, the agency requested base funding of $300 million to help address a backlog of maintenance projects, which it estimates will cost about $2.1 billion in total. While Congress acknowledges the need for “significant investment to modernize NIH's infrastructure,” it expresses concern over NIH’s capital planning processes, which it suggests remain “fragmented and inconsistent.” It directs NIH to establish a unified planning process and designate a senior leader to manage its entire capital portfolio. Congress states that NIH’s establishment of the Research Facilities Advisory Committee is a step in the right direction and stipulates that all projects should be evaluated and ranked by the committee.

Diversity. Registering concern over a “continued lack of diversity at NIH among staff and grantees,” House appropriators direct the agency to develop a strategic plan to address racial, ethnic, and gender disparities among NIH researchers, focusing particularly on reducing barriers in access to grant funding. They also direct NIH to establish a scholarship program that encourages African American students to pursue careers in medicine and biomedical research, citing concerns over the “persistent decline of Black male physicians over the last decade.” Alongside other recent efforts to promote diversity and equity within the biomedical research community, NIH recently launched a cohort hiring program for early-career faculty with an estimated budget of $241 million over nine years.

Harassment. Congress continues to push NIH to do more to prevent sexual harassment in extramural research settings. In last year’s appropriations legislation, Congress directed the agency to institute a policy requiring that institutions notify the agency when “key personnel” are removed from grants due to harassment concerns. In June, the agency updated its guidance on procedures for removing personnel from grants, specifying that requests for personnel changes should note whether the changes are related to concerns about safety or the work environment.

This year, Congress directs the agency to revise the policy to “make clear that grantees must identify any changes to key personnel on an award that are related to concerns about harassment.” The House report further directs NIH to require institutions to notify the agency when principal investigators or co-investigators have been placed on administrative leave or been subjected to any administrative action related to a sexual harassment investigation. NASA and the National Science Foundation have already implemented such a requirement.

In addition, Congress directs NIH to assess the feasibility of developing a mechanism for grantees to report concerns about sex discrimination outside the formal Title IX complaint process, as recommended by the Government Accountability Office, and to clarify how information received through such mechanisms could be used. According to GAO, NIH has already implemented such a system and last September NIH entered into an information-sharing agreement that allows the HHS Office of Civil Rights to investigate reports of harassment.

Research security. Congress reiterates its concern over foreign threats to the U.S. research system, alleging that the Chinese government has used talent recruitment programs to steal intellectual property and obtain confidential information about NIH research grants. The report notes that as of June 2020 NIH had investigated 189 scientists at 87 institutions who were suspected of having unreported foreign ties and found that the vast majority had received undisclosed financial support from China. Accordingly, Congress provides $5 million for the NIH inspector general to pursue additional investigations.