The U.S. Geological Survey’s budget is increasing 4% to $1.3 billion in fiscal year 2021, with most of the additional funding directed to geological mapping, water monitoring, and landslide hazards programs. 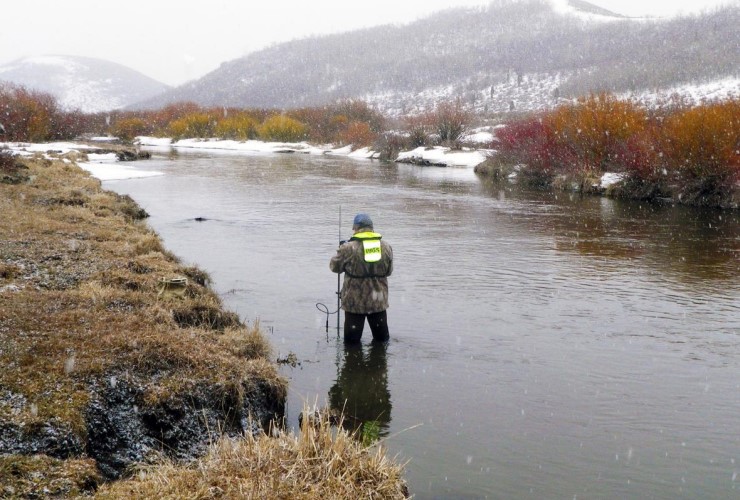 A USGS hydrologic technician measures streamflow in the Blackfoot River near Henry, Idaho, in 2014.

The U.S. Geological Survey’s topline budget is increasing 4% to $1.3 billion under its appropriation for fiscal year 2021, exceeding the levels initially proposed by the House and Senate. Much of the increase is directed to geological mapping and water monitoring programs. Funding is also doubling for landslide preparedness efforts, while programs focused on earthquake, volcano, marine, and geomagnetic hazards will remain mostly level.

An explanatory statement accompanying the legislation provides funding and policy direction, and language from the House Appropriations Committee report conveys additional direction unless specifically negated in the final statement. The Senate Appropriations Committee did not formally submit its report, but language from a publicly released draft is incorporated in the explanatory statement. For summary tables, consult the FYI Federal Science Budget Tracker.

Natural Hazards. Congress doubles funding for the Landslide Hazards Program to $8 million to “address concerns that the potential for a major landslide and subsequent tsunami exists in Prince William Sound, Alaska.” USGS is directed to “conduct data collection and analysis to develop a site-specific landslide hazard assessment and recommendations to support a long-term monitoring strategy.” USGS is also instructed to work with state and local stakeholders and other partner agencies, including the Department of Homeland Security and National Oceanic and Atmospheric Administration, to develop an emergency early warning system for “an impending or actual landslide that could result in a tsunami.”

The Earthquake Hazards Program is receiving essentially level funding of $85 million, of which $26 million is for continued development and expansion of the ShakeAlert earthquake early warning system for the West Coast. Congress also directs that no less than the enacted fiscal year 2020 amount be provided for the national seismic hazard map, including its expansion to Puerto Rico and the Virgin Islands. The Volcano Hazards Program is also provided flat funding of $30 million. Congress states this amount includes “funding necessary for the National Volcano Early Warning and Monitoring System, which will vastly improve, organize, and modernize volcano monitoring efforts in the United States to mitigate volcanic hazards.”

Climate science centers. Congress provides $41 million for the National and Regional Climate Adaptation Science Centers, a $3 million increase and $32 million more than requested. Congress directs that no less than $4 million of the total go toward establishing a new center in the Midwest that is selected through a competitive process.

Water Resources. The budget for the Water Resources mission area, which is responsible for monitoring streamflow, water quality, and water availability, is increasing $29 million to $263 million. Of the total, the Groundwater and Streamflow Information Program is receiving $101 million, a $16.5 million increase that is directed to the Next Generation Water Observing System (NGWOS) at the Hydrologic Instrumentation Facility in Mississippi. NGWOS is a system for collecting and integrating a wide range of water data in real time to support advanced modeling and prediction services. Congress also expresses support for continuing the ongoing pilot of the system in the Delaware River Basin and encourages USGS to further characterize the basin through the National Geologic Mapping Program.

The Water Availability and Use Science Program is increasing $10.5 million to $58 million in support of efforts to improve understanding of water flows at the national and regional level. The explanatory statement comments, “As water resources become increasingly scarce, sound management of groundwater requires a detailed understanding of aquifers' relationships with surface water sources.”

Geologic and geospatial mapping. Congress increases the National Cooperative Geologic Mapping program’s budget by $6 million to $40 million to “accelerate new mapping and sustain Phase Three of the National Geologic Map Database,” per the House report. The project is producing detailed national and continental resolution 2D and 3D information that underpins a range of projects, including the Earth MRI initiative.

Congress maintains funding for the National Geospatial Program at $79 million, specifying that $46 million is for the 3D Elevation Program, which is collecting high-resolution elevation data across the U.S. using lidar. USGS is instructed to “complete 100% coverage of the Great Lakes region, begin expanding coverage to the southeastern United States region, and to include a detailed cost estimate for achieving 100% coverage of that region in the fiscal year 2022 budget justification,” with a goal of achieving national coverage by 2026. Congress also encourages USGS to use program funds to support the implementation of the presidential memorandum titled Ocean Mapping of the United States Exclusive Economic Zone and the Shoreline and Nearshore of Alaska. In addition, it instructs the agency to continue developing digital surface models using unclassified satellite optical data for regions not mapped with lidar.

Biosafety lab renovations. Congress provides $55 million for the first phase of renovations to the National Wildlife Health Center in Wisconsin, stating that it plays an “important role in zoonotic research for detecting novel pathogens and emerging infectious diseases, developing rapid diagnostic tests, conducting disease surveillance, and designing vaccines used to control these diseases.” It adds that the improvements should include “substantial testing resources that will provide surge capacity for processing tests during pandemics.”