The Biden administration is proposing to increase funding for the National Institutes of Health by about 20%, or $9 billion, for fiscal year 2022, largely to support a new $6.5 billion Advanced Research Projects Agency for Health. 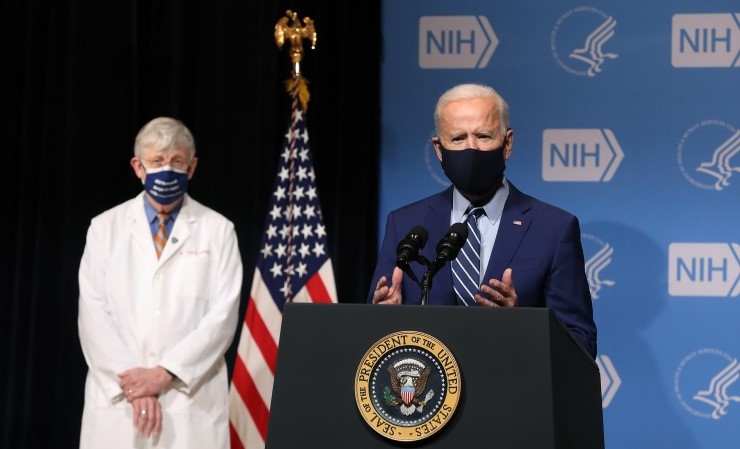 President Joe Biden delivering remarks alongside NIH Director Francis Collins during a visit to the National Institutes of Health in February.

Funding for the National Institutes of Health would increase by roughly 20% to $51 billion under the Biden administration’s fiscal year 2022 budget request, accelerating a six-year trend of multi-billion-dollar annual budget increases.

Of the $9 billion increase, $6.5 billion would go toward establishing a new entity called the Advanced Research Projects Agency for Health (ARPA–H), which NIH states would be empowered to make fast-paced and risky funding decisions in a bid to develop transformative capabilities and address “market failures.”

Total funding for the remainder of NIH’s programs would increase by 6% under the request, with each institute receiving an increase of at least 2.7%. The institutes dedicated to minority health disparities and the environmental health sciences would receive particularly large boosts, reflecting the administration’s prioritization of efforts to address racial inequity and climate change.

Selected figures from the discretionary request are available in FYI’s Federal Science Budget Tracker and highlights are summarized below. 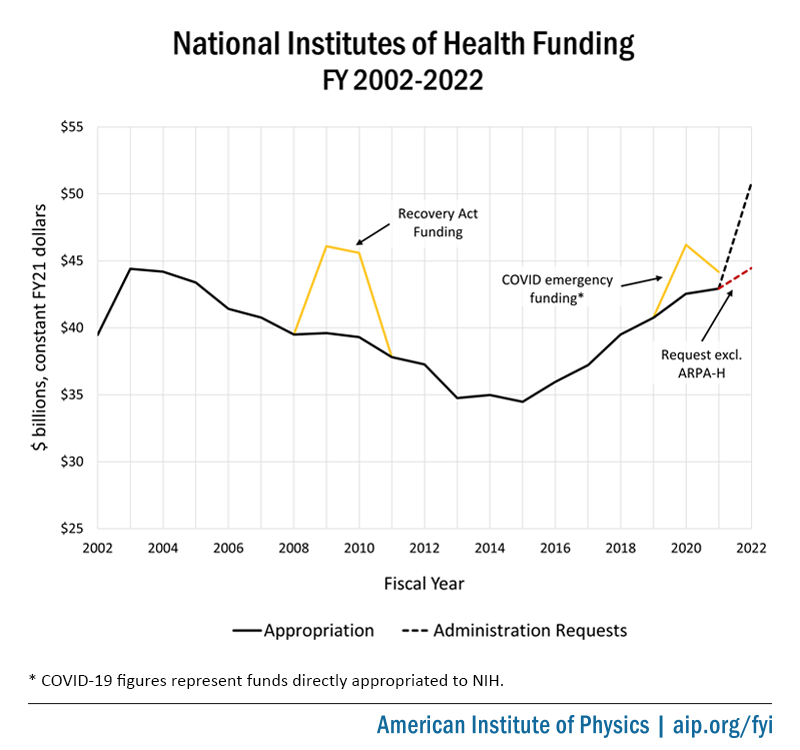 NIH states ARPA–H would employ “term-limited program managers who can identify and fund traditional and non-traditional partners,” drawing on the management approach pioneered by the Defense Advanced Research Projects Agency. It adds that ARPA–H would not have an intramural research program and would mostly fund researchers in industry, universities, and non-profit institutions.

NIH proposes that ARPA–H initially focus on developing “platforms and capabilities to deliver cures for cancer, Alzheimer’s disease, diabetes, and other diseases.” As examples of potentially transformative capabilities, it points to the possibility of developing a universal method for targeting drugs to specific cell types, which it describes as a “zip code for the human body.”

As evidence for the benefits of a nimbler approach, NIH points to the success of its Rapid Acceleration of Diagnostics (RADx) program that helped speed development of COVID-19 tests after receiving an emergency appropriation of $1.5 billion from Congress.

The ARPA–H concept has already been embraced by some lawmakers. The top Republican on the Senate appropriations subcommittee responsible for NIH, Sen. Roy Blunt (R-MO), specifically endorsed the idea last month, saying the success of the RADx program and Operation Warp Speed helped convince him of the proposal’s merit. In the House, Reps. Fred Upton (R-MI) and Diana DeGette (D-CO) have indicated that they intend to incorporate the ARPA–H proposal into legislation they are drafting as a follow-up to the 21st Century Cures Act of 2016.

However, the advocacy group Research!America has questioned the size of the initial budget request for ARPA–H, arguing Congress should prioritize increasing funding for existing NIH programs. In addition, House and Senate appropriators asked NIH Director Francis Collins probing questions at recent hearings about the large size of the request for ARPA–H and how the agency would interact with NIH’s existing institutes.

For instance, House Appropriations Committee Chair Rosa DeLauro (D-CT) pressed Collins on the difference between ARPA–H and NIH’s National Center for Advancing Translational Sciences. Collins replied that ARPA–H “takes the NCATS model and puts it on steroids” and suggested the two entities could be merged. Subcommittee Ranking Member Tom Cole (R-OK) noted that DARPA only has an annual budget of $3.5 billion and suggested a more gradual ramp up would be prudent. Collins noted that the administration is proposing that the initial budget be spent over three years. The budget request states that this flexibility will “allow for both scale-up in fiscal year 2022 and redeployment of resources in the next two years if projects fail to meet performance milestones.”

Asked by Senate Subcommittee Chair Patty Murray (D-WA) how the DARPA program manager model would complement NIH’s peer-review system, Collins replied that it would help the agency support “collaborative ventures that include organizations and small businesses that might otherwise not be likely to write an NIH grant.” He added that he envisions hiring “perhaps 100” program managers and appointing a director for the agency who would serve a five-year term, with the possibility of one renewal.

The budget request states that ARPA–H would also have a federal advisory panel that will “provide an avenue for interagency coordination and idea generation,” but notes that funding decisions will be made exclusively by the program managers and the director.

Climate change. The request includes $100 million in new funds for research on the health impacts of climate change. Most of the money would support extramural research efforts aimed at understanding health-related climate vulnerability and building health resilience, with “special attention to the impact on vulnerable health disparities populations.” The administration has requested a similar amount for the Centers for Disease Control and Prevention’s Climate and Health program and is planning to create a new Office of Climate Change and Health Equity within the Department of Health and Human Services, NIH’s parent department.

Racial equity. NIH proposes to increase funding for its scientific workforce diversity office by $16 million to $22 million. The office leads NIH’s UNITE initiative, launched in February, which seeks “to identify and address structural racism within the NIH community and the greater biomedical research community.” Among its priorities, the NIH-wide collaboration will work to attract and retain scientists from underrepresented groups, address disparities in grant success rates, and increase the transparency of workforce demographic data. The office also helps oversee a recently launched cohort hiring program for early-career faculty.

Infrastructure modernization. To address an ongoing maintenance backlog, NIH proposes to increase the Buildings and Facilities account by $50 million to $250 million. On top of this account’s budget, Congress transferred $225 million last year from a special fund to support additional facilities projects. The budget request includes a provision that would allow NIH to transfer up to 1% of its other appropriations into the Buildings and Facilities account to fund additional projects. NIH has indicated the backlog currently totals nearly $2.5 billion.