Within a flat overall budget for the National Nuclear Security Administration, the Biden administration proposes to ramp up funding for plutonium production while paring back certain stockpile R&D activities, such as inertial confinement fusion.

The Biden administration is proposing to hold the budget of the National Nuclear Security Administration steady at $19.7 billion for fiscal year 2022, following a string of increases that began during the Obama administration and accelerated under President Trump.

Over the past five years, NNSA’s budget has increased by more than 50% overall, primarily to support the modernization of the U.S. nuclear weapons stockpile and associated infrastructure. The Biden administration proposes to continue these efforts, leaving any major changes until after conducting a nuclear posture review, a policy-setting exercise typically undertaken near the beginning of a new presidency.

Within its requested flat topline, the administration proposes to ramp up funding for efforts to reconstitute plutonium production capabilities while paring back certain stockpile R&D activities, including the inertial confinement fusion program, which recently underwent an internal review that concluded it is unlikely to achieve fusion ignition with its current capabilities. Funding for nuclear nonproliferation programs would remain steady at $2.3 billion, with some increases proposed for targeted R&D activities.

Detailed figures are available in FYI’s Federal Science Budget Tracker and highlights are summarized below. 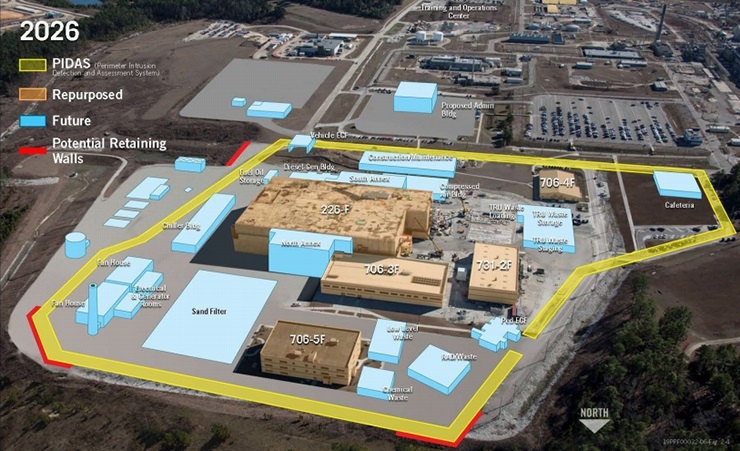 A draft site plan for a plutonium production facility at the Savannah River Site in South Carolina. (Image credit – NNSA)

Per a statutory requirement, NNSA is expanding its ability to manufacture the plutonium cores of nuclear weapons, known as “pits,” to replace aging ones in the existing stockpile and hedge against potential future threats. Since the 1989 closure of its Rocky Flats facility in Colorado, NNSA has lacked the ability to mass produce pits and is working to reconstitute such capabilities at Los Alamos National Laboratory in New Mexico and the Savannah River Site in South Carolina.

Pressed to explain the increase at a recent hearing, Acting NNSA Administrator Charles Verdon said the initial figure was a “top-down” estimate that has since been refined with input from project staff. On June 28, NNSA approved the conceptual design for the project and set a preliminary cost range of $6.9 billion to $11.1 billion. It estimates the project will be completed sometime between 2032 and 2035.

NNSA’s Stockpile Research, Technology, and Engineering (RT&E) portfolio comprises programs used to certify the safety and reliability of the nuclear warhead stockpile as well as complementary activities that sustain the weapons design and maintenance workforce. The administration proposes to pare back the Stockpile RT&E budget by 4% to $2.7 billion, with cuts focused on Inertial Confinement Fusion, Assessment Science, and Academic Programs. 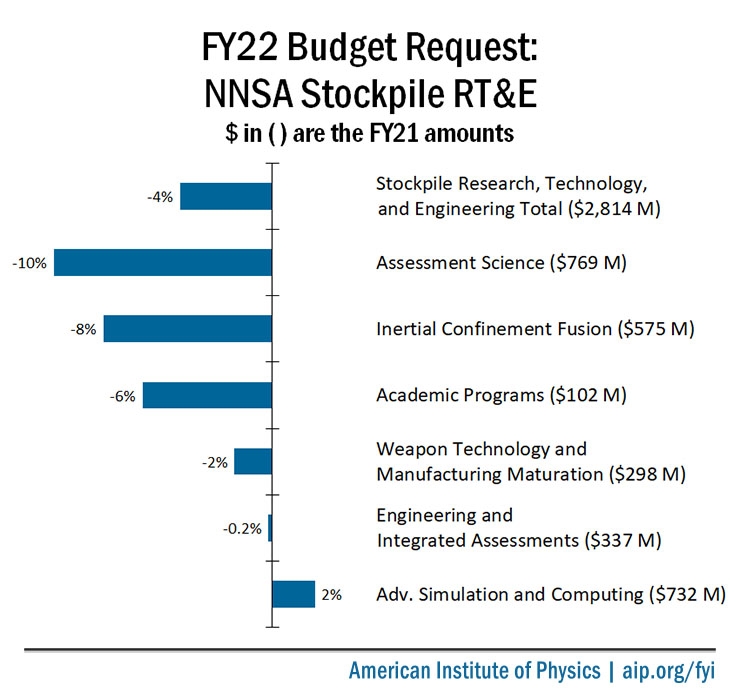 Inertial Confinement Fusion. The ICF program budget would drop $46 million to $529 million under the request, more than reversing the $19 million increase Congress provided for fiscal year 2021.  NNSA states the decrease "reflects the forward funding in FY 2021 for acceleration of FY 2022 scope."

NNSA notes it is reorienting the ICF program based on an internal review and a congressionally mandated external review conducted by the JASON science advisory panel. It reports that the internal review concluded the aim of achieving fusion ignition is “likely beyond current experimental capabilities” and recommended the program focus on “resolving key gaps in physics understanding and acquiring information at the current scales to justify cost, scope, and schedule for any future investments in experimental capability.” It adds that the JASON review “found that the program remains valuable to the stewardship mission and recommended several shifts in program strategy to optimize scientific progress over the next decade.”

Accordingly, NNSA states it intends to implement some high-priority recommendations from the reviews, such as renewing emphasis on the “fundamental physics of ignition” and supporting “planning for a future high-yield capability.”

Assessment Science. The budget for the Assessment Science program would drop 10% to $690 million under the request, which states the cut “reflects a reallocation to higher-priority NNSA programs and projects.” Congress boosted the program’s budget by nearly 30% for fiscal year 2021 in part to increase funding for efforts to develop new capabilities for conducting subcritical experiments, which are explosive tests that do not generate nuclear yield. The administration proposes level funding of $216 million for the Enhanced Capabilities for Subcritical Experiments subprogram, which is building a facility capable of rapidly imaging the late stages of plutonium implosions.

Stockpile Responsiveness Program. The administration requests level funding of $70 million for the Stockpile Responsiveness Program, which Congress created in 2017 to offer lab personnel opportunities to exercise a broader range of skills associated with the weapons lifecycle than those required by stockpile maintenance. NNSA states it would use part of the funding to continue a congressionally mandated design competition for a “potential future strategic missile warhead exploring different manufacturing approaches and [stockpile to target sequence] environments compared to today’s systems.”

Nonproliferation workforce. In 2020, NNSA established a Nonproliferation Stewardship Program to help ensure it has the foundational technical capabilities and workforce needed to address emerging threats, such as advances in manufacturing technology that provide new means of illicitly producing nuclear weapons. The administration proposes to increase the program’s budget by nearly 50% to $87 million to accelerate “testbed development addressing immediate capability shortfalls in support of nonproliferation missions.” The increase would also support “development of a modern computing ecosystem that supports advanced material production modeling and simulation capabilities in the Department of Energy laboratory complex.”

Proliferation detection. Funding for the Proliferation Detection program would increase 6% to $269 million under the request in support of a new “emerging and disruptive technologies initiative” as well as “new arms control and warhead verification and monitoring R&D activities to advance expected arms reduction technical frameworks and enable improved vulnerability assessments.”

Low-enriched uranium fuel. The administration seeks to terminate a $20 million R&D program created by Congress that is developing low-enriched uranium (LEU) alternatives to the highly enriched uranium (HEU) fuels currently used by nuclear-powered naval vessels. The request does not explain the proposal, but the Navy has previously stated that such a fuel would be impractical and costly for it to use.

Mo-99 production. NNSA requests no funds for cooperative agreements with companies that are developing HEU-free domestic sources of the medical radioisotope molybdenum-99. Congress provided $50 million for the effort last year and NNSA anticipates the funds will be sufficient for continuing activities, estimating that at least two companies will be able to produce Mo-99 in the U.S. by the end of 2023. It adds, “The last major Mo-99 global producer is expected to convert to 100% LEU Mo-99 production in FY 2022, ending the need for the assistance in converting international Mo-99 facilities from using HEU to LEU targets.”

Cesium cleanup. As part of its Domestic Radiological Security program, NNSA helps hospitals transition away from using blood irradiators that contain the radioactive isotope cesium-137. Congress has provided extra funding to the program in recent years to clean up cesium spilled during the removal of a blood irradiator from a medical center in Seattle. NNSA states the $27 million cut proposed for the program reflects the completion of those activities.