The Biden administration proposes to increase the National Oceanic and Atmospheric Administration topline budget by a third to just under $7 billion in fiscal year 2022, focusing on expanding the agency’s climate research programs, developing a more distributed weather satellite architecture, and launching diversity and equity initiatives.

In its fiscal year 2022 budget request for the National Oceanic and Atmospheric Administration, the Biden administration proposes to boost total funding for the agency by nearly a third to just under $7 billion.

The administration’s priorities include expanding climate research programs, developing a more distributed weather satellite architecture, and launching diversity and equity initiatives. Of the roughly $1.5 billion increase, $368 million would be for improving environmental observation and forecasting systems, $149 million for strengthening core research capabilities, and $58 million for initiatives focused on advancing equity and environmental justice.

Detailed figures from the discretionary request are available in FYI’s Federal Science Budget Tracker and highlights are summarized below. 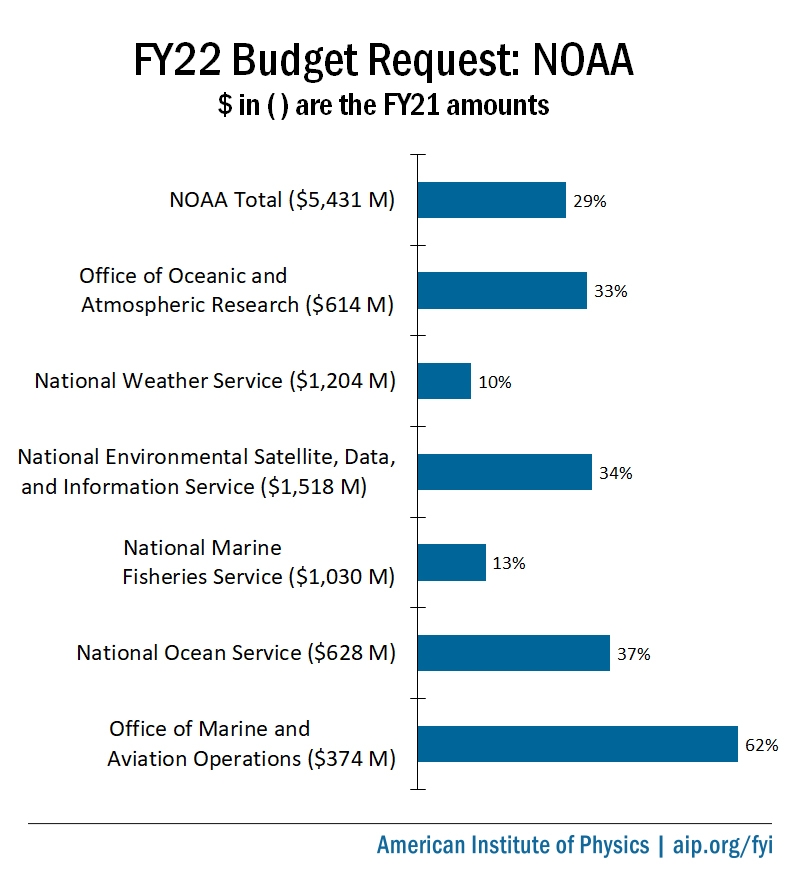 The budget of NOAA’s Office of Oceanic and Atmospheric Research would increase by a third to $816 million, with much of the additional funding directed to establishing new climate research activities and bolstering ocean and coastal resilience programs. Weather research programs would see a smaller proportion of the increase. 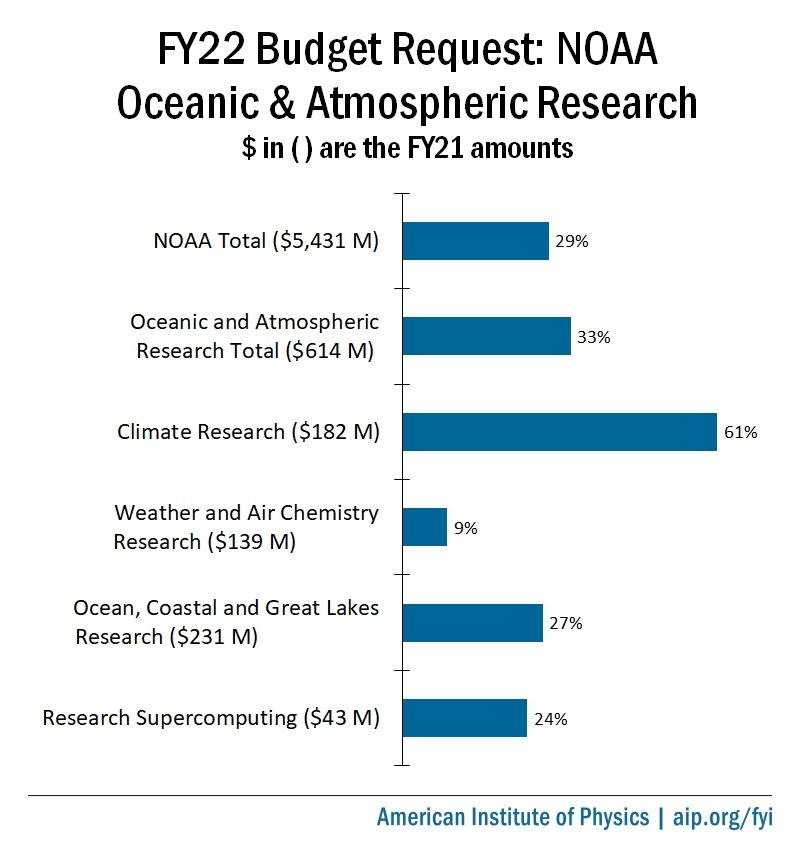 Climate research. The budget for the Climate Research division would increase $112 million to $294 million. Of the increase, $67 million would go to the Climate Competitive Research program, which issues grants to NOAA research laboratories and external institutions.

The program would allocate $40 million of the increase to the Advanced Research Projects Agency for Climate that the administration is proposing to establish with a total initial budget of $500 million drawn from across various federal agencies. NOAA’s contribution would support R&D on ways to sequester carbon emissions in coastal and marine ecosystems.

The remainder of the increase would support research on marine ecosystem responses to climate change, a “grand challenge” effort to improve precipitation predictions, and an initiative to extend regional climate change projections out to 2050. NOAA explains the initiative would “develop standardized and accessible climate projections with society-relevant data delivery services to improve climate risk information equity and assist decision making across a wide range of stakeholders and economic sectors.”

In addition, NOAA requests a $10 million increase through a separate account to establish two new teams under its Regional Integrated Sciences and Assessments program, which offers tailored climate risk information to state and local decision-makers. The funds would also go toward establishing a Climate-Smart Communities Initiative that would help train 20 cities around the U.S. in resilience-building.

Internationally, NOAA proposes to take on a leading role in assembling the Global Stocktake, a mechanism for assessing progress towards achieving the emissions reduction goals of the Paris Agreement. Accordingly, NOAA requests a $20 million increase for sustained atmospheric observations supported by its climate laboratories and cooperative institutes. The funds would go toward activities such as expanding observational platforms for emissions monitoring and better characterizing allowable amounts of emissions under different scenarios.

Weather research. The budget for the Weather and Air Chemistry Research division would increase $12 million to $152 million under the request. Of the increase, $7 million would support a new Fire Weather Testbed that would bring together emergency managers and NOAA researchers to develop decision-support tools and models that help protect lives and property and predict air-quality impacts. Most of the remainder would support the design of a new phased array weather radar.

NOAA does not specify a budget for its recently launched Earth Prediction Innovation Center, which will host a code development sandbox to help external researchers contribute to NOAA’s models. The agency announced in May that it had selected Raytheon Intelligence and Space to design and develop the center.

Ocean and coastal research. NOAA proposes to increase funding for the Ocean, Coastal, and Great Lakes Research division budget by $64 million to $295 million. The National Sea Grant College Program would receive a $35 million increase to expand research and engagement with coastal communities on natural hazards resilience and an additional $5 million to support partnerships with Minority Serving Institutions. Most of the remaining increase for the division would be used to deploy additional ocean observation platforms such as Argo floats and buoys. NOAA specifically plans to expand coverage in the tropical Pacific, North Atlantic, Arctic, Gulf of Mexico, and off the coast of southern California.

Supercomputing. Funding for the sustainment of supercomputing systems would increase from $43 million to $54 million under the request. NOAA states the increase would enable it to provide “dedicated funding support” for the Hera supercomputer in Fairmont, West Virginia, which was initially funded through a supplemental appropriation. Hera is one of five NOAA supercomputers used for R&D and recently underwent an upgrade that more than doubled its computing power.

NOAA is requesting just over $2 billion, a $511 million increase, for the National Environmental Satellite, Data, and Information Service (NESDIS), which manages the acquisition of next-generation weather satellites. The boost would support initiatives to develop a more distributed satellite architecture, as recommended by a major study that NESDIS completed in 2018. NOAA also commits to not requesting more than inflationary increases above that level in future years, stating that within a stable budget of $2 billion it would make “trade-offs within and between observation portfolios to avoid cost growth.”

Budget restructure. To enable such trade-offs, NOAA proposes to consolidate budget lines into more general accounts organized around geostationary satellites, low Earth orbit satellites, and space weather observations. The agency explains that under NESDIS’ current budget structure “resources, products, and offices are bound to specific satellite missions,” which it argues leads to “higher acquisition costs due to an inability to balance risks across observation sets.”

Geostationary satellites. Two of the four weather satellites in the Geostationary Operational Environmental Satellite (GOES) – R series have already launched, with the third, GOES-T, scheduled to launch in December and GOES-U in 2024. NOAA requests steady funding of $336 million for the GOES acquisition program and $455 million in new funding for the recently created Geostationary and Extended Orbit (GeoXO) program, which will develop the satellites that will succeed the GOES-R series in the 2030s. Through the program, NOAA plans to consider distributed architecture concepts that involve “hosting on commercial spacecraft, commercial data purchases, and the use of multiple small low Earth orbit satellites to meet very low latency observational requirements typically met by geostationary satellites.”

GOES-T, the third in a series of next-generation geostationary weather satellites, underwent vibration testing at a Lockheed Martin facility in Colorado.

Polar-orbiting satellites. NOAA requests $78 million to create a Low Earth Orbit Weather Satellite program to develop a small-satellite constellation that will complement and ultimately replace the large polar-orbiting weather satellites the agency currently relies on. NOAA anticipates it will be able to develop and deploy these small satellites “much more quickly” than those in the current Joint Polar Satellite System (JPSS) series.

The second of four satellites in the JPSS series has a preliminary launch commitment date of late 2022 and the third a commitment date of early 2027. The budget for the JPSS program is set to ramp down significantly in the coming fiscal year due to a change in when the launch vehicles will be purchased.

Space weather monitoring. NOAA is developing new platforms to monitor solar winds and coronal mass ejections through the Space Weather Follow On program, for which it requests a $39 million increase to $147 million. The program will place a solar observatory at the L1 Lagrange point as well as a compact coronagraph on the GOES-U satellite, replacing capabilities currently provided by the Solar and Heliospheric Observatory (SOHO) and Deep Space Climate Observatory (DSCOVR) spacecraft, which are past their design lifetimes.

NOAA also requests $55 million to create a Space Weather Next program that will “sustain, improve, extend, and mitigate potential gaps in observations.” Plans include developing a compact coronagraph for an upcoming European Space Agency mission to the L5 Lagrange point and exploring options for obtaining additional data through partnerships.

Commercial weather data. NOAA requests $18 million to expand its purchase and piloting of commercially collected weather data for ingestion into operational weather models. The request notes that the agency is operationalizing purchases of radio occultation data and is considering piloting other types of commercial data, with the final purchase amounts dependent on data price, quality, and availability.

“Hurricane Hunter” aircraft. NOAA requests $100 million to purchase an additional aircraft capable of flying into hurricanes, citing a statutory requirement that it maintain backup capabilities. The agency notes its current backup aircraft is owned by another agency and lacks certain data collection systems.

Education Office. The budget for NOAA’s Office of Education would increase by $8 million to $41 million under the request, with $3 million allocated to creating a Climate Cooperative Science Center led by a Minority Serving Institution. The center would train post-secondary students in climate science and related multidisciplinary fields.