In support of her nomination to be under secretary of defense for research and engineering, Heidi Shyu answered questions this week from the Senate Armed Services Committee about matters such as defense innovation priorities and research security. 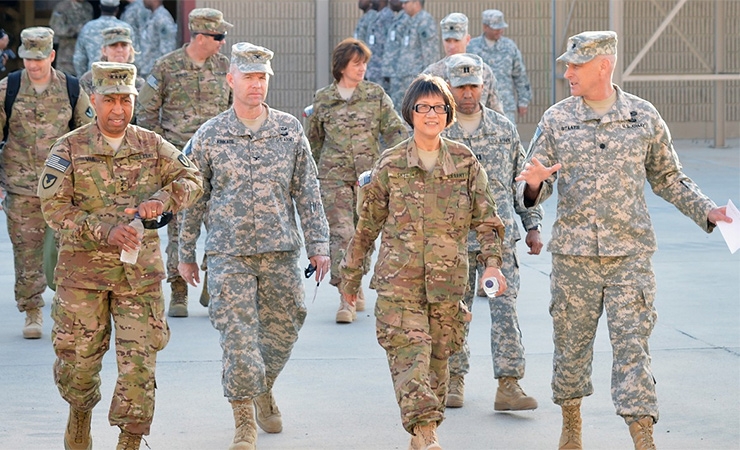 Heidi Shyu visiting a Kuwait-based Army field support battalion in 2014, when she was assistant secretary of the Army for acquisition, logistics, and technology.

Engineer Heidi Shyu found a warm reception this week when she appeared before the Senate Armed Services Committee for a hearing on her nomination to be under secretary of defense for research and engineering (R&E). Also known as the Department of Defense’s chief technology officer, the under secretary oversees all aspects of the department’s sprawling R&D, test, and evaluation portfolio.

Pending her confirmation by the full Senate, Shyu is poised to be the second person to hold the position after Congress elevated it out from within DOD’s procurement bureaucracy in late 2016. That move was part of a bid by lawmakers to increase the department’s focus on pathbreaking technologies and to free risky development activities from the risk-averse practices of defense procurement. Bolstering defense innovation has remained a major congressional priority in the four years since then.

Shyu was responsible for both R&D and procurement when she served as the Department of the Army’s assistant secretary for acquisition, logistics, and technology from 2012 to 2016. At her hearing and in responses to written questions from the committee, she offered her views on how DOD can best support technology innovation and on the tensions between supporting open research environments and protecting research from misappropriation, among other subjects.

To stay up to date on nominations to key positions across the government, consult FYI's Federal Science Leadership Tracker.

In her opening statement, Shyu noted that she was born in Taiwan and that her family’s connections to the U.S. stretch back to the two years her grandfather spent in the U.S. training to be an air force squadron commander during World War II. She reflected, “I came to this country at the age of eleven and a half … and I am extraordinary grateful for the tremendous opportunities that I have had in my career.”

After that, Shyu built her career in the defense industry, working at Hughes Aircraft Company, Litton Industries, and Grumman Aerospace Corporation, before holding a series of management roles at Raytheon. These included positions focused on electromagnetic systems, unmanned combat vehicles, space and reconnaissance systems, and the Joint Strike Fighter program.

From 2000 to 2010, Shyu served as a member of the Air Force Scientific Advisory Board, and was its chair from 2005 to 2008. She moved into the federal government in 2010 as the Army’s principal deputy assistant secretary for acquisition, logistics, and technology, and took on the assistant secretary role in an acting capacity in 2011, before President Obama nominated her for the job in 2012.

Since leaving the government in January 2016, Shyu has worked as a private consultant and served on various corporate boards, including that of the Aerospace Corporation, a federally funded research and development center.

Introducing Shyu via video, former Defense Secretary Ash Carter highlighted her past experience as making her well suited to mediate the relationships between DOD and the military service branches, and between the military and the private sector. “America’s secret sauce in the competition with China’s communist statism is a set of independent outside research, training, industry, and investment communities, all with a strong coupling to DOD’s in-house research and engineering infrastructure,” he said.

Shyu struck similar notes in her own remarks. Calling China the “pacing threat for the U.S. military,” she said DOD should harness the nation’s innovative capabilities to stay ahead, including by strengthening collaborations with commercial and academic partners. She warned, “DOD should avoid replicating private-sector research and should focus its investments on the innovative technologies that DOD uniquely needs but that the commercial sector is not developing on its own.”

Today, sustainment makes up 70% of total weapon system cost, with development and procurement making up 30%. DOD should strive to flip this ratio and invest more in the development of new technologies than it does in the sustainment of legacy systems.

In her responses to written questions, she elaborated that advanced materials technologies could increase the efficiency and reliability of equipment while reducing maintenance and fuel consumption, and that technologies such as additive manufacturing could help reduce supply-chain storage needs.

Committee Chair Jack Reed (D-RI) asked Shyu about potentially reforming DOD’s Planning, Programming, Budgeting, and Execution (PPBE) framework, which structures program management across the department. Reed argued, “It’s been with us since the ‘60s with [Defense Secretary Robert McNamara]. It was a model that was appropriate for the industrial age, but we’re in a post-industrial age.”

Shyu agreed that PPBE can be a hindrance to rapidly fielding new technologies. She explained, “Part of the problem is, to transition into a program of record, [the technology] has to be in the POM [program objective memorandum] ahead of time, and the POM is a two-year process. Therefore, unless you had the foresight two years ago to understand that the technology is going to be mature within two years’ time, to plan it into your POM, there’s a two-year gap … in terms of our ability to buy the latest technology.”

No senators asked Shyu about basic research or research security at the hearing, but she detailed her views on those issues in response to written questions.

Shyu noted that the proportion of DOD’s “Science and Technology” budget devoted to basic research has been “steadily decreasing” in recent years and is now less than 16%. Observing that the Council on Competitiveness advocacy group, the National Academies, and others have recommended it should be at least 20%, she stated she would evaluate the situation and potentially recommend changes if “deemed appropriate.”

On research security, Shyu wrote that she felt DOD has been “well served” by National Security Decision Directive 189, a presidential policy that holds the products of “fundamental research,” meaning basic and applied research, should be free from security controls “to the maximum extent possible.” She further stated,

If confirmed, I would continue to promote the execution of fundamental research free from restrictions on publications or participation by individuals such as foreign nationals.

Responding to another question probing the tension between “open innovation” and “protecting such research from undue foreign interference,” she reiterated that “fundamental research benefits from open collaboration and the perspectives of exceptional researchers, regardless of their country of origin.” However, she qualified, “The application of research for specific military uses should be protected from undue foreign interferences.”

Concerning that distinction, she elaborated, “I understand universities have communicated to DOD that inconsistencies in fundamental research designations and the application of fundamental research policy have resulted in research delays. In an era of increasing international competition for scientific breakthroughs, DOD cannot afford these delays.”

Asked about appropriate ways to protect academic research from “undue foreign influence, without singling out researchers from certain nations,” Shyu wrote, “To protect this research, DOD should promote transparency through disclosure of actual or potential conflicts of interest and commitment. DOD should encourage universities to promote education and training in scientific ethics to include research integrity, conflicts of interest and commitment. Early-stage researchers who fulfill these requirements accurately and completely should be welcomed in the defense research enterprise.”