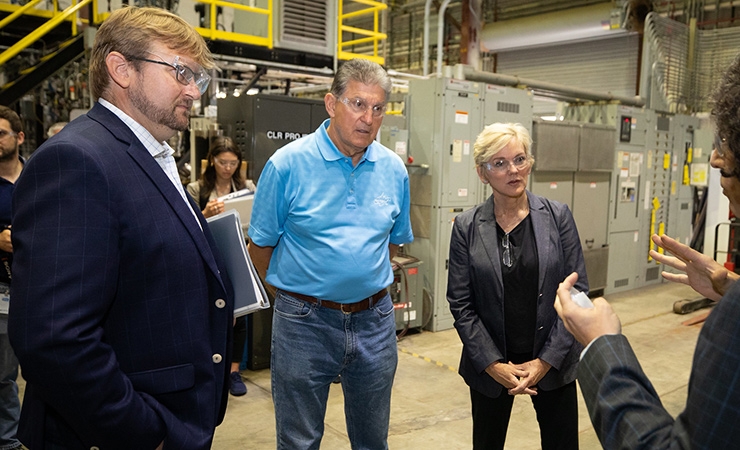 Update: Shortly after this bulletin was published, the Senate Energy and Natural Resources Committee released a new version of Manchin's bill that made some updates to its funding proposals, which are now reflected in this bulletin's text. The new version also transformed the bill's proposals from direct appropriations into funding recommendations that would add to or supersede previously enacted recommendations. That change is not reflected in this bulletin's text. The bill's proposals could still be incorporated as appropriations into a special spending package, or they could be passed as policy provisions that do not directly appropriate funds. Manchin's original bill is posted here.

Efforts in Washington, D.C., to advance special infrastructure spending legislation have focused in on a framework that was assembled by a bipartisan group of 10 senators and is endorsed by President Biden. The framework excludes the R&D spending proposals included in Biden’s American Jobs Plan. However, one of the framework’s architects, Senate Energy and Natural Resources Committee Chair Joe Manchin (D-WV), has also drafted a separate spending bill that would provide almost $95 billion for infrastructure activities under his committee’s jurisdiction, including billions of dollars for energy R&D and technology demonstrations (RD&D).

Manchin has not indicated if he intends for these proposals to be added onto the bipartisan framework or included in a separate package that Senate Democrats would pass using the budget reconciliation process. He has, though, expressed reluctance to use reconciliation to circumvent negotiations with Republicans. If Democrats proceed with that tactic, including his priorities in their reconciliation package could prove key to securing his support.

At a committee hearing on June 24, Manchin said he hopes his bill will garner bipartisan support, remarking, “With the right strategy, reinvesting in our nation's infrastructure can … strengthen the economy, create jobs, boost our competitiveness, and help tackle climate change. Although I don't anticipate we will all agree on the size or scope of investment necessary to do this, I think all of my colleagues will agree that the areas within our jurisdiction are an important piece of the broader conversation about our infrastructure needs.”

For his part, Committee Ranking Member John Barrasso (R-WY) endorsed the bill’s focus on certain activities, including carbon capture technology and advanced nuclear reactor demonstration projects. However, he warned against pursuing a partisan reconciliation process and complained that committee Republicans had not been consulted on the bill and that its price tag is too large. “I'm aware of no precedent where this committee appropriated anything close to the $100 billion included in this draft bill,” he said.

The committee is meeting to further consider the bill on July 14. 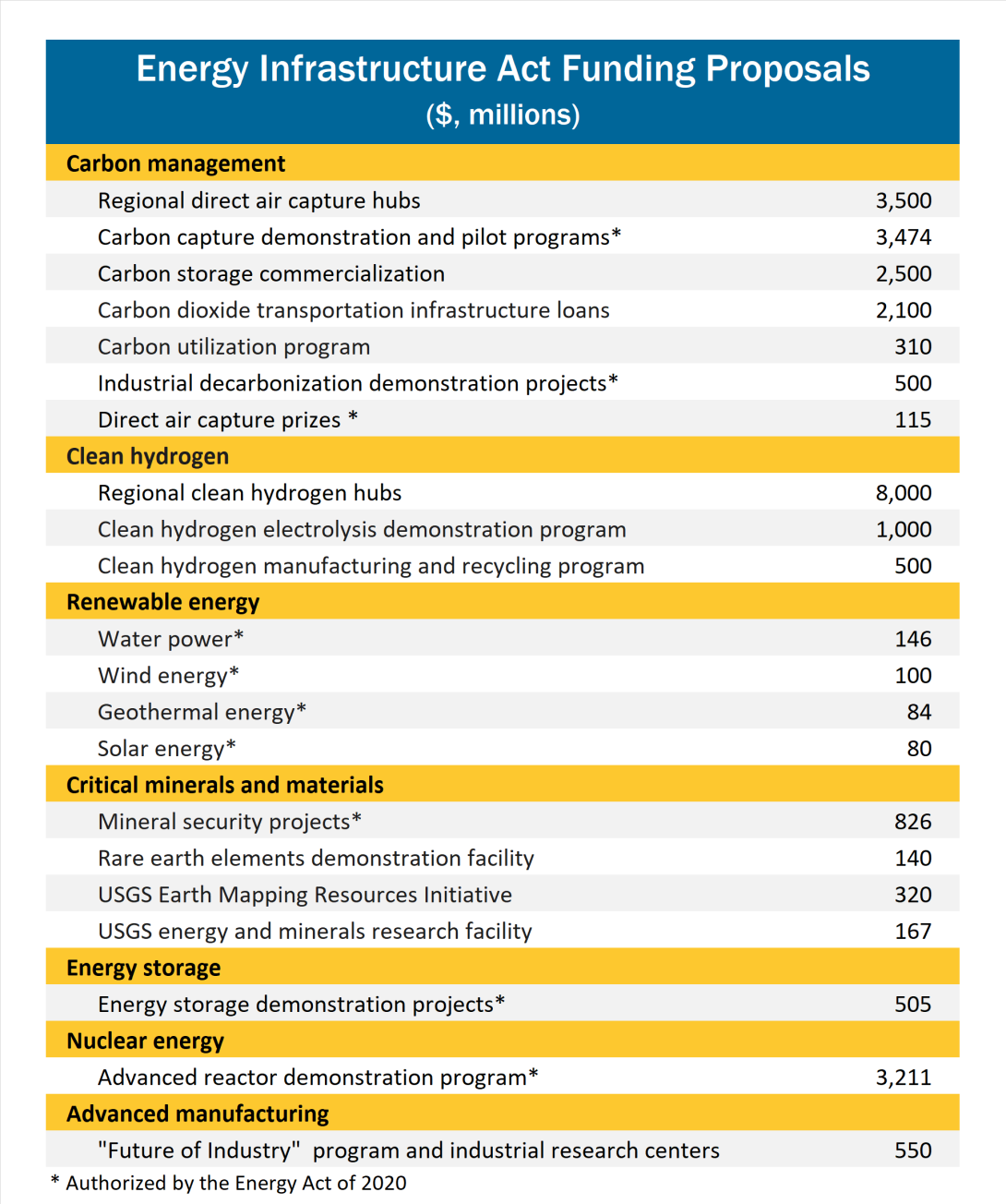 A significant portion of the RD&D spending proposed in Manchin’s draft bill, which is titled the Energy Infrastructure Act, would provide up to six years of funding for many of the projects and programs authorized in the Energy Act of 2020. Manchin was one of the Senate’s main sponsors of the act, alongside Sen. Lisa Murkowski (R-AK), who was then chair of the Energy and Natural Resources Committee and is now one of the 10 senators behind the bipartisan infrastructure framework. Other programs that Manchin's new bill would fund were not part of the Energy Act and are proposed for the first time in the bill.

Carbon capture projects. The draft bill would provide in total more than $2.5 billion over five years for carbon capture demonstration projects and $937 million for large-scale carbon capture pilot projects, close to the amounts recommended in the Energy Act.

Carbon storage commercialization. The bill would provide $2.5 billion over five years for a carbon storage commercialization program that was not included in the Energy Act. The program would fund “new or expanded commercial large-scale carbon sequestration projects and associated carbon dioxide transport infrastructure, including funding for the feasibility, site characterization, permitting, and construction stages of project development.”

Carbon utilization. The bill would create a grant program to aid state and local governments and public utilities or agencies in procuring and using products that are derived from anthropogenic carbon dioxide and provide it with more than $300 million over five years. The program would complement carbon utilization activities authorized in the Energy Act.

Direct air capture prizes. The bill would provide $15 million for a prize competition for “precommercial carbon dioxide capture from dilute media,” and $100 million for a competition for commercial applications of technologies that capture carbon dioxide directly from the air. Those amounts would be made immediately available and are equal to those recommended in the Energy Act. The bill does not include funding for the Direct Air Capture Test Center, which the Energy Act requires the Department of Energy to establish and is included in the Biden administration’s fiscal year 2022 budget request.

Regional direct air capture hubs. The bill includes a total of $3.5 billion for four “regional direct air capture hubs” that would be created over the next four years, of which at least two would be located in “economically distressed communities” in coal or shale gas-producing regions. The hubs would consist of “a network of direct air capture projects, potential carbon dioxide utilization off-takers, and connective infrastructure located in close proximity.” They would have the capacity to capture and sequester at least one million metric tons of carbon dioxide per year. The hub program was not included in the Energy Act.

Hydrogen. The bill includes extensive policy guidance for DOE’s hydrogen RD&D activities and directs the department to “develop a national strategy and roadmap to facilitate widescale production, processing, delivery, storage, and use of clean hydrogen.” It would provide $500 million over five years for research programs focused on clean hydrogen manufacturing and recycling, as well as $1 billion to support hydrogen electrolysis demonstration projects that aim to bring costs down to less than $2 per kilogram by 2026. In addition, the bill would provide $8 billion to establish four regional clean hydrogen hubs to “demonstrate the production, processing, delivery, storage, and end-use of clean hydrogen.”

Manufacturing programs. The bill would establish a “Future of Industry” program that was not included in the Energy Act and provide it with $150 million over five years. Among its activities, the program would set up academic centers to help manufacturers implement technologies for applications such as energy management, “smart” manufacturing, and cybersecurity. The bill would provide an additional $400 million for project implementation grants for manufacturers.

Energy storage. The bill would provide $505 million over five years to support energy storage pilot projects and a long-duration demonstration initiative that would be pursued jointly with the Defense Department. The bill does not include general funding for other energy storage RD&D, which would receive increased funding under the Biden administration’s fiscal year 2022 budget request.

Nuclear energy. The bill would provide more than $3.2 billion for the Advanced Reactor Demonstration Program through fiscal year 2027, exceeding the amounts recommended in the Energy Act. In addition, the bill would establish a “civil nuclear credit program” and fund it at $6 billion over five years to provide temporary financial support for commercial nuclear reactors that are projected to close due to economic factors.

Demonstrations on mine land. The bill would direct DOE to establish a program to carry out clean energy demonstration projects on current and former mine sites and provide $500 million to support up to five such projects. At least two of the projects would be for solar energy demonstrations and the remainder could be for projects in geothermal energy, micro-grids, energy storage, advanced nuclear technologies, direct air capture, and fossil fuel electricity generation with carbon capture.

Critical minerals and materials. The bill includes a number of provisions aimed at bolstering domestic supply chains for minerals and materials frequently used in energy technologies. It would provide $140 million for a demonstration of a “full-scale integrated rare earth element concentrator and refinery” and $826 million for mineral security programs authorized by the Energy Act. In addition, the bill would provide $320 million across five years for the U.S. Geological Survey’s Earth Mapping Resources Initiative (Earth MRI) and $167 million for a university-based, USGS-funded “energy and minerals research facility.”