Biden Proposes Over $200 Billion for R&D in Infrastructure Plan

President Biden unveiled an infrastructure plan today that proposes spending more than $200 billion to boost the R&D capacity of the U.S., including by creating a technology-focused directorate within the National Science Foundation and a new national lab focused on climate. 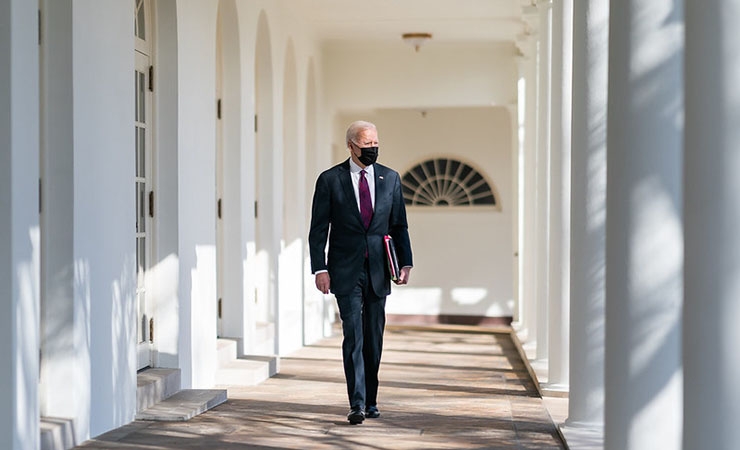 Today, President Biden released an outline of his roughly $2 trillion infrastructure spending plan, which includes more than $200 billion for R&D-focused initiatives. He proposes Congress distribute the spending over eight years and cover the costs over 15 years by increasing corporate taxes. The plan is an opening bid in negotiations with Congress, which is gearing up to consider a host of related legislation.

Justifying the scale of spending, the White House states, “Like great projects of the past, the president’s plan will unify and mobilize the country to meet the great challenges of our time: the climate crisis and the ambitions of an autocratic China.” The plan also places an emphasis on engaging more of the country in the conduct of R&D, proposing an array of regional economic development programs and dedicated funding streams for Minority Serving Institutions (MSIs).

In a speech today, Biden lamented how federal spending on R&D as a share of U.S. gross domestic product has fallen to about 0.7% from its peak of about 2% during the Apollo era, echoing remarks he made last week. He said the infrastructure plan aims to “boost America’s innovative edge in markets where global leadership is up for grabs, markets like battery technology, biotechnology, computer chips, clean energy.”

The plan proposes providing $50 billion to the National Science Foundation and creating a “technology directorate” within the agency, stating the idea is “based on bipartisan proposals.”

Currently, there are two competing bipartisan bills in Congress that would add a new directorate to NSF. The Endless Frontier Act, championed by Senate Majority Leader Chuck Schumer (D-NY), proposes creating a “Directorate for Technology” funded at $100 billion over five years, while the House Science Committee’s NSF for the Future Act proposes creating a “Directorate for Science and Engineering Solutions” funded at $13 billion over five years.

Biden’s plan states the new directorate would “collaborate with and build on existing programs across the government” and would “focus on fields like semiconductors and advanced computing, advanced communications technology, advanced energy technologies, and biotechnology.” These match priority technology areas identified in the Endless Frontier Act.

Schumer’s office issued a statement on the plan today highlighting that it “includes key elements” of the Endless Frontier Act. Schumer has not yet reintroduced the bill and is expected to release an updated version in April. House Science Committee Chair Eddie Bernice Johnson (D-TX) also issued a statement on the plan, calling it a “great start.”

Articulating a need to engage more of the country in cutting-edge industries, the plan states,

Half the jobs in our high growth, high wage sectors are concentrated in just 41 counties, locking millions of Americans out of a shot at a middle-class job. … In order to win the 21st century economy, President Biden believes America must get back to investing in the researchers, laboratories, and universities across our nation. But this time, we must do so with a commitment to lifting up workers and regions who were left out of past investments.

Accordingly, it proposes initiatives focused on broadly improving research infrastructure and capacity, with a particular eye toward supporting rural regions and MSIs such as Historically Black Colleges and Universities (HBCUs).

Research infrastructure upgrades. The plan proposes $40 billion for “upgrading research infrastructure in laboratories across the country, including brick-and-mortar facilities and computing capabilities and networks.” Half of the funds would be reserved for MSIs and a portion would go toward creating “a new national lab focused on climate that will be affiliated with an HBCU.”

MSI-specific initiatives. The plan proposes spending $15 billion to create up to 200 “centers of excellence” at MSIs that would “provide graduate fellowships and other opportunities for underserved populations, including through pre-college programs.” It also proposes another $10 billion go toward supporting R&D projects at MSIs.

Regional innovation hubs. The plan proposes $20 billion go toward creating at least ten “regional innovation hubs” and a “Community Revitalization Fund.” The hubs would “leverage private investment to fuel technology development, link urban and rural economies, and create new businesses in regions beyond the current handful of high-growth centers.” The fund would support “community-led redevelopment projects that can spark new economic activity, provide services and amenities, build community wealth, and close the current gaps in access to the innovation economy for communities of color and rural communities that have suffered from years of disinvestment.”

A separate provision proposes an additional $30 billion go toward “R&D that spurs innovation and job creation, including in rural areas.” It does not specify whether the funding would be channeled through a particular agency.

NIST initiatives. The plan includes $14 billion for the National Institute of Standards and Technology to “bring together industry, academia, and government to advance technologies and capabilities critical to future competitiveness.” It specifically proposes Congress “quadruple” funding for NIST’s Manufacturing Extension Partnership to increase the participation of “minority-owned and rurally-located small- and-medium-sized enterprises.” MEP’s current annual budget is $150 million.

Small business innovation. The plan proposes spending $31 billion on “programs that give small businesses access to credit, venture capital, and R&D dollars.” It adds these funds would support “community-based small business incubators and innovation hubs to support the growth of entrepreneurship in communities of color and underserved communities.”

Education initiatives. As part of a $100 billion effort to upgrade the public school system, the plan proposes equipping schools with “technology and labs” necessary to prepare students for “jobs of the future.” The plan also proposes spending $48 billion on “workforce development infrastructure and worker protection.” An unspecified portion of the money would go toward creating “career pathway programs in middle and high schools, prioritizing increased access to computer science and high-quality career and technical programs that connect underrepresented students to STEM and in-demand sectors through partnerships with both institutions of higher education and employers.”

Biden proposes spending hundreds of billions to upgrade energy and transportation infrastructure to help decarbonize the economy and increase resilience to climate change. Among these initiatives, the plan states $35 billion would go toward R&D on “the full range of solutions needed to achieve technology breakthroughs that address the climate crisis and position America as the global leader in clean energy technology and clean energy jobs.”

In addition, an unspecified portion of the total funding would go toward launching an Advanced Research Projects Agency focused on climate, ARPA–C, a proposal Biden first advanced during his campaign for president. The plan states the new agency would “develop new methods for reducing emissions and building climate resilience, as well as expanding across-the-board funding for climate research.”

Semiconductor manufacturing. The plan proposes spending $50 billion to implement the recently enacted CHIPS for America Act. Among its provisions, the law authorizes the Commerce Department to provide subsidies to domestic semiconductor manufacturers and establish a National Semiconductor Technology Center, operated as a public-private consortium with participation from NSF, the Department of Energy, and the Department of Defense. More broadly, the plan proposes creating a new office at the Commerce Department that would be dedicated to “monitoring domestic industrial capacity and funding investments to support production of critical goods.”

Pandemic preparedness. The plan proposes spending $30 billion over four years on “medical countermeasures manufacturing; research and development; and related biopreparedness and biosecurity.” It adds the funding would support efforts to “shore up our nation’s strategic national stockpile; accelerate the timeline to research, develop and field tests and therapeutics for emerging and future outbreaks; accelerate response time by developing prototype vaccines through Phase I and II trials, test technologies for the rapid scaling of vaccine production, and ensure sufficient production capacity in an emergency; enhance U.S. infrastructure for biopreparedness and investments in biosafety and biosecurity; train personnel for epidemic and pandemic response; and onshore active pharmaceutical ingredients.”

R&D tax incentives. The plan proposes to reform the way the tax code “promotes research and development.” It explains, “This starts with a complete elimination of the tax incentives in the Trump tax law for “Foreign Derived Intangible Income” (FDII), which gave corporations a tax break for shifting assets abroad and is ineffective at encouraging corporations to invest in R&D. All of the revenue from repealing the FDII deduction will be used to expand more effective R&D investment incentives.”