The National Institute of Standards and Technology has concluded that a serious incident early this year at its research reactor can be traced to mistakes made by its staff, which has suffered from a loss of experience following several years of increased turnover.

An illustration of fuel elements inside NIST’s research reactor, represented by the small squares. A radiation release occurred on Feb. 3 due to the fuel element in position J7 (outlined in red) being improperly latched during refueling. Refueling is generally performed at the reactor on a 50-day cycle and involves replacing four elements and shuffling the other 26.

The National Institute of Standards and Technology sent a report to the Nuclear Regulatory Commission last week that analyzes the root causes of an incident on Feb. 3, when the research reactor NIST operates released radiation into the surrounding facility. According to the report, during a routine refueling operation inexperienced staff members failed to identify an improperly secured fuel element that, when the reactor restarted, led to a disruption in coolant flow, causing the element to overheat and deform.

NIST explains that the reactor is refueled manually and that, despite safeguards, hands-on experience is needed to ensure certain steps of the process are performed properly, including latching. NIST also points out in the report that turnover has led to a decline in the aggregate experience of the reactor’s staff and that trainees have recently had less opportunity to participate in refueling operations due to the pandemic.

The root-cause analysis is a key step toward restarting the reactor, which has been offline since the incident. The reactor is the heart of the NIST Center for Neutron Research (NCNR), a national facility that typically serves more than 2,500 researchers annually. Nearly half of all neutron-scattering research in the U.S. takes place at the center and it is the nation’s preeminent source for “cold” neutrons, which travel at slow speeds and are optimal for certain kinds of experiments.

Detailing NCNR’s staffing situation, NIST’s report states that since 2015 a total of 15 licensed reactor operators have either retired or left the center and that most years the agency has hired several operator candidates as replacements.  It also notes NIST hired a new chief of reactor operations in 2019 who then left in 2020 and that the reactor has since had three interim chiefs. 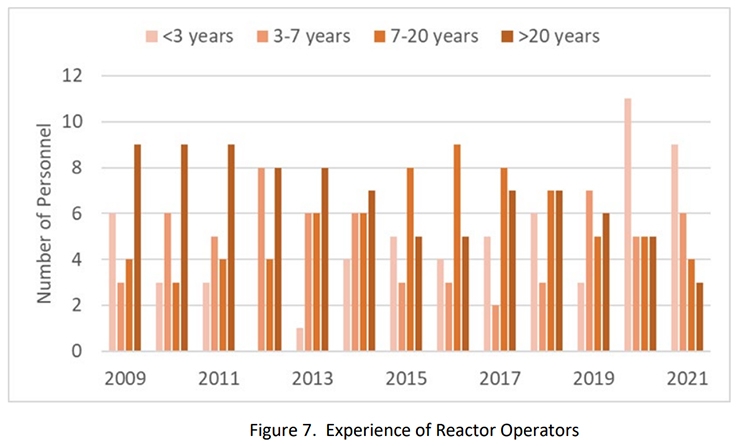 A figure from NIST’s root-cause analysis report charting the decline of experience in its reactor operators in recent years.

It explains that to refuel the reactor operators must stand atop it and use specialized tools to maneuver fuel elements into their latched position without being able to visually observe their placement inside the reactor. According to the report, all trainees practice fuel-handling using a mockup test stand, but the latching process cannot be simulated on the stand and must be learned during actual refueling.

When NCNR was closed during the early phases of the pandemic, trainees had no opportunities to participate in refueling operations. During that time, NIST postponed operator licensing exams twice at the Nuclear Regulatory Commission’s request, until finally giving one in June 2020, relying on “discussion and observation on the practice stand by the shift supervisor” to assess qualifications for fuel handling. The report states, “As a result, there were four individuals that received an operating license without ever having performed actual fuel movements on the reactor top.”

In addition, the report states that, because of the declining experience of reactor operators, “NCNR started a transition from knowledge-based performance to a greater reliance on written procedures,” an initiative overseen by the chief of reactor operations who left in 2020. The report documents that certain aspects of fuel latching and latch checking were not captured in written procedure. It also observes that the latch-check process was “not stressed” during fuel-handling training.

Series of mistakes made in runup to incident

NIST’s report documents that the critical errors leading to the radiation incident occurred during a refueling operation on Jan. 4, 2021, a month before the reactor was started up. On that day, a trainee was atop the reactor learning how to move fuel and had difficulty undertaking a “height check” to ensure it was properly latched.

Quoting notes taken during post-incident interviews, the report states, “A licensed operator resumed control and was able to ‘wiggle’ the tool into proper position. The height check passed after moving the tool into position. Both operators stated they believe the element was latched or at least partially latched upon completion of the procedure. One operator stated that it is difficult to verify the steps of the procedure without the ‘feel’ while visually watching.”

After completing the refueling, the operators were replaced by the next shift, comprising two trainees and one of the operators who had not performed a refueling operation before being licensed. The supervisor for that shift had also been recently promoted and had only performed four latch checks previously.

According to the report, video surveillance footage and interviews revealed that the crew performed follow-up latch checks improperly. They used their tools incorrectly, failed to consult written procedures, and attributed an aberrant height check to new tools that were known to handle differently from the old ones. The newly licensed operator subsequently stated they were unaware that an improperly latched fuel element could result in a radiation incident.

After the Jan. 4 refueling, reactor startup was postponed to Feb. 3 due to concerns that NCNR personnel were exposed to COVID-19. During that interval, the reactor’s coolant pumps were started and stopped 44 times to maintain appropriate temperatures. The report states it is believed that those actions moved the fuel element further out of place.

NIST’s procedures call for checks to be performed after the pump is started for the last time prior to restarting, but the report notes the requirement is not captured in training and that operators were prone to missing it, particularly given the unusual number of times the pumps were run.

When the reactor was started up, it did not exhibit the same magnitude of power oscillations that had uncovered previous cases of unlatched elements in 1981 and 1993. As it ramped up to full power, rising radiation readings prompted an immediate emergency shutdown and the sealing of the reactor facility.

NIST has reported that the radiation exposure of NCNR personnel remained within regulatory limits and that there was only a very small and fleeting increase in radiation in the environment outside the facility. Aside from the one deformed fuel element, the reactor was undamaged.

Other NIST facilities also under strain

NIST’s report enumerates 15 corrective actions that NCNR is taking to prevent a repeat incident, mainly involving changes in training and procedure. Nuclear Regulatory Commission approval to restart the reactor will follow external reviews of NIST’s analysis and actions, the full implementation of those actions, the filtering of fission products from the reactor’s coolant, and the completion of an NRC inspection.

A specific timetable for restarting the reactor has not been determined. In the meantime, researchers will continue to work around the facility’s absence. Researchers have reported that the shutdown has led them to further analyze past data, seek out time at comparable facilities in and outside the U.S., and use alternative experimental methods that may be less well-suited for their work, such as ones that employ X-rays rather than neutrons.

In a statement, interim NIST head James Olthoff remarked on the report, “We take these findings very seriously, as they are absolutely not consistent with NIST’s dedication to safety and excellence. We have already begun implementing many corrective actions and I’m confident that these changes will strengthen our program and ensure the safe operation of this important national resource for years to come.”

Notwithstanding NIST’s response to the current incident, the agency remains under considerable strain due not only to staff turnover but also aging facilities across its campuses in Maryland and Colorado.

In its latest budget request to Congress, NIST notes that its backlog of deferred maintenance now amounts to over $800 million, which is comparable to its entire annual budget. This has left some of its facilities in a dangerous situation. “Numerous major utility infrastructure systems are currently in critical condition, creating risks of catastrophic failure of entire laboratory buildings,” the agency warns.