Research Recovery Left Behind as Pandemic Bill Sprints Ahead

The $1.9 trillion pandemic relief package that is advancing rapidly through Congress does not include the research recovery funds proposed in the bipartisan Research Investment to Spark the Economy Act. 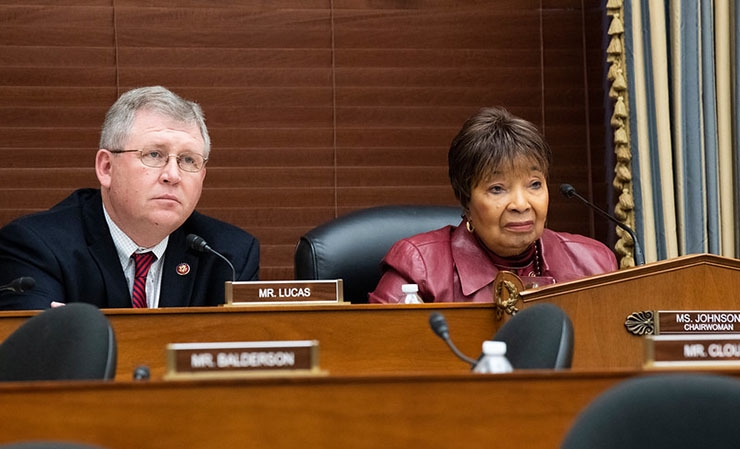 House Science Committee Ranking Member Frank Lucas (R-OK) and Chair Eddie Bernice Johnson (D-TX) at a hearing in 2019. Both have lamented that the latest pandemic bill does not include more to help researchers recover from the pandemic.

The House passed a $1.9 trillion pandemic response and recovery package on Feb. 27 that includes several billion dollars to support coronavirus-related R&D but little of the funding some lawmakers are seeking to address disruptions to research.

In crafting the legislation, congressional Democrats have focused on supporting public health measures and providing broad economic stimulus. Republicans, though, have objected to the measure’s price tag and advocated for a more targeted bill, with some arguing it should include the roughly $25 billion for research recovery activities proposed in the bipartisan Research Investment to Spark the Economy (RISE) Act.

Senate Democrats plan to pass the package this week using budget reconciliation, a procedure that cannot be filibustered and thus requires only a majority vote. As the Senate is expected to modify the bill, the House will have to pass it again, but Democrats are aiming to have it ready for President Biden to sign before enhanced unemployment benefits expire on March 14. There has been no public indication of whether the Senate will consider any amendments related to research spending.

Of the research funding in the package, most is for the Centers for Disease Control and Prevention, while $600 million is for the National Science Foundation, and $150 million is for the National Institute of Standards and Technology. It also includes $100 million for the Institute of Education Sciences to research “learning loss” among K–12 students due to the pandemic and $45 million for the U.S. Fish and Wildlife Service to develop a national wildlife disease database and improve early detection of outbreaks.

Speaking on the floor a month ago about the allocation, Science Committee Chair Eddie Bernice Johnson (D-TX) remarked, "$750 million represents just a fraction of what is needed, including to recover all the science and, more importantly, the talent that is hemorrhaging from the STEM pipeline as a result of this crisis. I will continue to push for such funding as part of the stimulus discussions."

Later, during debate over the package, Committee Ranking Member Frank Lucas (R-OK) argued that it treats science as an “afterthought” and protested that the committee did not hold a meeting that would have allowed Republican members to propose changes.

Committees that received a larger share of the total did consider amendments. During one such meeting held by the House Energy and Commerce Committee, which has jurisdiction over biomedical agencies, Rep. Fred Upton (R-MI) proposed adding $10 billion for the National Institutes of Health in accord with the RISE Act.

However, Committee Chair Frank Pallone (D-NJ) opposed the move on the grounds it would siphon funds from other priorities, such as CDC activities. He noted for instance that the package contains more than $5 billion for vaccine research, manufacturing, and distribution, as well as $1.75 billion for genomic sequencing and surveillance.

“For the specific purpose of trying to crush the virus, the CDC is the best to do that,” he said, and noted that the agency can choose to share the research funds with NIH and the Biomedical Advanced Research and Development Authority.

Aside from the research funding, the bill also provides $40 billion in general relief for higher education institutions. Commenting on this figure, a group of university associations wrote, “While this amount falls short of our most recent estimate of at least $97 billion in student and institutional needs (and is far less than the $183 billion identified in a recent independent estimate) it represents the largest federal effort so far to address the crippling impact of the pandemic on colleges and universities.”

Last week, the House Science Committee held a hearing to build a case for Congress to provide additional research recovery funding, highlighting the added pressure from growing competition with China.

Johnson said in her opening statement, “Even before the pandemic, years of stagnant funding dramatically eroded our standing as the leader in science and innovation, with countries like China nipping at our heels. It is not enough to recover simply to maintain the status quo — we must grow the research enterprise so we can boldly tackle the urgent challenges ahead of us.”

Lucas remarked, “The Chinese Communist Party is determined to overtake us in the industries of the future — areas of science and technology that will drive economic growth and national security in the years to come. The longer our research remains stalled, the more likely it is we will fall behind our foreign adversaries on technologies like artificial intelligence, quantum information sciences, [and] advanced manufacturing.”

Both said they would continue to advocate for the RISE Act and the Supporting Early-Career Researchers Act, which would recommend NSF spend $500 million over two years on a new fellowship program that would provide early-career researchers funds to work for two years at an institution of their choosing. The program would aim to “forestall the loss of research talent likely to occur if early-career researchers are forced to seek employment outside of research due to the sharp economic decline caused by the COVID–19 health crisis.”

As evidence of the disruptions caused by the pandemic, Johnson and Lucas both referenced a report from a university association that estimates the U.S. lost between 20% and 40% of its overall research output across universities from March 2020 through February 2021. Johnson also cited a new report from the American Physical Society that analyzes drops in the number of abstracts submitted to its 2021 virtual March meeting relative to its 2020 March meeting, which was planned as an in-person meeting. (APS is an AIP Member Society.)

APS found that the net number of abstracts submitted to the 2021 meeting by U.S. researchers declined about 9%, with the subset related to experimental work declining about 20%, suggesting research requiring people to operate equipment in-person has been especially impacted. It also found that the number of abstracts submitted by U.S. early-career women declined about 15%, about twice as much as the percentage decrease in the number submitted by men in the same category. Accordingly, APS suggests science agencies prioritize recovery funds to researchers with family-care demands as well as to experimentalists where appropriate.

Discussing the uneven impact of the pandemic, Johnson remarked, "Women researchers have taken on the majority of the additional childcare responsibilities that have arisen due to the pandemic. This has resulted in slower research progress for women compared with their male counterparts, which threatens to widen the gender gap in STEM faculty representation, reversing years of incremental progress."