President Biden has nominated University of California, Merced biogeochemist Asmeret Berhe to lead the Department of Energy Office of Science, which oversees a fleet of scientific user facilities and a multi-billion dollar basic research portfolio. 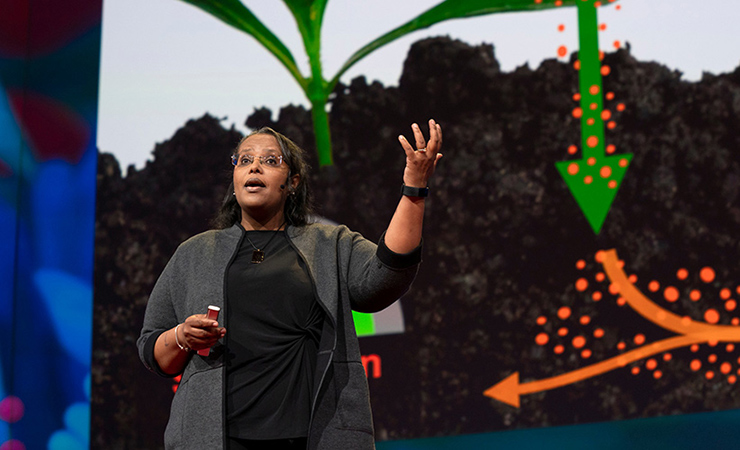 Asmeret Berhe delivering a talk at a TED conference in 2019.

President Biden announced on April 22 that he is nominating Asmeret Berhe to be director of the Department of Energy’s Office of Science. With a $7 billion annual budget, the office is the federal government’s largest funder of fundamental research in the physical sciences.

Berhe is a biogeochemist at the University of California, Merced, who researches interactions between organic matter in the soil and environmental shifts such as climate change. This focus aligns with the Biden administration’s climate agenda as well as activities supported through the Office of Science’s Biological and Environmental Research program.

In addition to Berhe’s climate expertise, Biden’s announcement also highlights Berhe’s work to foster diversity and equity in the geosciences. Pending her Senate confirmation, she will be the first person of color to lead the Office of Science.

Originally from Eritrea, Berhe grew up during the country’s war of independence with Ethiopia. At an American Geophysical Union meeting in 2018, she reflected on how that experience shaped her career, beginning with her decision to study soil science at the University of Asmara after the war ended. She further related that when she finished her degree in 1996, she decided to pursue advanced studies in political ecology at the University of Michigan, focusing on land degradation problems associated with landmines.

Berhe observed that although most activism around the landmine issue focuses on the casualties they inflict, both exploded and unexploded landmines also have various effects that prevent productive use of the land. She remarked,

As a scientist, then, when you’re doing this kind of work it’s extremely frustrating. I have no control over the kind of political forces that shape [issue] frameworks and movement agendas. But at least doing the kind of work that I did, I found it to be consequential more than anything that I’ve ever done as a scientist because at least I’m able to convey a message of how these relatively cheap, easily accessible, very widely used weapons cause very long-term environmental damage with significant consequences for societal and regional development.

After receiving her master’s degree in 2000, Berhe pursued doctoral work at the University of California, Berkeley, where she first began to focus on the relations between soil and climate change. During this time, she was also affiliated with Lawrence Berkeley National Lab and the U.S. Geological Survey and undertook research at Pacific Northwest National Lab’s Environmental Molecular Sciences Lab, an Office of Science facility she has continued to use subsequently.

Berhe received her doctorate in 2006 and pursued postdoctoral work at UC Berkeley and UC Davis before taking on her current position at UC Merced. Since last year, she has also been serving as the interim associate dean of the UC Merced Graduate Division.

Combining her scientific work with speaking and writing for broader audiences, Berhe has become an increasingly prominent figure. In 2018, the National Academies selected her as a member of its first cohort of New Voices in Sciences, Engineering, and Medicine. Last year, the Carnegie Corporation named her as one of its Great Immigrants, an honor it awards annually to naturalized U.S. citizens for their contributions to “the progress of American society.”

Much of Berhe’s outreach involves spotlighting the role that soil plays in sequestering atmospheric carbon and thus in affecting the pace of climate change. At a TED conference in 2019, she remarked, “A six-feet or so of loose soil material that covers the Earth’s surface represents the difference between life and lifelessness in the Earth system, and it can also help us combat climate change if we can only stop treating it like dirt.”

Berhe’s efforts to promote diversity and equity have also increased in scale and prominence. Currently, she is a leading player in the ADVANCEGeo Partnership, a National Science Foundation-supported initiative to address sexual harassment and other abusive behaviors affecting workplace climate in the geosciences.

In nominating Berhe to direct the Office of Science, Biden is continuing to build DOE up as a key driver of his administration’s climate change strategy.

Energy Secretary Jennifer Granholm has spoken frequently about the department’s role in advancing clean energy technology since her Senate confirmation in February. Deputy Secretary David Turk, who was confirmed a month ago, was deeply involved in DOE’s efforts to promote clean energy internationally during the Obama administration.

The Biden administration has also restored the role of under secretary for science and energy, which previously existed from 2013 to 2017 with the aim of improving coordination between the Office of Science and DOE’s applied R&D offices. Biden has not yet picked a nominee for that job, but it is currently held on an acting basis by Kathleen Hogan, who formerly held a leadership role in DOE’s Office of Energy Efficiency and Renewable Energy.

(Update: Shortly after this bulletin was published, Biden announced he is nominating University of Oregon chemist and physicist Geraldine Richmond for the under secretary role. Richmond is a former chair of DOE's Basic Energy Sciences Advisory Committee and a longtime member of the National Science Board, which oversees the National Science Foundation.)

Berhe’s selection suggests that the Office of Science will be tightly integrated into Biden’s climate agenda, including potentially in support of Department of Agriculture-led land management initiatives, which were discussed at this month’s National Climate Task Force meeting.

In addition, Berhe will steer the Office of Science’s ongoing efforts to promote diversity and inclusion at the national labs and among its extramural grantees. Although the office ramped up those efforts during the Trump administration, last fall particular training sessions at some national labs and elsewhere in the government prompted a White House order that led DOE to suspend all diversity training. Biden has since revoked that order.

Among the other issues Berhe will face is DOE’s ongoing efforts to bolster research security, particularly at the national labs, which involves navigating thorny questions stemming from their work in both open and restricted research.

The Office of Science is also continually occupied with managing an array of facilities and construction projects while also funding researchers through grants. Berhe will face significant pressure in balancing these efforts. For instance, the office’s High Energy Physics program is currently working to restructure its flagship neutrino project in view of lags in international contributions, even as funding for individual researchers is squeezed by that and other major projects.

Similarly, the office will continue to focus on priorities such as completing work on new exascale computing systems and ramping up its contributions to the national initiatives in quantum information science and artificial intelligence.

Berhe will have the opportunity to outline the Biden administration’s particular priorities for the Office of Science when her nomination comes before the Senate Energy and Natural Resources Committee.