Decadal Survey Aims to Elevate the ‘Physics of Living Systems’

The National Academies has released its first-ever decadal survey on the ‘physics of living systems,’ which recommends coordinating fragmented funding sources and education programs to help biological physics cohere as its own branch of the physical sciences. 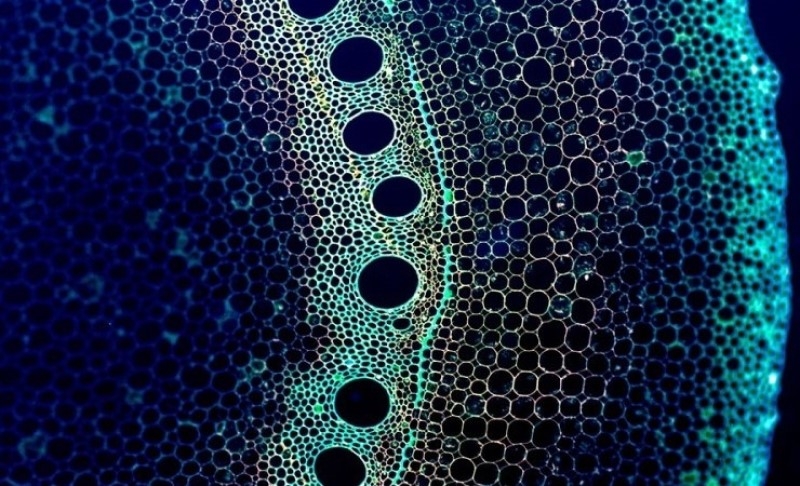 A cross section of a plant stem viewed under a microscope.

Last week, the National Academies released a decadal survey of biological physics, also called the “physics of living systems,” recommending actions to cement the discipline as its own field of physics rather than as an application of physics techniques to biology. The 13-member survey committee concludes biological physics has “emerged fully” as a field on par with astrophysics and condensed matter physics and that it warrants more focused attention from federal funding agencies and physics educators.

Sponsored by the National Science Foundation, the committee was formed two years ago and was chaired by Princeton University biophysicist William Bialek. In a statement on the study’s release, Bialek remarked that “realizing the full potential of the field requires that we rethink how to teach physics, biology, and science in general, revise fragmented funding structures, and welcome and nurture diverse aspiring scientists.”

Taking a deliberately expansive view of biological physics, the survey report defines the field as “the effort to understand the phenomena of life in ways that parallel the physicists’ understanding of the inanimate world, prizing the search for new physics that does not have an obvious analog outside the living world.” It observes that crosscutting advances have made it possible to “find the physics” in ever-more complex living systems, “ranging from the folding of proteins to the flocking of birds, from the internal mechanics of cells to the collective dynamics of neurons in the brain.”

While the breadth of biological physics has contributed to its scientific successes and applicability to socially relevant problems, the survey argues that the field has suffered from the scattering of its funding sources across agencies such as NSF, the National Institutes of Health, and the Department of Energy, and that its overall funding level is “dangerously close to the minimum needed for the health of the field.”

NSF currently has a “Physics of Living Systems” program that funds research at scales ranging from single-cell dynamics to the collective behavior of animal populations, and the survey lauds it as the only federal program that “aims to match the breadth of the field as a subfield of physics.” However, the survey laments the program’s budget is one-fifth the support that NIH allocates to the field even though it has no dedicated program for it.

“If individual investigators cannot support their research programs through NSF, they are driven to other funding agencies that fragment the field in various ways and de-emphasize connections to the rest of physics,” the committee argues. As a remedy, it recommends the federal government invest “substantially more resources” in the agency so that it can increase grant size without compromising the breadth of its activities.

Over the past decade, the committee estimates NIH made about 170 grant awards per year to researchers whose primary affiliations are in physics or biophysics departments, amounting to approximately $60 million annually. The committee describes it as “remarkable” that these awards came from 75 of the roughly 200 study sections that NIH uses to review grant applications.

Accordingly, the survey recommends NIH form study sections devoted to biological physics “in its full breadth,” arguing that in the current system “young investigators especially are pushed toward defining their work in relation to the communities represented by the study sections, thus working against the emergence of biological physics as a field of physics.”

Examining DOE’s connections to the field, the survey outlines the department’s long history of supporting research on the biological effects of radiation as well as its lead role in the Human Genome Project. Currently, DOE’s Basic Energy Sciences and Biological and Environmental Research programs support a large portfolio of research and user facilities directly relevant to biological physics, such as X-ray and neutron sources that are used for tasks such as characterizing protein structure.

To solidify DOE’s role, the survey calls for Congress to explicitly expand the department’s mission to include partnering with NIH and NSF to construct and manage user facilities and infrastructure relevant to biological physics. It points to the Collaborative Research in Computational Neuroscience center jointly funded by NSF and NIH as a successful model for such interagency partnerships.

The survey also examines the contributions of the Department of Defense, industry, and private foundations. It finds DOD’s support to be both “qualitatively different” than that provided by NSF and NIH, focusing on larger, multidisciplinary collaborations. It recommends that DOD examine opportunities to increase funding for biological physics through its Multidisciplinary University Research Initiatives program, which can support budgets in the range of $3 million to $5 million over several years, and it encourages NIH and NSF to consider likewise supporting such mid-size efforts. 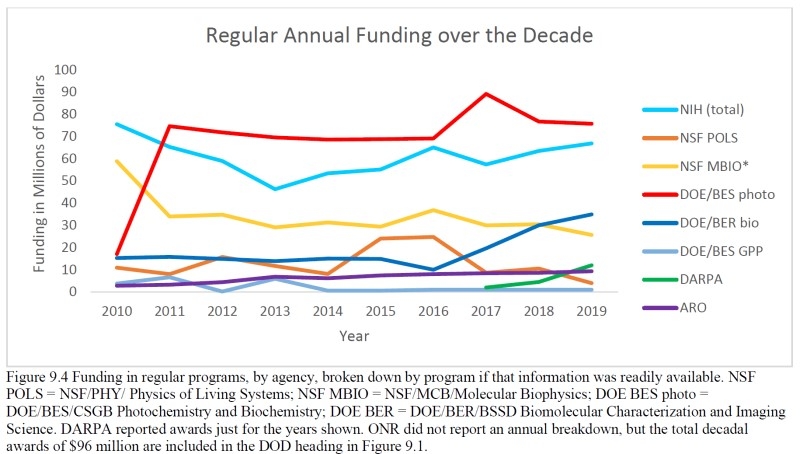 Addressing the state of the biological physics workforce, the committee argues present funding levels are “barely consistent with the minimum needed to maintain a steady flow of young people into the field.” But beyond resource limitations, it stresses the discipline is not prominent in university curricula, stating that “it is quite possible for today’s undergraduate student to earn a degree in physics without ever encountering the physics of living systems.”

Accordingly, the survey recommends that physics departments at research universities build “identifiable efforts in biological physics” and fund undergraduate research opportunities in the field. It also encourages federal agencies to better integrate support for education and research activities, stating that “current models for support of undergraduate research perpetuate a sharp distinction between the core curriculum (education) and the development of the scientific workforce (research).”

Making the case that biological physics would bring a new dynamism to physics instruction, the committee states, “Typical core physics curricula today hardly require undergraduates to learn anything that happened after 1950, while modern biology and computer science focus on ideas and results from after 1950. Should we be surprised, then, to hear people speak of physics as the science of the past, while biology and computing are the sciences of the future?”

It recommends agencies make “new resources available to support core undergraduate physics education for underrepresented and historically excluded groups, and the integration of research into their education,” with a central role to be played by Historically Black Colleges and Universities and other minority-serving institutions, which train a large share of STEM students from these backgrounds.

In addition, the survey raises concerns that a growing number of international students in the U.S. feel the country is “unwelcoming,” citing reports of widespread fear stoked by the Justice Department’s prosecution of researchers through its “China Initiative,” among other developments. To help mitigate such sentiments, the committee recommends federal agencies and private foundations create programs dedicated to supporting international students in physics doctoral programs.