The Department of Energy has launched an Office of Clean Energy Demonstrations to support a burgeoning portfolio of large-scale technology projects funded by the Infrastructure Investment and Jobs Act. The office will be under pressure to overcome challenges that have plagued DOE-funded demonstration projects in the past. 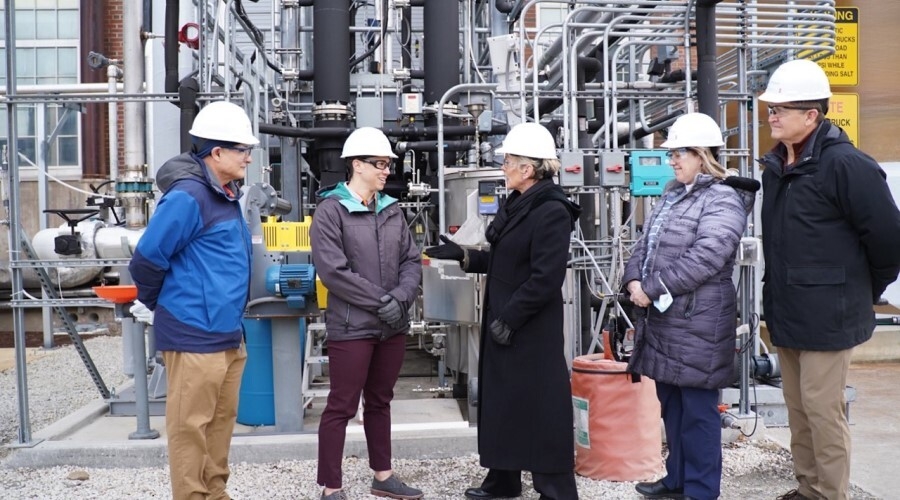 The Department of Energy announced in December that it has launched a new Office of Clean Energy Demonstrations (OCED), which is set to receive $21.5 billion through the Infrastructure Investment and Jobs Act. The office will in turn fund large-scale technology projects in areas such as clean hydrogen production, carbon capture, grid-scale energy storage, and advanced nuclear reactors. A few other such projects will be funded through existing offices, most notably a set of four “regional hubs” for capturing carbon dioxide from the atmosphere.

Although DOE has previously funded large technology demonstrations, its obligations under the infrastructure act well outstrip its current project oversight capabilities. Across the entire department, DOE expects to hire about 1,000 employees in response to the infrastructure act to help staff what it is calling a "Clean Energy Corps." In a statement on OCED’s launch, Energy Secretary Jennifer Granholm remarked, “This new office will hire the best and brightest talent to invest in cutting-edge clean-energy projects, and DOE is calling on anyone dedicated to addressing the climate crisis to roll up their sleeves and join us.”

DOE’s past record in supporting demonstration-scale projects foreshadows the challenges that lay ahead. Last month, the Government Accountability Office released a report reviewing 11 carbon capture and storage demonstration projects DOE undertook between 2010 and 2017, which together received $1.1 billion in funding. Of those, GAO states that only three were completed, largely attributing the failures to economic factors but also identifying shortcomings in DOE’s project management. In its response to GAO, DOE indicated the new demonstration office will be tasked with developing a “corrective action plan.”

The Biden administration first proposed creating OCED in DOE’s fiscal year 2022 budget request, seeking $400 million for the office’s first year. The department envisioned at that time that it would issue at least one “technology-neutral commercial-scale demonstration solicitation” per year, with a focus on addressing energy challenges that cut across technology programs, starting with energy storage.

As funded by the infrastructure act, OCED’s first-year budget will be more than $5 billion, not counting any funds that may yet be provided through the ordinary annual appropriations process. The act does not allow broad discretion on how the funds are to be spent, dividing the $21.5 billion multiyear total between specific efforts, including:

The act also establishes that the term “clean hydrogen” should mean “hydrogen produced with a carbon intensity equal to or less than 2 kilograms of carbon dioxide-equivalent produced at the site of production per kilogram of hydrogen produced,” while allowing for the possibility of future revision of that definition.

To inform its upcoming activities, DOE has already issued requests for information related to hydrogen production and the capture of carbon from the atmosphere and point sources. The RFIs are directed to a range of stakeholders, including industry, investors, academics, and government agencies, as well as “potentially affected” groups such as “environmental justice” and “energy transition” communities. DOE is seeking input on matters such as available technology, science needs, potential site locations, expected carbon reduction, potential job production, and diversity, equity, and inclusion considerations. It has already finished gathering input from the hydrogen production RFI and reviewed responses at a webinar last month.

DOE has not yet named who will lead OCED. For the moment, the office is under the acting leadership of career DOE official Kelly Cummins, who is serving as its principal deputy director. It reports to the department’s under secretary for science and energy, Geri Richmond, who was confirmed to that role on Nov. 4.

Of the 11 demonstration projects reviewed by GAO, eight were located at coal power plants as part of two efforts: the Clean Coal Power Initiative and the FutureGen 2.0 initiative. DOE terminated four of the projects, and three award recipients withdrew, two before receiving any funds. The remaining project, the Petra Nova facility located at the W. A. Parish Generating Station in Texas, was completed in 2016. The project offset its operating costs by using the carbon it captured for enhanced oil recovery, but it was forced to shut down in 2020 as low oil prices made it economically unviable to operate.

DOE also funded three projects through a program called the Industrial Carbon Capture and Sequestration Initiative. Of these, two were completed and remain operational: a hydrogen production facility in Texas run by Air Products and Chemicals and an ethanol plant in Illinois operated by Archer Daniels Midland. The third contract was withdrawn when the methanol facility it was to be connected to was cancelled.

The GAO report suggests that economic conditions connected to the declining fortunes of coal power and uncertainties in carbon markets were a primary factor in the failures of the projects at coal plants. However, the report also asserts that DOE’s contracting and project-management practices increased the risk of failure, stating the department undertook expedited negotiations of project proposals. DOE officials told GAO the speedy process was due to the department’s desire to begin spending funds from the American Recovery and Reinvestment Act of 2009. In addition, the report states DOE failed to impose cost controls as estimates changed, leading it to spend almost $300 million more than planned on the funded phases of the projects it eventually terminated.

To mitigate these sorts of risks, the report recommends DOE incorporate a down-selection for all future demonstration projects and allow adequate time for negotiations prior to entering into cooperative agreements. It also suggests DOE should work to more consistently oversee projects against concrete scopes, schedules, and budgets.

At a hearing in October, the House Science Committee raised concerns about DOE’s contracting practices surrounding four contracts totaling about $2 billion that the Office of Nuclear Energy recently awarded on a noncompetitive basis. In a written statement, Committee Chair Eddie Bernice Johnson (D-TX) indicated her concern over the subject is connected to DOE’s past record on carbon management projects and noted the requirement for the GAO report was included in the Energy Act at the behest of the committee.

Offering lessons for the future based on DOE’s past shortfalls, she remarked, “Risk-increasing factors can be mitigated by ensuring the awardee pays its fair share throughout the process; by setting — and sticking to — performance milestones; and by competitively awarding these projects.”